So far, we’ve worked out:

There are hiccups to fix, fx to design, and other use cases to figure out, so far it’s been fun. Thanks to @tdmusic, @sezare56, @davemech, @aaanicholls, @Doug, @Gino , @bloody.water , and anyone I missed, for the collaborative brainstorming and troubleshooting… [Edit: also inspired by a tip I saw, but then had trouble finding again, on DT tips from @Gerry_Dorsey Digitakt tips and tricks - #124 by Gerry_Dorsey on previewing trigs with sequence running. Nice one!]

@Humanprogram Please post your videos, @tdmusic too !
This is inspiring, I hope to make something crazy with it. But I’m not sure I’d use AFX like this all the time !

I could try freeze delay, with additional lfo on delay time to make the loop pitch up or down. Efficient ! Btw I’m not sure if I chose the right lfo : Saw, with phase 64, in order to have a neutral start, and Half mode. But it makes a crazy artefact at the end…
Better idea ? (Will try phase 63 or 65)

Not sure how to use reverb in the loop too…

Solid! These are the tricks that keep trickin

thanks for finding this magic @Humanprogram

Video of the transition trick 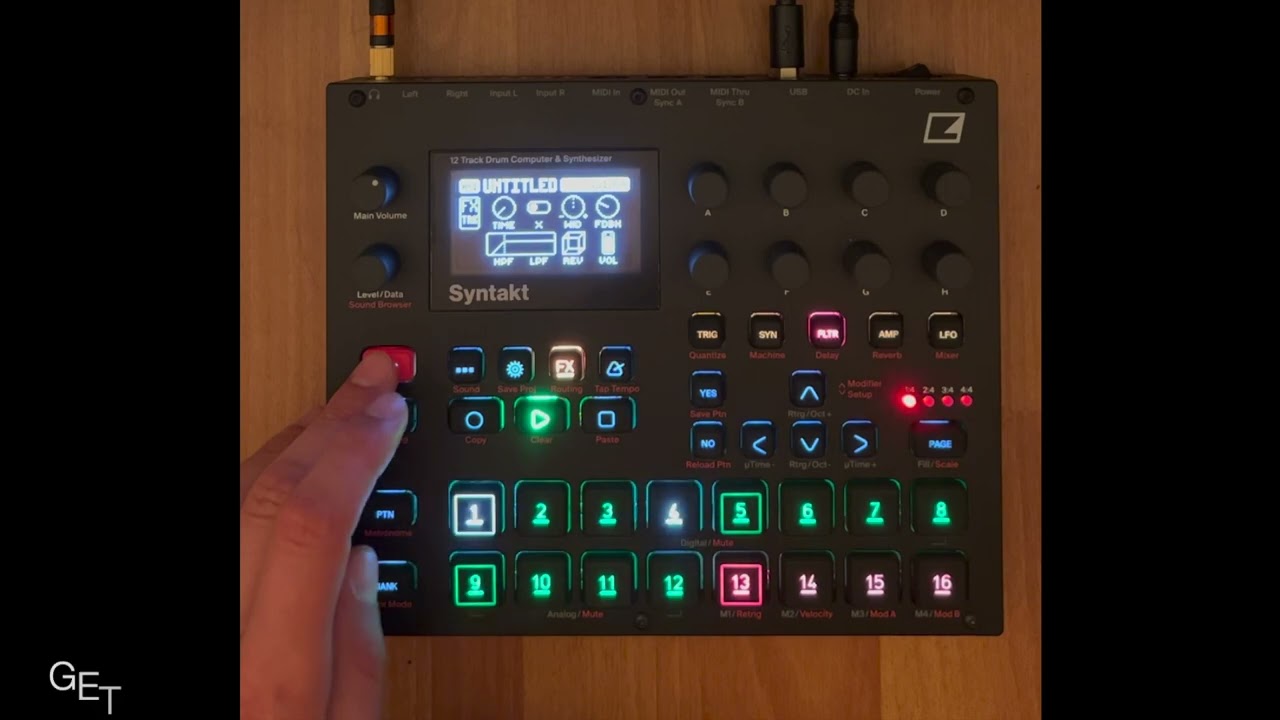 Excellent technique! Great work @Humanprogram!
I’m going to set this up and experiment with some effects tonight!

I could try freeze delay, with additional lfo on delay time to make the loop pitch up or down. Efficient ! Btw I’m not sure if I chose the right lfo : Saw, with phase 64, in order to have a neutral start, and Half mode. But it makes a crazy artefact at the end…
Better idea ? (Will try phase 63 or 65)

I’m still figuring out how to tame both DEL TIME and reverb, s. I’m not sure if you’re asking about the delay time LFO or the Amp LFO here, but since it’s not in the video:

Artifacts come in with any sudden change in DELAY TIME … maybe in what you’re trying with pitch shifting you could set the ramp LFO to end on the DEL TIME value the track starts with?

I’m going to set this up and experiment with some effects tonight!

Solid! These are the tricks that keep trickin

This is inspiring, I hope to make something crazy with it.

Thanks! Looking forward to seeing what kinds of things you all come up with!

On freeze delay trigs: Remembering to note here that in theory one should be able to use the AHD envelope rather than an LFO to fill the delay buffer, and to have the Hold length to Note (127), and swap Decay between INF and zero with the trig, then set the Length parameter on the Trig page to match DEL TIME. Much easier than the LFO math, but I can’t seem to get it to work as expected (short bursts or ordinary delay buildup depending on the setting). Thought I’d mention in case anyone had ideas or success.

For the time being, it seems this site has pasted in my Notes app table of values nicely in markdown, great:

@sezare56 asked about how to use reverb in the freeze loop above, and I think this is the answer…

If you freeze a 1 bar loop with a big reverb on a snare, you’ll hear the reverb signal in the background, in time with the sequencer (and not the delay buffer). Is that the problem you’re trying to solve?

If I’m understanding that correctly, you can route Reverb into FX , which will then capture the reverb inside a freeze loop. But then in the FX track reverb will be shaded out.

Ideal for clean freeze delays but won’t allow effects that turn reverb on and off. (I think I plan to send Reverb but not Delay to FX routing for most applications.)

A couple related notes: the FX block controls reverb and delay settings for things that aren’t routed to it, so a single FX track setting or trig could be adding drive or filter to one set of tracks (that are routed to FX) but not sending FX to delay buffer, while adding chorus (by modulating delay time) to any individual track with delay turned on.

Parallel or double routing—FX and individual tracks both sending to reverb or delay at the same time—is possible if reverb or delay is not routed to FX in the FX routing page. So far it’s useful to know as a reason things sound bad rather than a feature to exploit.

Writing all this out because I’ve found it a little confusing—and if I’m mistaken, anyone, please let me know.

I didn’t test again. IIRC, if reverb is directly sent to Main, you can hear reverb sent in background during the freeze delay, unless you cut it with a negative lfo…

With reverb sent to AFX, I heard an annoying doubled sound during freeze recording…

I’ve been refining the freeze delay (the no-artifacts method of filtering out delay on reset works well) and have found that cue-able filter sweeps are easy and useful. Details and settings listed on-screen in this video. There’s also a slowdown turnaround where the music eventually begins to mock my clumsiness… 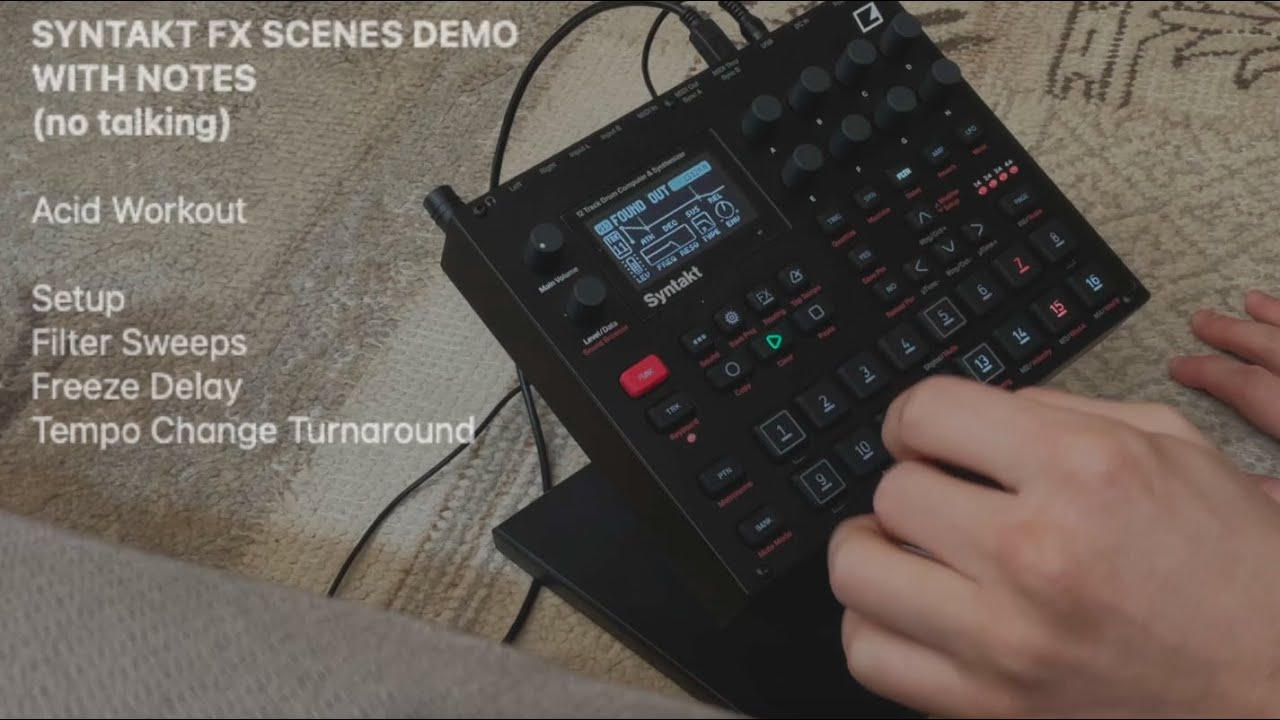 With reverb sent to AFX, I heard an annoying doubled sound during freeze recording…

I haven’t been able to replicate this, but have noticed that sending a track to delay and sending FX to delay doubles the effect and adds some unexpected overtones.

This is great, I guess some of this would apply to RYTM and A4 as well then!?

this would apply to RYTM and A4 as well then!?

I think so, but it would concern fx control only. No filter / amp control, no fx send.

Can you elaborate on this? Maybe I missed it. Cheers

@tdmusic Sure, just that—inspired by your filtering the frozen delay out in your transition trick, actually—the “reset” trig can both filter out the delay and turn off delay feedback. That way it won’t give any unwanted/extra repetitions of the buffer or do a “pew pew” due to the delay time change, which was all over my first freeze delay demo. The settings for reset trig:

I found out that freeze delay and other elements here can also be done on the Digitakt (and in theory DN), with a midi loopback setup. A few things to bring back to ST for these tips:

FX “song mode”: 1/8 scale on the sequencer is perfect for sequencing effects scenes across a 32-bar song section (or longer with conditional trigs).

Freezer burn: the delay buffer persists after turning down delay volume. So it’s possible to capture a delay loop with one trig, seamlessly continue the song with a second one (Amp vol up, delay volume down), mangle the sound if desired, and bring it in later with a third trig (del vol up, amp vol down).

“Looper”: With the delay buffer running, you can add to it, of course. Turning up a track’s delay send will add new notes played on it to it, like a 1-bar looper. There’s no undo, so it requires perfect timing (or a keyboard with clock-synced arpeggiator).

Quick OS 1.10 update and other tidbits. You might need to update existing FX scene trigs:

FX LFO targets changed:
Confirmed all the above still works, but for some pre-existing freeze delay, delay-based resampling, or other FX LFO-to-AMP/ applications, you may need need to change the FX LFO target for those trigs after the update. (My Del Send trigs got moved to Amp Drive, which both didn’t work and sounded Bad and Loud.)

FX/Song Mode:
For Fx sequencing In the new song mode, conditional X:Y trigs still work between rows, but my favorite 1/8-scale trick for sequencing FX across 32 bars loses its luster since that count resets on each new row (as expected).

Performance Macros:
The new Velocity-to-Volume options in Sound Setup technically make for a new, non-MIDI-loopback macro option: to set 4 params and use velocity trig mod or velocity on the trig page (but I’ll likely stick with the MW/BC/AT/PB macros with loopback since I typically use velocity for basic dynamics).

Sidechain + Scenes:
Quick tip I’d meant to add somewhere, to use 1/4 note sidechain amp ducking and Fx scenes in the same track, retrig @ RATE 1/4 and LEN 64 works like a charm.

Resampler/Sample chopper:
Also, on ST Tips and Tricks I shared a video on using the delay as a sample chopper, by filling a 2-bar freeze delay out of order.