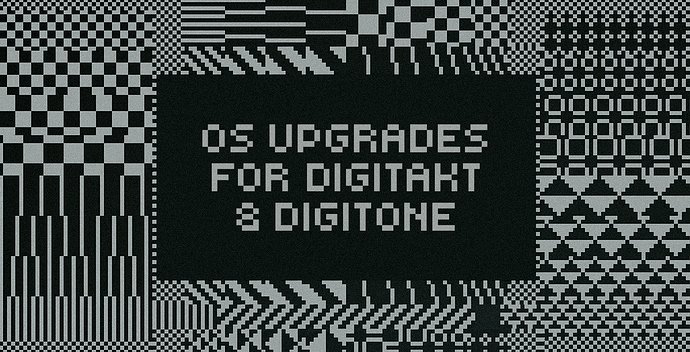 Get yourselves ready for some serious OS upgrade fun for the Digitakt, Digitone, and Digitone Keys. Time to get elbow deep in a host of cracking features that will make each device even more powerful and your music-making experience even sweeter.

Class Compliant USB Audio has come to the Digi machines. Connect your Digitakt or Digitone to a compatible phone, tablet, or computer, and easily capture the audio recording from your unit on the fly. And this is just scratching the surface of what is possible. Hook up to all kinds of apps to add extra control in any number of ways: more effects, more LFOs, more freedom.

A new sequencing mode is available on the Digitakt and Digitones - Step Recording. This feature lets you input chords and notes into the sequencer step by step. Or use jump mode to skip to the next predetermined spot in the sequence via the Length parameter, making it even easier to control your melodies and build them a step at a time.

Stay a step ahead of the pattern with Trig Preview on the Digitakt and the Digitones. You can now preview individual trigs whenever you want, without having to wait for the track to catch up.

The Digitone Keys and Digitone now have four different Play Modes to choose from: Switch between Poly, Poly with mono LFOs, Mono, and Mono Legato and gain deeper control of envelopes and LFOs, and increased playability.

You can now use Parameter Randomization on the Digitakt to shuffle sample slots. And keep your sample list or sound pool better organized across all Digi machines with easier removal of unused sounds. Purging power, leveled up.

For a full list of improvements and bug fixes, check the release notes.

To use the upgraded Digi OS with Overbridge, please update to Overbridge 2.0.39, also released today to support the new firmware.

Added the possibility to select all unused Sounds in the project’s Sound pool.

Added the functionality to control Voice Reuse per track. It sets if the same note played twice should reuse the same voice, or cycle to use another free voice (default setting).

[Digitone Keys] Added the possibility to select if the Pitch Bend and Mod wheel should affect only the currently selected track or all tracks simultaneously.

Separated TRANSPORT from CLOCK send and receive settings in the SYNC menu.

[Digitone Keys] Added the possibility to select track in the Control In modulation setup.

Added snap values for the LEN parameter on the TRIG page.

Added snap values for the LENGTH parameter when pressing [FUNC] + [UP] / [DOWN] in the SCALE menu.

Improved graphics for the algorithm on SYN1 and SYN2 pages. It now indicates the operators affected by parameter changes.

The user is now prompted to select SysEx transfer interface when sending project backups, and USB+MIDI is selected.

Improved the visual feedback from the [REC] key in LIVE RECORDING mode. The [REC] key now blinks per beat independent of the sequencer position.

It is now possible to live record Sound pool Sounds from the Sound Manager or Sound Browser.

Performing a track mute always applied GLOBAL mutes when in GRID RECORDING mode even if the most recently used MUTE mode was PATTERN mute.

Certain combinations of SCALE settings on the MIDI tracks could sometimes lead to that the first step of a pattern being played once more when changing patterns.

Trig Conditions did not function correctly under some circumstances when using SCALE PER TRACK.

The first slot in every modulation settings could disappear after rebooting the device.

Sound locks affected the display of the parameters on the FX pages even though these parameters are not part of a Sound.

When using the TRACK NOTE method in GRID RECORDING mode, trigs could in some cases get added to the wrong track.

An arpeggiated Sound played manually had its arpeggio interrupted when the sequencer played a note trig on the same track.

The dotted values for the delays TIME parameter were displayed incorrectly.

Character selection using the LEVEL/DATA knob in the pop-up naming window did not behave correctly.

Pressing and holding FUNC , and then turning the knob for the DELAY TIME parameter now makes the parameter snap to on-beat values.

The sequencer could be out of sync when using scale per track if the previously set scale per pattern value was not 1x.

The reload function of the FX parameter pages did not work correctly, even though the RELOAD PAGE message appeared.

The revert CONTROL ALL function only reverted the active page.

Parameters could get inverted when modulated with pitch bend at -64.

Pressing [FUNC] + [UP] / [DOWN] to set the TRACK LENGTH in increments of 16 in the SCALE Menu did not work.

In some cases, it was possible to place trigs outside the range of the current track.

When changing between patterns that had different AUDIO ROUTING settings, the new pattern inherited the routing of the previous pattern instead of loading its own settings.

It was not possible to clear TRACK LEVEL, MIX LEVEL, or PATTERN VOUME by pressing ENCODER + [NO] .

It was not possible to randomize or reload FX pages on MIDI tracks.

A fixed (non-synced) BPM MULT setting on one LFO could, in some circumstances, affect the tempo of other LFOs.

Aftertouch modulation cut off Pitch bend modulation when an external MIDI controller was used to interact with Overbridge over USB MIDI.

All settings and empty patterns in the factory project were not cleared when performing a factory reset.

When receiving external MIDI notes in LIVE RECORDING mode, only the first played note’s velocity in a chord was recorded. The following notes instead got the default velocity parameter value.

Parameter locking LFO values for MIDI tracks had no effect.

The device did not listen to the MIDI CC All Notes Off.

Hot damn!!! Looking forward to this!

P.S. For anyone trying to use transfer to update your machines. you can’t be in “overbridge” usb mode. you need to be in USB midi mode.

Omg, yes, thank you so much @Elektron

And so many of our feature requests over the last year or so are now here. Amazing!

For anyone familiar with the Monomachine, This is identical functionality that’s been expanded upon with the Jump mode. letting you set up a pattern in more than just solid 16th notes.

USB compliant now means direct to iPad recording right?
I wonder if I can sample from iPad to DT over USB now…that would be crazy!

Such a huge update for both machines

I created a video where I go into the biggest new features and some of the smaller improvements and bug fixes I personally am very happy with. I Also explain how some of the new features work step by step. 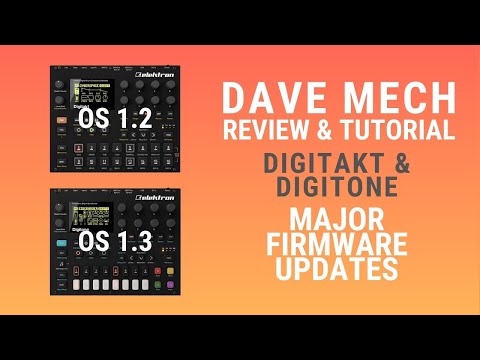 Really looking forward to playing with step record mode, I love it on the Monomachine and it will be even better on the 'Tone with scale per track.

Wow, looks like a really nice update. Looking forward to diving in after I finish my current project!

Yes! One of my wishes on the feature request thread for ages

Yay, well done Elektron team, look forward to checking these out! Step recording looks awesome, I’ve been loving the simplicity of the sequencer on the SH01a recently and looks like this is similar. Also big thanks for bringing over “chance”, I love this feature on Model:Cycles and was almost thinking of getting a Model:Samples just to have that feature for samples

Think the only real things on my wishlist for these machines now are:

This is excellent, Elektron! Thank you so much!

Step Record mode is such a blessing for the Digiboxes, sequencing music on these boxes has become much more swift and efficient!

And long live the Probability!

Next up we need Overbridge on iOS…

Yes!! Thank you! Hoping some problematic issues are part of history now

I was just thinking this morning that I should get round to updating my Digis this week. My Digitone is still on 1.02!

I’m in for a bloody treat.