TL;DR —> I’m basically going for quality and workflow over quantity these days as I’m lazy and have ADD lol.

So here I am along with many of you still in quarantine. I realize that even with all this time on my hands, I still don’t have enough time, focus, drive, energy, and patience to get into all the machines I’ve ended up with over the past several years. Most of my gear is Elektron so that’s why I’m posting and asking here. I bought most of them when I had a good paying job (left the corporate world since). So here is what I have in my studio so far (I’ve marked with an asterisk * next to gear I plan to keep for sure)

Despite having a lot of hardware, I’m not a hardware purist at all. In fact, over the past 2 years I’ve made most of my music on iPad then did the refinement and mixing in the DAW. I’ve used hardware for live shows though. As you can see, most of the gear I didn’t place an asterisk after so I’m open to getting rid of it. I’ve used the Octatrack, K-Mix, H9, Heat, and Kaoss Pad 2 only for live shows. The Octatrack was the main part of my live shows, but I’m not playing live at this time due to the lockdown. I still find the Octatrack a bit frustrating, unintuitive and I’m still not an expert in it. One of the reasons I never got into the RYTM, Analog Keys, and Digitakt is because I spent sooooo much time trying to tackle the Octatrack. Not sure it’s been worth it though. I love the Digitone though and it’s for sure a keeper. The HEAT hasn’t gotten much use aside from using it as a saturator and fattener for live shows.
The K-Mix, Heat and H9 are all $500 pieces of gear I’ve used when I played a show every few months. Not sure I need such expensive pieces of gear that are somewhat limited.

I’m thinking the weakest link in my chain is having such old computer computers despite the SSD drive upgrades. My MOTU is a workhorse but a bit long in the tooth. I’ve been eyeing the newer MOTU M4, SSL 2+, Audient EVO 4 despite only 2 or 4 channels versus my current one with 8. But I don’t like having a ton of gear on my desk at once anyway. Due to being unemployed I can only afford a newer a new computer (looking at Mac Mini 2018) if I sell some stuff.

I can use newer Overbridge 2.0 with my Elektrons. My computer is too slow for 24 bit with Overbridge so can only use limited number of channels and in 16 bit. As I said, I didn’t really get a chance to use the Digitakt, Analog Keys, RYTM and to an extent the Heat too much so unless I can be persuaded to keep them, I may sell them.

I’m a disorganized ADD person who has realized having too much stuff if not good. I made my most recent album using one app on iPad and then exported to the DAW for mixing. Some variety and some hardware is good for me, but not the amount I have - especially teh complexity and depth of Elektrons. That being said, the Elektron workflow makes sense to me as I learned the Octatrack first (big mistake) so I’m not intimidated by them. As far as the RYTM, I don’t want a bunch of cables coming from teh back and would like to use it via Overbridge or stereo out only (maybe Digitakt is better for me?).

Sorry, for the long post, but id you guys can help me decide what to keep and what to get rid of it would be helpful. Sell almost everything and just keep Digitone, Digitakt and get a Polyend Tracker instead?

id you guys can help me decide what to keep and what to get rid of it would be helpful.

Nobody can tell you what specific items to sell or keep, because that’s a very personal question of taste.

But you could try boxing it all up as if you were going to sell it. Then think to make some music and see which item(s) you reach out for.

I hope it works out for you. I think you will shed some burdens.

Nobody can tell you what specific items to sell or keep

I just went for it

I know how you feel.

I consolidated everything into 1 portable Eurorack system. I can sit on my sofa / bed and produce proper tracks with full composition and interesting sound design, FX and basic mixing.

Then plonk it on my desk and record individual outs, mix and polish it.

I have a few synths loitering as for example I can’t do poly stuff in the case. So if I can ever be bothered I can sample some and use it in the Eurorack sampler I have.

The whole process took an entire solid week to decide what to sell, totally redo my studio, organise my Euro case, list everything and iron out a few technical issues.

But I’m super excited about this new, much more simple (but very capable) setup.

For me having too many separate things is just a massive pain. Also, I love Elektron but I want to compose full tracks, and not have to sit at my desk with 20 boxes to get it done. So Elektron is totally gone now.

I will add that without a few years of experience with Eurorack I would not have been able to achieve such a well thought out, flexible and relatively compact case size for all the functionality. It’s been a big learning process over a very long time.

You can. I won’t feel offended lolz.

That’s cool you did that. Unfortunately, I have no interest in modular and never considered that route. It would only complicate my life and every time I look at most modular setups, all the wires give me anxiety. I’m a minimalist at heart.

I’m also a minimalist. I’ve designed a simple box that does everything I need. It’s low profile, compact, and with right angled cables, very neat. When it’s not in use it has a lid. I don’t need to even look at it, and that keeps it dust free.

I’m a minimalist at heart.

The Dark Trinity plus an H9 is capable of SO much, especially when you’re limited to only that. I could see adding a pedal or two, maybe a small outboard compressor so you don’t have to futz’s with the OT compressor.

I would start with the keys and the octatrack.
But I’m very very minimal.

I’m confused. Do you mean get rid of the OT and AK or keep them?

I meant I would keep at first the a4-keys and ot.
You can feed ot with sounds from the computer, the a4 has good sound, good keys.
Both have song mode and a good sequencer, and with downmixing on the ot there is plenty of tracks.
For me this could work. Perhaps for you too.
I only have Octatrack and 707, a “guest” synth (fm or mono - it depends), a laptop and midi keys. That’s more than enough for me. I shelved the audio interface too (I keep it, because I can program my retrokit cable with it - but I only use it if I need it for this). I use the 707 as interface.
It’s pretty minimal - takes only 70cm x 90cm space… 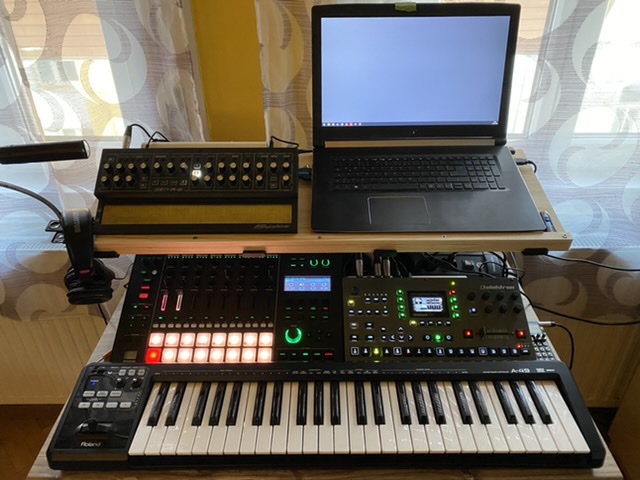 I found myself very productive with just 2 machines, one drum machine/sampler and one synth, or 2 synths.

When I work with more than 2 machines I found myself less productive.

I also think that computers, iPad, tons of plug-ins/software can be a limit to productivity.

You will be end up using each item at 5%/10% of its capability because you will not know each machine very well.

The best electronic music has been made with minimal equipment.

Simple test: Does it spark joy in you?

The Life-Changing Magic of Tidying: A simple, effective way to banish clutter forever

I went through this earlier this year, sold most of my stuff I didnt use, bought an iPad Air and the best apps I could find, and in the last couple of months I have been more productive than in the last 10 years. With my iPad and korg nanokontrol I can make tracks whenever and wherever I want, the plan is to set up a very small studio for editing, mixing etc with only one synth and a drum machine which I can use to add to the iPad ideas or maybe an analog heat to use with iPad. Still not decided on this yet.

My ”saviour” has been the MPC Live.

Having a great (and somewhat portable) central hub and sequencer has made my music making much more enjoyable and I feel like I don’t need as much clutter and other gear anymore. I do everything in the Live and if I like what I’m hearing, I hook it up to the rest of my setup and try to find the best possible sounds for the track I’ve made. All the bare bones work is done in one box.

Your a ‘minimalist at heart’ with all that stuff. Am i missing something?

My advice - sell this to me instead!

Until now OT mk1 has been providing drums on tracks 1-4 but it’s time to free those up to dive into sampling/resampling and add some drum synthesis capability. In lots of ways, Rytm mk1 seems a no-brainer to me, but I could also see Machinedrum (of course), Tanzmaus/Tanzbar, Tempest and maybe a Jomox. Leaning towards analog drums since I can always use digital samples (OT/MPC2500). Had a MDUW in the past and didn’t gel with it - but that was pre-OT so now I understand Elektron workflow and seq…

Sell everything except 1 machine and 1 computer

I’d say if you’re going to go minimal, really go minimal – don’t half-ass it. Commit to the concept and see how it works for you. Box everything up (take photos first), and stick it in the corner. That way, if you decide to sell it, you can just make a listing. You don’t have to pull it out off the box and get all sweaty, second-guessing whether you would keep it.

I’ve been having fun with just an Octatrack lately, which is making me seriously consider shrinking down to that and one synth. That one synth may end up being a biggie (OB-6 or similar… SYNTRX??), But that more than enough for me. Damn, now my brain is starting to get going on this concept… Good luck to you.

simple solid and effective advice there.