I have developed a small box which will take a dinsync (sync24) input and it has 2 outputs on a 3.5mm jack that send 8th note and 16th note pulses, so it is ideal for syncing Monotribes, SH-101, Volcas, new Electribes or any other gear that requires a 5v trigger pulse, so it is ideal for A4, Akeys or Rytm or vintage dinsync gear to send clock to many other kinds of sequencers, or even modular stuff.

It comprises of a small ABS box, with a dinsync input and 2x 3.5mm outputs, - ideal for Volcas, Monotribes etc. or other gear, the output pulses are 5v and 5ms duration, which in testing works well with a wide range of devices. It supports the full tempo range of the Sync24 spec (officially 40-300bpm)

I have tested it using the following gear as sync24 master:

Right now it is in the late prototype stage, and I’m working on the final design, the feature set is now set in stone though, there is no swing or anything fancy, I tested swing but decided against it for a number of reasons, namely to reduce cost, lots of x0x devices do not have swing, and Volcas and Monotribes do not work well with swing due to the way they act on clock pulses (16th notes derived from 8th notes)

It works very nicely and the advantage in particular for A4/Akeys owners is that it allows you to sync gear that does not have sync24 without using one of the CV outputs.

I am aiming for a target price of £55 plus shipping at cost, it requires an off the shelf 9-12v DC PSU with positive tip 2.5mm barrel connector which will cost you around 5 quid/bucks/euros from your local electronic outlet. I might also consider battery power if people want it as it is not too difficult to add.

Let me know if you might be interested, I will make a demo video in the next few days. Thanks!

the DT syncs the 'tribe beautifully via it’s clock out jack when running off it’s internal clock…great for when I’m in hardware only mode as the DT is my clock master. Super tight, even start/stops the Monotribe. …great.

However, when I want to slave all my hardware to Live 9 - Ableton becomes the clock master, driving the Dark Time via USB MIDI - this is all absolutely fine apart from the bloody Monotribe… which then goes absolutely crackers : I think it’s actually trying to sync at some super-fast ppqn value & no changes of settings ( clock divide ) on either the DT or 'tribe will cure it. This makes tracking the 'tribe down to Live a pain, as I have to just manually sync it : fine for short 2 - 4 bar bursts, but if I want some long evolving tweakery it all goes out of sync eventually…

So my plan is …as my other MIDI gear ( including the RYTM ) clocks tight as f*ck to the Dark Time, which is in turn sync’d as tight as to Live, then presumably the RYTM’s Sync24 out will echo out the timing info it’s getting via MIDI in ? If so, one of your clever boxes Daren will give me sync to the Monotribe via the AR’s din sync out…?

I guess I could just do with someone else confirming to me that the RYTM does indeed spit out decent Din Sync when it itself is running as a MIDI clock slave ? I haven’t got any way of testing that myself with current kit.

I’d deffo be up for battery op on this 'lil box Daren, if you can wangle it…

Not too sure how the Rytm dinsync works but I should imagine it is much the same as on the A4, the A4 will send dinsync if slaved to midi fine.

Yeah battery power is useful I think so will almost certainly add that, handy for 606 and Monotribe/Volca throwdowns!

I might also try to have 8th and 16th note outputs on their own sockets, gotta see if it is feasible first though before deciding…

Yep changed it now to both 8th and 16th divisions, works great!

. Full disclosure, i want to make my own, have done for a year, for the challenge, plus i have an unused TR626 i can program in 5v pulses, although audio level hits would drive the 'tribe. I’ve now given up on Elektron doing my year old feature request of a clock divider on the din ports, espcially now that i see that the din sync doesn’t work as basically as i thought, so kudos to Darren for bottoming that out. Using an arduino feels like a cop out for me, so without giving away any trade secrets what sorta technology/chips might i google about to deal with the counting of pulses, even if different from your own approach, noob friendly. I wanna get some parts to breakout the internal tap points in my DE mk1 rev2 and midify my monotribes so i’ll be putting in an order to CPC farnell and similar, found a company who stock the same doepfer jacks and toggles. I’d love to build a noise circuit if you know of a simple one linked online Daren

sorry to treat you like a consultant bud ! The rytm will be identical to A4 imho, proud new owner.

There are plenty of ways to do it, if you want to go hardcore use 4000series CMOS
http://fa.utfs.org/diy/a100/sync2clock/

Arduino is of course another way, and although I am the furthest from an expert that you could be at Arduino, there are plenty of code examples online to hack something together.

Really any 8 bit microcontroller should be fine, just a case of finding one that suits you best, maybe something like the Adafruit trinket perhaps, very cheap and good quality/support. (make sure to use the 5v one though)

For noise generator (assuming you mean noise as in white noise) then the easiest and in my opinion the best is to use 2 NPN transistors and a few passives, like this:
http://www.f4grx.net/a-simple-noise-generator/

If you mean noise as in noise synth then the Music From Outer Space stuff is brilliant, I have built a few of their designs over the years and they are easy and fun to make, the WSG is one of my faves, in fact I have a few waiting to be built at some point.
http://musicfromouterspace.com/

Ask an expert and thee shall be bamboozled

I think i understood the bit about white noise generation, that’s what i’ll look into, leave the clock dividing to the big boys

More likely to hunt down a book first, the idea of learning is appealing, rather that than burn my house down, maybe i’ll go down the arduino route though it seems OTT, i want to keep it for a random pulse/ geiger counter/dolphin type cv source tbh

Thanks for the useful prompts

Would be a neat thing to get, especially if you have cracked getting the pulse steady on the first of the 6 per trig,

I tell you what would make box even more indispensible would be if you had an option for a relay switch to be toggled open on the 1s or 1 and 9 or 1 5 9 etc so you could sync up tap tempo syncable devices like delays or loopers, well that’s actually another one of those pipe dream ideas i have

A battery option would be great for a device like this, way to go !

Heh, I’m no expert at anything except slacking

You’re welcome, for the tap tempo pedal input no need to use a relay, just use a NPN transistor as a switch to ground.

Here is a pic of the proto, will probably change a little bit for the production version, but you get the idea.

I’ll make a demo video later this week, got a new Electribe coming so probably sync that to a 606 or 202, maybe some other stuff too.

Maybe i’m confusing myself with another project idea, but don’t you need the relay to isolate connected stuff from the voltages, (if anything goes wrong) i genuinely can’t recall what i had in mind now though tbh, must’ve been more critical ! But cheers for the hints, could be handy option that. Out of curiosity and not wishing to derail the thread, could you have used a 5v feed from the start/stop line (when running) to power the circuit, is that a non-starter were i to come back to this (probs 2016)! Well into that little adafruit doodaa btw looks great for project ideas

I NEED THIS TODAY

Quick update, slightly tweaked up, PCB’s ordered, probably a few weeks time they will be available. I will update the thread with more details and video soon.

how is it going Daren??

Not too much longer now

Done! More details a bit later, but in the meantime here are a couple of phone pics. In a nutshell these will give 4 clocked outputs from the A4/AR dinsync output, or of course any other dinsync gear. 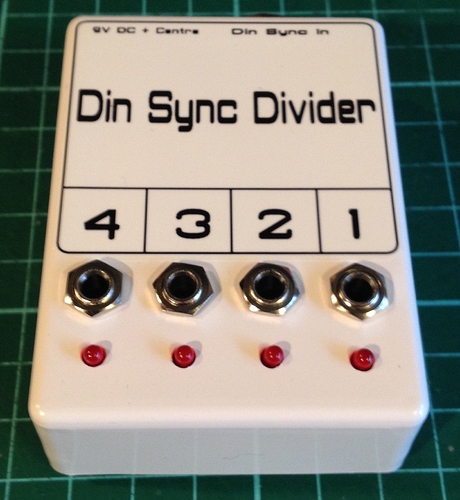 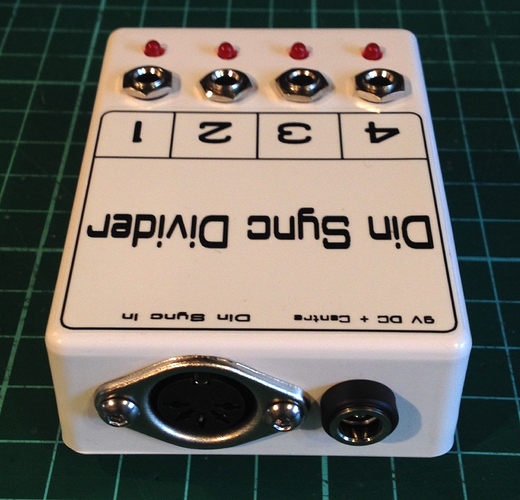 I have a few available now, price is £65 plus shipping, you will need to source your own PSU, a 9v DC 2.1mm tip positive, shipping is charged at cost.

There are 4 outputs, giving 1,2,3 or 4 pulses per quarter note, the outputs are buffered so that they may be spilt upto 4 times without any issues, whenever multiple outputs are high there is no delay between outputs, see the scope shot pic below: 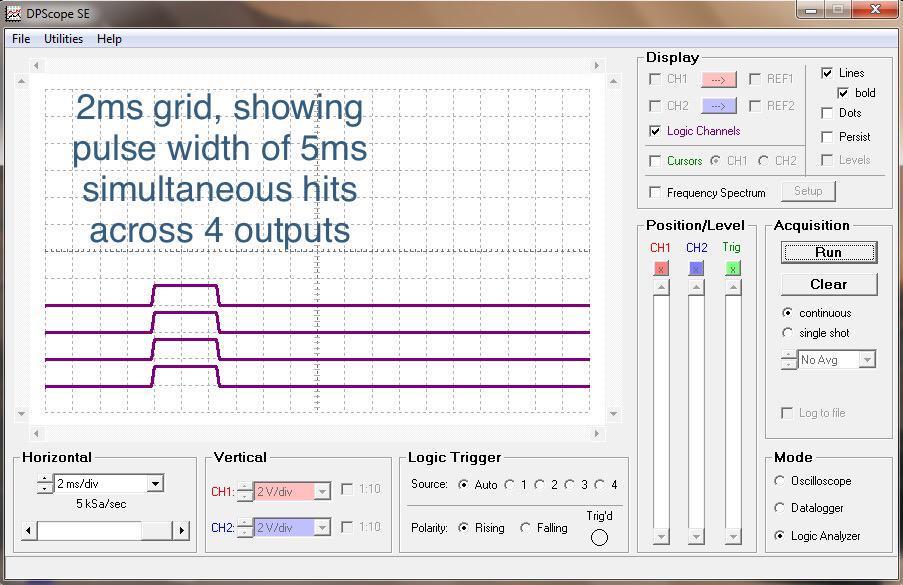 The box will work at any tempo supported by dinsync devices and probably beyond, it can work at 24 or 48ppqn although at 48ppqn as you’d expect the divisions are double the rate.

The outputs are +5v 5ms duration, I have tested them with a wide selection of gear and not had any problems, although I can make no promises that they will be compatible with every piece of gear that accepts positive pulses, I am fairly confident that most modules will work with them.

I think that is everything, if you have any questions just ask here in the thread.

Here is a short video demo, showing it connected to A4, then driving Grendel Grenadier, MS20mini, Dopefer Dark Energy and Bugbrand modular, just showing tempo range and 24/48 performance. Note that when I change from 24 to 48 and back the timing goes offset, the reason for this is because I am not changing it precisely on multiples of 24/48 clock pulses, which would be pretty difficult! The idea is that you set it at either 24 or 48 before starting, then it always stays in step.

just a suggestion, it might be an idea to specify the minimum psu amperage, unless it is relatively low !