I have been having trouble deleting files. If I select all the files in a directory, only some of them will delete. Here’s how I am trying to do it: 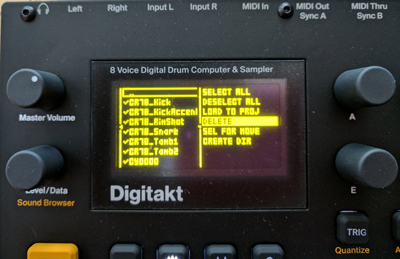 I should have mentioned that there were 30 samples in here before, after the first attempt to delete them, only 22 of the samples erased. These eight will not erase, though.

Seem to remember from the manual there’s a way to ‘write protect’ things. Maybe these samples appear in write protected patterns/projects?

I have attempted to erase all of the projects- there’s only the one I was fooling around with. I don’t think that’s it. Basically I loaded some samples, tried to assign them, it refused to load anything with the word clap in it.

I would do a long description, but I can only post one photo at a time because I am a noob.

The short version, though, is that I loaded 30 samples, assigned them to pads.

I tried to load more, which didn’t seem to work. So I tried to erase all of them, and start over.

No one else is having trouble deleting their samples?

seems really confusing and now I’m getting crashes too…

Yeah, how does this work? I want to delete all factory data, samples, patterns… I’m new to the elektron file system and it’s very confusing.

Yeah, it is. I still haven’t figured out WTF “Drive+” is yet.

Love the machine, but whoever wrote the manual should be punished. Pro tip- manuals are an excellent place to define idiosyncratic nomenclature. In fact, some would say that explaining things clearly would sort of be the point of the manual.

Did anyone else look at this chart and wonder if it contains even the smallest shred of useful information?

Why is there just a box labeled “+Drive” just floating there?

What is its relationship to the other stuff, to which it does not connect in the flow chart?

I could have drawn a box around the word “banana” and it would have been just as informative.

lol. The + drive is the main system memory where everything else is stored. Everything below the project is stored in the RAM. I agree, the chart is weird.

I have so many questions to ask you, but I’ll make a big list and post it at the end of the day. Basically, I’m too confused to know what my question is. Fortunately, I am very, very handsome, so no one expects me to be very smart.

A post was merged into an existing topic: How To: Remove Samples from Project?