Thought to give it its own topic now more units are out in the wild. 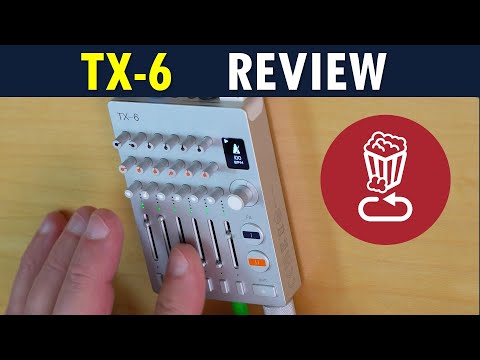 I am guessing the inbuilt synths / drums will prob become programmable in the future e.g drum patterns

If it were possible to load patterns over USB this would make an ideal live companion, can mix over to the onboard patterns between segments of the mix

I can’t imagine dealing with something this small on a dark stage. That seems like a nightmare tbh given how crowded the interface is.

Im not sure where this fits in an how it came about. The OP1 has a built in Mixer so sort of strange to make it.

I’d be extremely interested if it had 4 or 5 rows of pots and enough space between them to put my fingers around one pot. It would need to be double the size it is. Small is cool, but this is too small for me.
Why can’t any company hit that sweet spot between this and a normal-sized Live/DJ mixer?

How do you mean this?
One is a mixer and the other is a workstation .
the op has only 1 stereo input and output
The tx has 6 stereo inputs and three outputs
Apples and oranges ?

I mean the TE line up seens to coexist in its own world. The overlap of Mixers must have been a hard decision.

tx-6 and op-1f are just the first two products in the field line. maybe there are five more products coming to fill all 6 channels …?

Could be. But the Mixer on the OP1 will be wasted if not used.

Its only an internal mixer though isn’t it? Not much use if you have 6 bits of hardware to mix

Yes. But the OP1 is more a standalone device?

Im guessing OP-Z is a no brainer - especially with all the build issues. Would of thought they (TE) would like to stop replacing them lol

Maybe they will release a proper hand held field recorder

Yeah I’m guessing an app is in the works maybe at some stage.

The unit looks pretty damn solid - just the knobs maybe a little bit wobbly as mentioned in the review. Its the one thing I’ve noticed in all the YouTube videos so far

These knobs doesn’t look premium at all, imo.

Glad we have a post for this. With all of the hate from TE out of the way, this has helped me gain a ton of flexibility in a smaller footprint. I sold a large digital mixer that I was using as both an interface and mixer for all my synths and replaced it with a proper interface (the mixer had some latency issues and I finally realized I didn’t need to record all of my inputs simultaneously).

I replaced the mixer with two blueboxes and the tx-6. The Tx is hooked up to my ipad as an interface and takes input from the aux out on my desktop interface and the two BB’s individually. It outputs to a blackbox, to the ipad, and to one of the Blueboxes.

With this setup I can:

It plugs a ton of holes in my routing, especially by adding the portability and letting me route everything essentially between two interfaces for DAW and Ipad that the larger digital mixer just couldn’t do.

On the size: Yeah, it’s real tiny. I’ve been mixing since I was a teenager, and I am not a teenager anymore. The main reason it doesn’t bug me is I’m not mixing down on it. It’s really an input and routing mixer for me, so once I have my gain and levels and eq set for an input I’m just not messing with it a ton. I can imagine if I was fader-riding on it, I’d be annoyed.

On the price: Yup. It’s pricey. I do not believe there is a real alternative to it as a truly stand-alone mixer and interface that is natively ios compatible and portable. It’s also a lot less than the mixer I sold to fund this whole new setup.

On the other stuff: I think the synths are silly. Nobody who needs (relative term) this needs it to do synth duties. I see it as a slightly groovier metronome or I could see using it if I’m out and about to throw down a scratch drum track on the black box to support some synths or rhodes, or piano, or whatever I’m trying to track, but it’s really just a “cute” add on that doesn’t really move the needle.

I hate that it doesn’t have a midi trs. It is the most epic ios interface imaginable, and not being able to hookup legacy midi gear is dumb. It’s more dumb since it supports single-cable no camera connection kit hookups with a usb-c to lightning cable, and that is worthless if you need a physical midi port. Really my biggest gripe with the device. I don’t like relying on BT for midi, but I’ve also run cat-6 throughout my house, so I’m just old-fashioned that way.

Anyhow, happy to talk more about how I’m using it, especially since I’m also an avowed 1010music fan and think most people who don’t need more than 6 stereo / 12 mono inputs are going to be happier with the bluebox.

You don’t use the TX-6 to mix the stuff inside the OP-1. Think of it more like an audio interface than a mixer. This will expand the OP-1 field to having 12 inputs rather than just 1. You won’t have to unplug and plug in stuff on the OP-1 which can turn the Op-1 field into a legitimate DAW replacement if you were looking to use it that way.

The mixer within the OP-1 field is simply to mix the recorded tracks which the TX-6 does nothing with.

Yes compared to the rest of the unit they look a bit less premium. Guess time will tell

Spot on assessment. I needed a mixer but never really wanted to commit to something the size of a model 12. This came along, my knee jerked at how ridiculous the pricing was. I sat around that day thinking of what alternatives there actually was. There aren’t any true alternatives that tick all the boxes and 12 input audio interfaces can get pretty pricey already without the size.

But yeah, people get caught up on the “mixer” side of things and not the fact that it’s an audio interface that can literally fit in your pocket. It’s not necessary but it sounds good and the build feels very good.

Cool - that you got one! I think you have answered quite a lot of my questions but I need to go through and digest your points again later, there was a few things I was not quite sure about after reading the manual.