OTO Boum vs Heat: anyone using both?

Boum is wicked for compression and has nice drive. Wondering if theres a need for a Heat as well. I know it doesnt do compression so wondering if anyone uses both and how they are used together in a mix

I have a Boum, AH1, and AH2, ridiculously enough. The AH1 lives on my OT main out. The AH2 I use in Overbridge mode almost exclusively. The Boum is plugged into my interface i/o.

I don’t know why but I tend to use the Heat more on stereo stemmed busses and mixes and the Boum more on individual instruments or vox or whatever. I’m not sure that I have any good reason for this behavior, it’s just what I tend to do and it sounds great. I should really probably try switching their roles more often though.

how do they sound together? the BOUM sounds amazing on my drums so I’m wondering what the Heat will add to it on the master bus. do they play different enough roles to justify them both?

As I own all three I’m probably not the best role model in purchasing based off necessity.

I really like distortions/saturation’s and I feel the different flavors are enough to warrant having both. I lean toward thinking of the Heat as more of my “hifi” distortion and the Boum more as a vintage one, but I don’t have any evidence to back this up, I think I just brainwashed myself into believing it. Probably because I have the Bim and Bam also and they definitely have a vintage vibe. I’ve never done like an A/B master bus comparison though, nor have I ever ran them in series.

But I have done AH on drums and Boum on a mono synth bass and they sound awesome together in that regard.

can you do a quick A/B/C test off only boum/only heat/both on a mix?
want to see if the boum mix is better with the AH on it

I’ve had AH for a few years and got Boum a few weeks ago. I spent a half hour last night A/Bing both and with AH into Boum, though unfortunately the audio isn’t worth sharing because it gets hard to tell what’s what.

I put AH away once I got Boum because I have never loved it. It’s certainly better (I guess I’ll just say “richer”) than software, but the character isn’t for me. To me, AH is the more lofi distortion, but I’m not sure that distinction means much without some further context. AH alters the midrange and the character completely takes over the source signal, while Boum keeps more of the original vibe. Snares get smeared on AH but remain crisp and punchy on Boum. Different distortion and eq settings on Heat can certainly bring out some crispiness, but the circuit becomes the sound, while on Boum seems to break things up more in a cleaner way. Boum doesn’t seem to affect the midrange as much.

I’ll say for heavier distortion sounds, AH is nicer to me because Boum just keeps going into new levels of harshness as you increase distortion. That Round Fuzz circuit is something special. Since AH is too characterful for me to use on the master bus it’s best suited to mangling instruments or groups. Boum will be on my master bus for life, but is also very useful on instruments and groups. Boum providing the final glue on a mix with AH does sound very nice.

AH is likely the only distortion unit one would need for doing anything from clean boost or subtle saturation, but it especially excels at wilder stuff. Boum is better for making things breathe/pump/providing rich subtle saturation without completely altering the character of your source. There is certainly room for both if you want more color in your setup 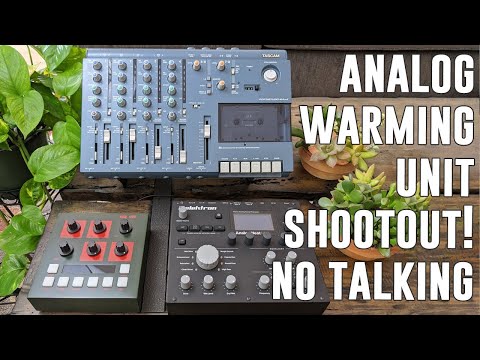 So you’re saying on the master boum is king.

I had that feeling too when I used it - there is no way im not running everything thru this.

I was interested in the Heat as a master effect to glue the mix together, more for the filter/saturation not as a distortion unit. but looks like Boum is better

…the clean boost circuit on the ah gives adds the character of an old console summing glue to anything…and is the only cicuit of that 8, i run a master bus through…
all others i use for incoming recordings…

if u work all digital, both can make a truu difference…

thats what I was thinking of doing:

I would do it the other way around. I love how dynamics push against the subtle distortion on Clean boost or saturation on my heat. And use a bus compressor after the Heat. But it is easy to test both ways.

can you do a quick A/B recording of a mix that goes:

and record with just turning thee Heat on & off?

I dont have the Boum. I have an Warm Audio Bus Comp.

I prefer Boum on the master to AH, but was going to add that others might find the opposite to be true. I suppose it’s all a matter of taste and desired end results.

I’ll try to make a proper comparison recording with what you’re asking for. I did enjoy how Boum’s compressor brought the AH saturation to life. I was mostly comparing AH’s saturation circuit the other night, but as mentioned, clean boost is likely what you’d want to use on a master bus. I’ll compare both circuits when I get to recording something. I feel with clean boost it’s mostly about light transient taming and shaping with the EQ, which could definitely be valuable used before or after Boum.

I was initially disappointed in what Boum did when running some unmastered finished tracks through it, but playing with the source volume and input gain on Boum has made it so I prefer it to my SSL Six G-Bus compressor.

If it’s a matter of AH being used with Boum to make things sound nicer, AH can no doubt achieve that. I was more focused on comparing what they do separately but will try to use them to enhance each other in the next session.

Awesome. Looking forward to hearing the recordings. I love the way the boum sounds and if the Heat can make it sound even better then I’m in.

Had the AH on master for a long time. Eventually, I traded it, because even the Clean Boost added some color to the sound. Lovely as it was, I eventually felt that I didn’t always wanted that character on my tracks, and sold it.

I remember it fondly, though. It was a great piece of kit.

Tried a couple patterns from Digitakt and Digitone. I’ve only heard them through my headphones so the levels could have been matched better.

The first file has 8 bars of each section, 4 bars in the second file.

I tried to mostly go for subtle enhancing with each setting. Boum is on my SSL SiX master insert and AH is on Bus B so they can be completely out of the signal when not used.

Hopefully this helps a little… I haven’t done demo stuff before so the examples could likely be better.