Help me 'edit' my setup?

Ok, so my wife is in an organizing kick, and I thought I’d see if I could trim down (or curate) my collection. I’m thinking of this as an ‘edit.’ Interested in suggestions for insertions or deletions, but any new gear needs to be (basically) paid for by selling old.

What is totally redundant, even if I’m hanging on to it for sentimental reasons? What am I missing that would change my life?

Honestly, even if nobody has any suggestions, it was useful just to catalog what I’ve got. Clearly, I’m not using all of this stuff, and my hoarding instincts have always been hard to resist. But I’m genuinely interested in ways I could reduce my setup to a more efficient lineup. I may not follow any advice offered, but I welcome the opportunity to venture down new rabbit holes…

(edit) Oh, and if anyone wants to propose any trades, I’m interested (but in the US only)

Take a little slice of sticky note and place it on each piece of gear when it is used. Give it a month (or six) and see what doesn’t have a sticker. I’m sure you know what does and does not see regular use but this is a good visual reminder that you are not using something.

Damn, you have a lot lol

I would compare stuff that makes others redundant to the point that you can part with it. Obviously you have some nice unique stuff, but seems like a lot could be redunant to an extent. I usually only keep gear I am using in my current setup.

It depends on your style and recording style, but I’d go with:

Holy crap thats alot
Do you need all those synths if you have a4? Can it mimic the 303 and bass station?

Depends on which Style of music you try to achieve.

Here is my Take, a simple, but powerfull Setup:

Im a slash and burn sort of person. If it were me,
Keep:
Digitone
A4
MPC
Computer
DFAM
TR-8S

Why? Well I reckon my keep list covers everything, probably dont even need the MPC but it made the list out of curiosity. There’s enough scope with the items I listed ‘keep’ to last a lifetime and beyond.

Biggest thing that jumps out to me is you probably don’t need the Minologue if you have a Prologue. And assuming the legacy keyboards are big boys, selling them could free up a lot of space.

In terms of keeping stuff, you definitely want to keep at least one really good full-size keybed. So that’d be the Prologue or one of the legacy boards.

Only If he’s a Keyboard Player. Otherwise…

Depending of your style, I would keep Digitone + Model:Samples or MPC One + DFAM.
And the computer in every cases.

I’ve told this before, but I went from this: 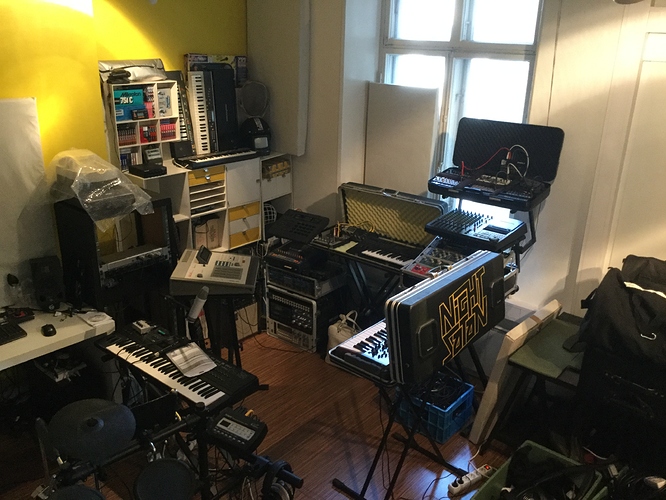 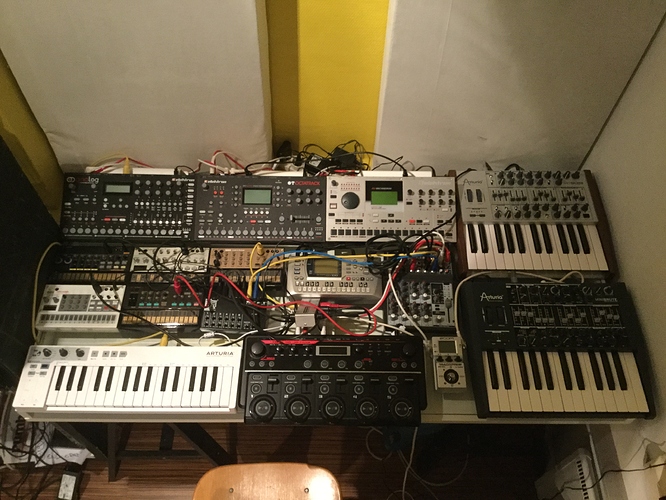 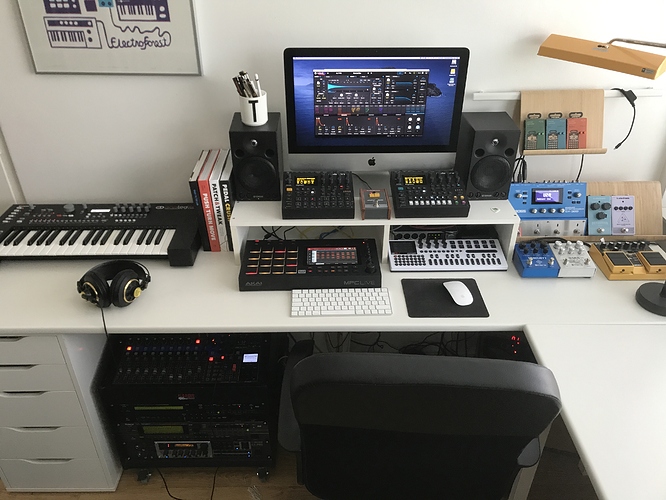 All this happened in the space of maybe 4-5 years. I used to be a gear hoarder with a roomful of synths and vintage stuff. I had everything from Korg Polysix to cheap Casio keyboards and whatnot.

One day I got fed up with the messy setup and held a studio clearance. I invited people over to our studio and sold 42 pieces of equipment for a good price. I left a couple of pieces like the Minibrutes and the Volcas etc, but with the money I made I bought three pieces of gear. A4, OT and MD (second pic). That’s the day I became an Elektronaut. Those three machines gave me much more fun than the 42 pieces I had sold to get them.

Since that I’ve streamlined my setup even more. Nowadays I don’t have to pay studio rent anymore because my whole setup easily fits into my study. I’ve made some painful decisions like letting go of my beloved Yamaha QY-700, but there was no sense in holding onto it when I had the MPC Live already.

I’d say, don’t be afraid to let go. It’ll feel good, believe me. As a general rule the best, most euphoric feelings in my life have been the result of letting go of something. Selling a car I hated owning. Resigning from a job I didn’t enjoy anymore. Letting go of excessive synths and concentrating on a small setup. Everytime I take out the garbage I feel somehow good that those things are out of my life now. It’s funny.

You have some overlap in your huge setup. I’d go the route of deciding which piece is going to be your studio brain, the one you write with? Is it the Pyramid or the MPC One or maybe something else? I often think that I need one of each type of gear. One sampler, one mono analog, one poly analog, one digisynth etc. At most I have two of something, never more. Effects boxes are another thing. They’re my bad habit. I can never have enough guitar pedals etc. But they’re easy to tuck away in a drawer and use just a few at a time.

Good luck slimming down your setup, it’s a fun adventure.

Im a slash and burn sort of person

The true path! I kept OT, AR Mk1, Virus Ti, Tetra, Avalon, Modular.
This gives me every option I want (except maybe dedicated FM - I have a Volca in my cupboard).

So from your list I would write the function/s of each box, and keep the box that is the “best” at each (it’s a little subjective of course). For example I kicked off BS2, covering the analog synth sounds with Tetra, I put away the volca, making do with 2op FM from the Virus etc.

I find the advantage in a clean desk and a coherent workflow and signal path outweighs some limitations in each area. @Wolf-Rami knows…

I often think that I need one of each type of gear. One sampler, one mono analog, one poly analog, one digisynth etc

It really does feel good to let stuff go

I’ll venture that some of what you have feels like a burden. Get rid of that stuff.

Also, I’d consider selling a chunk of the mid-tier ‘it’s alright’ gear to fund something high-end. It looks like you’ve been reaching for a nice polysynth and compromising.

I’m on an organising kick too. I did the epic clearout a few years ago, but I might have to move at the end of the year and it’s true what they say - it really does feel good to let go of stuff.

Good luck, and don’t be afraid to let go. Of course, if you love it, keep it

I know I have to do the same.
Can’t really push myself into it, guess it’s for next year ^^

Now that you have a list, why not rate each instrument, in term of bond to it.
I know I would rate my OT and DN above every other machine, that’s the ones I bring with me when I play outside of my studio.

Pick a number (e.g.) and remove the machines you have less bound with.

That would be the way I would deal with this GAS we have, I guess.

I’d be looking to trade in a lot of those synths for one beast synth. The DN is incredibly powerful, even though I sold mine.

A method could be to create a big excel sheet, layout a table with the machines in lines and the function you want to cover in columns and cross which function each machine covers. It could be Analog, Digital, Monophonic, Polyphonic, Drums, Samples, Midi sequencer, Multiple tracks, playing live, etc
I believe you can come up with a very cool shortlist by doing that.

Personnaly, by checking like that with my own criteria, it would be keep the Digitone, TR-8s and A4mk1 and sell the rest

A method could be to create a big excel sheet, layout a table with the machines in lines and the function you want to cover in columns and cross which function each machine covers.

Exactly what I did!

Helped me to see what I needed, I kept the highest score items on the table

and gosh…u got too many sequencers here in first place…

hologram and zoia are hardwired to ur fx sends on the tascam i hope…which is ur ONLY interface?..hmmm…

u might kik out volca, 303 clone, minlogue and the tr8 to finance other converters…