Your first live electronic music gigs...who, when and where

And loads of others since …

Doug e fresh + The Cookie Crew - 1988 - London Astoria (not strictly an electronic music gig, but they did have synths, samplers and drum machines)

I’d probably call this hip hop rather than electronic, although I did buy ‘the show’ and memorised the whole song

Just interested to know everyones first live electronic music gigs, who you saw, when and where, I

My memory is very hazy, but one of the early ones would have been:
Cabaret Voltaire, Haçienda (Manchester, UK), February 1986

I saw a bunch of shows including Chris & Cosey in Denmark in 1987-88, notably Depeche Mode & Nitzer Ebb at Valbyhallen, Copenhagen, on the “Music for the masses” tour in early 1988.

my bro (Hastis) supported em on their Irish tour.

Hard to say, I didn’t get into electronic music until I was a little bit older, early on I was going to more metal shows, so my first ever was Fear Factory around ‘99, and Gravity Kills and Ministry (two separate shows) in the ‘00s…

But Autechre in Brooklyn in ‘08 is probably my first proper electronic show as far as I’m concerned.

I remember Hastis,
Moby in the Tivoli Dublin 94 was my 1st.

I started going to raves in London 94, but I do not remember much…it was fun and if I remember something I will let you know😅
I do remember The Prodigy show in Glastonbury 96…that was really good

ah yea I think I remember that one. couldn’t get in (I was a very young looking 15 year old

There wasn’t much in the way of electronic music happening in my teenage years here in the US. The first concert I remember seeing wherein the electronic elements made a big impact was The Cars touring either Candy-O or Panorama… would have been 1980, so probably Panorama.

I also saw Skinny Puppy w/Edward Ka-Spel in maybe ‘86 or ‘87. That one was primarily synth/sampler based and had a massive impact on me, especially Mr. Qa’ Sepel’s set.

Very first show was Pink Floyd’s Animals Tour when I was 3 y/o. Does that count? Concert tickets were cheaper than babysitters in 1973…

First concert ticket I ever purchased was Duran Duran in 1986.

First band gig ever played was opening for Front Line Assembly in 1991.

Add N to (X) in 99 when I was 17. They were supporting Supergrass in Wolverhampton. All my mates were going to see Supergrass, but I was only there for Add N to (X). If I remember rightly most of the fairly large crowd couldn’t give two shits about them, except for me and a girl who had clearly had a lot of drugs. I spent the rest of the gig after they finished at the bar drinking and chatting with the dancing girl, who turned out to be far more interesting than Supergrass.
It was a pretty good gig.

Just last year I saw Telefon Tel Aviv, Shigeto, and Lusine for the Ghostly International 20 Year Anniversary in San Franciso. It was sweet.

I prefer seeing rock bands live; I think Tobacco at Mad Planet in Milwaukee, WI was my first electronic show. But it was made particularly awesome by the fact that the drummer and bass player from Black Moth Super Rainbow were touring with Tobacco at the time.

Since then I saw a friend do a modular set at a local club, and FINALLY managed to see my all time favorite band, Stereolab at Turner Hall. I’m gonna count it, they’re like 50% electronic and 100% amazing. 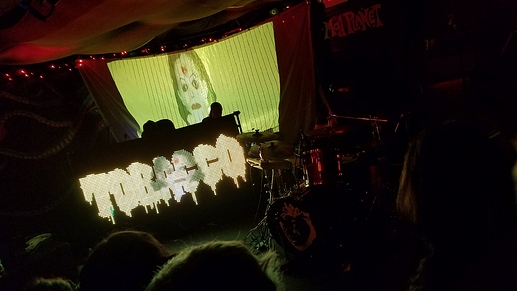 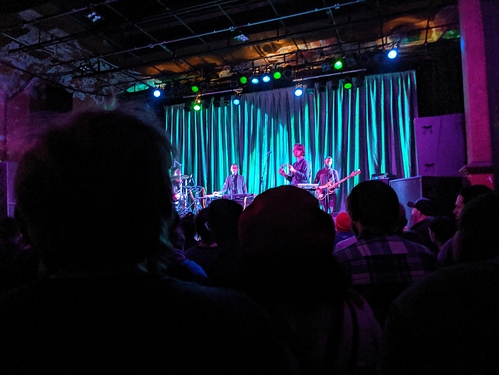 Babyland and Midnight Laserbeam played at gilman alot when i was a yooth, i was really excited to see Babyland’s set up was an old Apple 2 controlling a synth or two and a sampler and then the drummer had a bunch of huge sandbarrels from the side of the freeway that he banged on.