Hello everyone, my first post here. Just ordered Digitone yesterday, and while impatiently waiting for a package, I started to read the PDF manual. Which is very fine, but I noticed some minor mistakes in the text. Or at least I think that these are mistakes. Some of them are just typos. And so I just wanted to share them as a - let’s call it - bug report for some future correction maybe. So here they are:

[8.1] The [TRIG] keys light up to indicate the position of placed trigs and to indicate the selected bank and track pattern /not sure/
[8.3] As a group, the track selection keys ([TRIG] [TRACK] keys) have radio button functionality
[9] A pattern contains up to eight four sounds (one for each synth track)
[9] A pattern also contains all the parameter settings for the eight four MIDI tracks
[10.1.2] A flashing LED indicates the currently active pattern page when a pattern is playing
[10.5] A dot next to the trach track number indicates that the sound is in mono
[11.5.2] Envelope trig sets the trig behavious behaviour of the operator envelops- envelops - The the envelopes can be either triggered or gated
[11.7] The filters BASE and WIDTH parameters defines define the base-width filters frequency range
[11.8.4] Release Time sets the length of the release phase of the filter amp envelope
[13.3.4] (0–198) → (0.00–127.00) /not sure/
[14.2.1] The SOUND BROWSER can also be accessed by pressing [FUNC] + TRACK LEVEL LEVEL/DATA

Thanks for all the great feedback on the Digitone manual. It makes me happy to come across persons who reads the manual as religiously as you do, and then also make the effort to give feedback

To honor this, I have made these corrections (and a few others) and there will be a new version of the manual published today.

hey cmon u know we love you man!

+Drive Sound library has the capacity of 4096 Sounds

Section B.3 (FM PARAMETERS) in the MIDI Implementation part has the incorrect CC’s for the first 3 parameters. The manual says:

They are actually one number lower than what is listed. The correct CC’s are:

I thought I was crazy until I figured out the manual was incorrect… haha!

2048 is the correct number indeed. Thanks for catching that.

Ah yes those CCs have already been changed and are correct in the current manual. If I don’t recall wrongly, there were some other changes to a couple of CCs more. You should download the latest manual from the site just in case.

But thanks for reaching out with your feedback. Its much appreciated!

Was looking at the manual to know if sound setup was saved with sound and came with this: P14, 5.2.3 I think you should add that Sound setup and arp Menu are parts of the sound and save with it.
On the arp menu page 25, 9.5 it is said, which is not the case for sound setup p24, 9.4 (but maybe it’s clear enough that is saved since it’s called sound setup

This is not really a mistake in the manual, merely a small suggestion.

But it would have greatly helped me, save a few hours of confusion, if the MUTE section in the manual would clearly say that PATTERN/GLOBAL MUTE are toggles. Kind of like state management. As the display only shows which state you are in for a few seconds, plenty enough time if you know what you are looking for, relying just on the colour coding of the trig keys takes some getting used to.

I thought the Digitone Latch Fill mode did not work properly until now.
The manual could be more clear about this:

Actually you have do this in the exact right order or it won’t work, and should say:
Press and hold [PAGE] and then press [YES]. Then release [PAGE] before you release [YES] to latch FILL mode. Press [PAGE] again to unlatch FILL mode

agreed that it can be a bit more helpfully [emphasised]

Whilst not in Step record mode … . Press(hold) Fill(Page) Press(hold) Yes Release Fill Release Yes . Now Fill is latched - press Fill again to unlatch . This is poorly described in the comments of the Elektron video just released

With AR it works with FUNC + double press Fill. So that has changed I guess?

So that has changed I guess?

In 2016 the AR was the Mk1, so the hardware has changed by acquiring a dedicated button, but this sequential finger roll-on-roll-off combo still works for AR Mk1

Is this the right thread for manual inconsistencies? I did a search, but it wasn’t clear… I think there’s a longer thread somewhere…

Anyway. Here’s another mention for the manual being wrong about CHNG/CH.LEN.

Pg 45 of the Rytm manual and page (something) of the Syntakt manual both claim that setting CHNG or CH.LEN will affect when a pattern changes to the next pattern in Chain Mode (and manual mode). It works just as described in manual mode, but doesn’t work in Chain Mode. This has been discussed many times in several threads, so I assume the issue has been raised in the manuals threads… but it’s so confusing and annoying, and so suprirrisng that it’s still mis-described in the Syntakt manual, that I feel compelled to write about it and raise a support ticket. In Chain Mode, the LEN/M.LEN parameter controls the change length.

I think it’s a bug, actually… I’m sure Elektron intend for it to work as described (because that would make more sense). However, it’s been a bug across multiple devices, seemingly for multiple OS releases, so I presume there’s significant reason it’s not fixed technically. So the manuals should change. 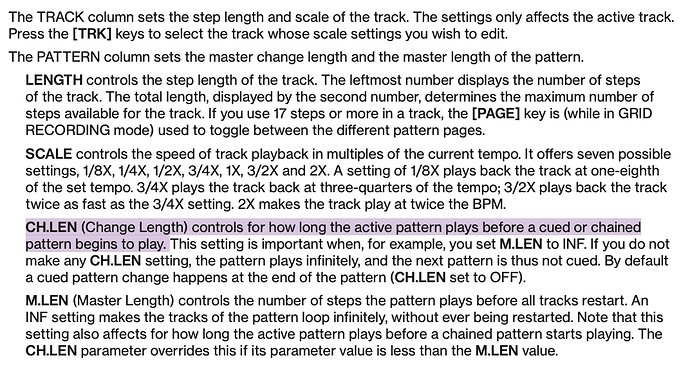 Is this the right thread for manual inconsistencies? I did a search, but it wasn’t clear… I think there’s a longer thread somewhere…

Thank you @DoS.
I’ll close this one so that we preferably use @eangman’s thread:
https://www.elektronauts.com/t/the-elektron-documentation-thread/