I’ve got the AR after Syntakt was released, I didn’t care for the additional synth machines as I have a DN and I really wanna focus on exploring FM and also I really wanted the “flagship” model as I never had one.
I have 0 regrets getting the AR even after all the ST updates, it’s a beast of a machine and I love it, it’s very deep and it’ll take many years for me to master it.
personally I still want a flagship machine to be on par with the digis at least in some basic stuff like BW filters (at least for samples), fine tuning params, input mixer, stuff that is kinda standard in the rest of the machines and once you have it you can’t live without 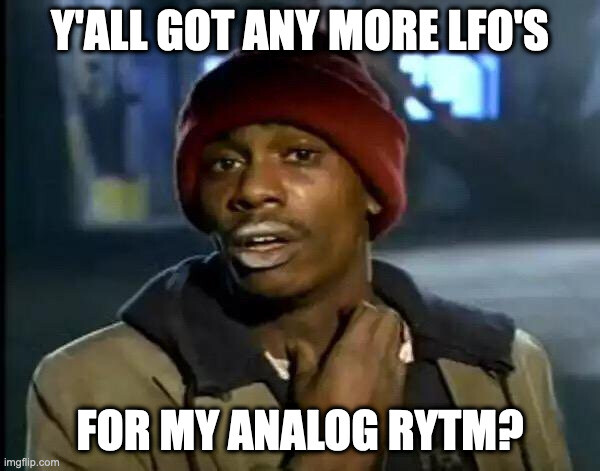 basically it not about money, but about setup size.

Am not a fan of using 2+ elektrons at the same time, I have another gear that perfectly plays with one elektron box, it can make a lot of unique things, that other boxes can’t. Rytm is my favorite instrument, it sounds huge, but the lack of some simple features makes my setup more complicated. For example absence of useful external input.

I understand that elektron wants me to buy Syntakt+Digitakt+Digitone+Octatrack to do all this things))) but of course I prefer one universal box for higher price to combine with my other gear perfectly.

given the information in this video at 3:30, I will be very surprised if an update to Analogs comes out. this is clearly a statement, hope it is only about dismissing Dataline and not about stopping updates 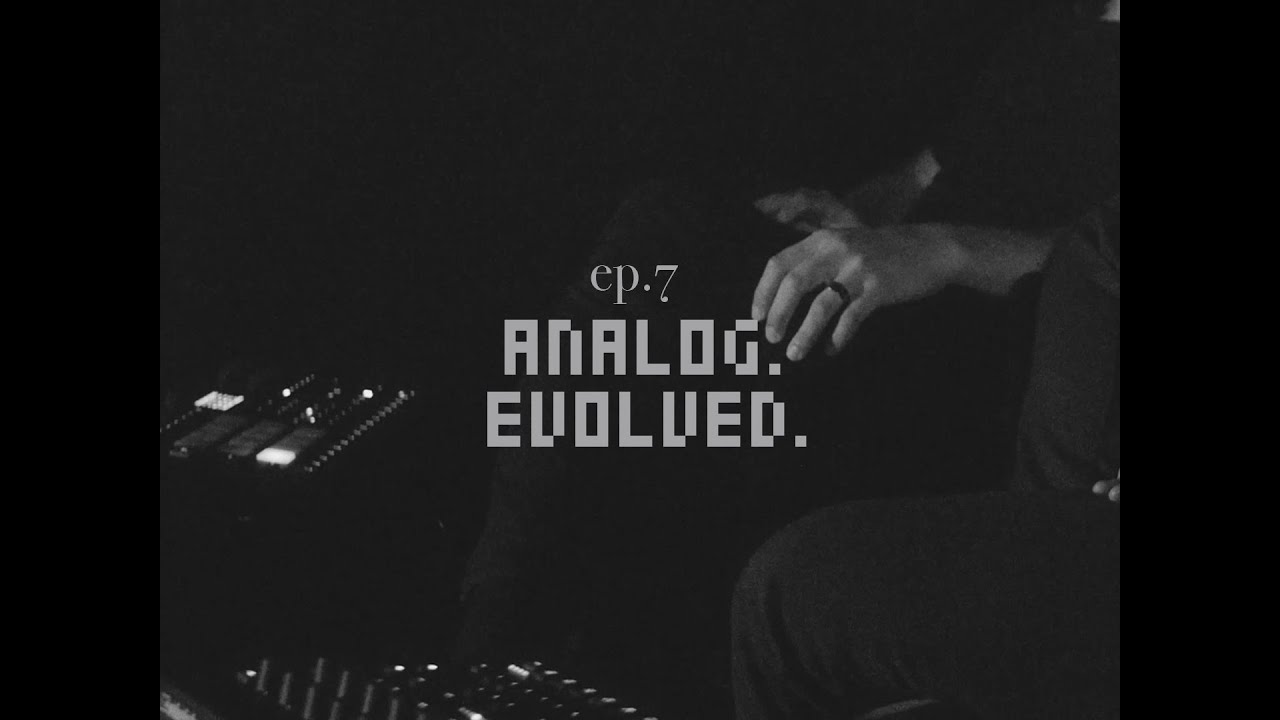 this is clearly a statement

It’s clearly a joke in a bit of promo content. I’m fairly sure there was at least one update following that video.

Does Elektron actually say anywhere the Rytm Mk2 is their flagship product?

As much as I’d love a few nice to haves, I can’t see Elektron bringing the Rytm to meet the features found in their other range.

The additional stuff which would be nice to have, can often be found using other gear using the multiple outputs, which makes sense in its design to me. It’s certainly the main reason i bought one.

Is there another piece of kit that does what it does with that many individual outputs? There wasn’t when i got mine.

I just assumed it was one of the most expensive due to the massive amount of external outputs, overall size and analog circuitry?

I’ve only got the Rytm Mk2, so I’m probably missing something. Be interesting to see a specs list side by side. Might give an indication as to what updates, to realistically expect. The new paint job was a nice one

I don’t think individual outs are so expensive, as its analog outs. Rytm is 1.8x (2.25x right now on sale) price of Syntakt, but obviously internal component price of this unit are not so different. Rytm has +3 toms engines and one more CY voice, also +4 filters, 2 audio convertors chip DAC and ADC (12 in/out total vs one chip in Syntakt), compressor, CV input, more buttons and pads, individual outs and bigger housing. On the other hand Syntakt has 2 CPU and additional fpga to connect them, improved analog engines (more stable + square wave I think), stereo filter on AFX. So It just marketing separation to different sale segments, as Syntakt main board is full of analog components and DAC/ADCs as a Rytm main board, and at the same time very close to DT/DT price range.

We can calculate analog components price impact: DT is $850 now, Syntakt with out sale was $1000, so $150 is difference, for that price we get 4 analog voices and 4 filters, additional ADC/DAC to handle analog voices and FX bus routines, +1 CPU and fpga around it (in DN we get it for free)), analog stereo filter and distortion. I don’t say all this components cost equals this difference, its just impact measure

Rytm is 2.25x price of Syntakt

I guess i meant more market place value at time of release, and now, and maintaining profit margins etc than component to component costing.

Obviously they could make it cheaper or add more value but I suspect based on them not really updating massively since i bought mine, which was years back, i assume their sales are fine? Do they share that publicly?

Interesting though, as if there was ever a time to do updatet, it’s possibly now, although I suspect it’ll stay largely as it is until it’s phased out? Or left with some minimal support?

Some small adjustments could be made to tweak the Rytm, but i assume they will just keep it as is largely, as seem to like stand alone gear that has it’s own sound, more than each thing offering the same or incrementally more based on the price? Or is that true as only own Rytm? I have used the Model: Cycles tho and that thing sounds amazing and totally different. Build quality is pretty cheap tho, but it is cheap so fair enough.

Obviously most of their new kit is budget, lower price etc and amazing kit for that price. Presumably they have found new ways to offer better value at better prices, the older gear less in development, but still there for sale. I mean just based on what there is to see.

It’s a shame so many companies hide what they are developing.

Am I remembering right the price actually went up recently?

The ARmk2 is my favorite machine ever, and I’m saying that after 10+ years of using an old mpc as my single studio gear and knowing it in and out.

The main gripe I have is that some things are possible, but just with a weird workaround. You can finetune any parameter using either the lfo or vel mod, but not by just changing tje parameter itself. You can use the compressor, but not visually see what it does, even after you could before.

It’s mainly those things that I think the AR deserves as an update, because it would give it the power it deserves. All other things would be a nice bonus.

this. some intelligent refinement on standards.

As far as I can tell Elektron has never released updates for every one of their products at the same time.
Yet they DEFINITELY surprise everyone with unexpected updates when they do release stuff.
The Dual VCO comes to mind, conditional trigs on OT, etc.

2 years is not a long time at all

I love making wishlists but I’m with you on this: the Rytm above all could use some accessibility and workflow updates like the ones you mentioned. It’s already really feature packed, and people don’t seem to realize how many more features it has than the Syntakt. If anything, i wish Syntakt had more Rytm features and not the other way around.

That said, i think a 2nd LFO is the a major update the device really “deserves.” Going back and forth from Syntakt I am regularly looking for it to expand the sound design. And having both a sample and synth on each track, it seems kind of a strange omission and discrepancy, compared to 2 LFOs on Syntakt which doesn’t even inherently use layering.

Yeah, a 2nd LFO would feel like a major update for the RYTM.

In photography there is a mantra: “f8 and be there” (a quote attributed to Arthur Fellig)

In short: Doing the creative bit is more important than high performance gear or perfect technique.

We all like updates, extra function and unlimited canvases, but sometimes it’s good to just say OK, what have I got? What could I do? What have others done with less?

Is the Rytm an amazing instrument? Yup.
Could you write a whole album on it? Yup.
Does the existence of other devices reduce the performance it already has? Nope.

I fully agree, but also: I’d like an update as well.

I agree with this more than anything on this entire forum.
It especially applies to GASing and finishing tracks for me personally.
Working on something with blinders on and trying not worrying about what everyone else is doing.

CC control with A4 and Rytm - Elektron please!

I’m guilty of GAS. I’ve been trying to be more considerate of what I could do with what I have right now. Thinking about a gear freeze for 2023.

That said, I would update my gears firmware, and as many have said already, small additions and updates can bring solid QoL benefits. Song Mode, on Digitone, is the best example for me.

But I’m now trying to be more Zen. The gear is how it is. Better to master what it already is than wish it were different.