Wow, just received my OB-6 keyboard last night. What a beautiful sound. Can sound as tough as guts or soo dreamy with everything in between. That filter is the tits. Can’t get my son off it. 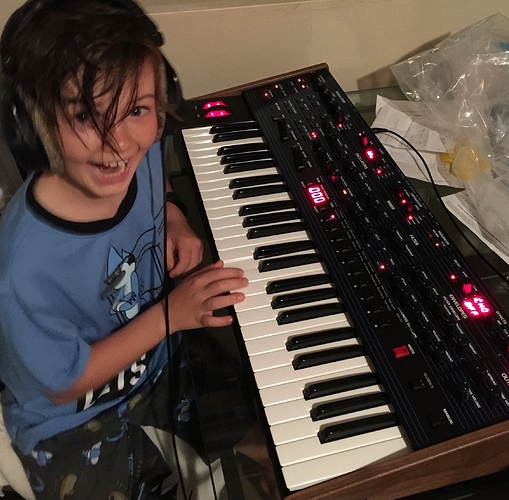 That is one happy kid! I give the same facial expression with my Prophet 6.

Just finished sitting down with my OB and an outboard delay. 3 hours later… I’ve completed my first continuous tantric eargasm

I absolutely LOVE this synth. I’ve owned some really nice toys including the Oberheim TVS…

Nothing… NOTHING comes close. So simple, such glorious sound. Have been multitracking another space lullaby as its been a while.

Hi I agree with most of the above but recently I seen a youtube video that analysed the P6 and OB6 oscillators and there is a real difference in tone and depth, so much that I see them as completely different sound engines now. My personal preference is the OB6 and I’m able to get the Curtis Prophet sound out of the Pro One so currently saving up for the OB6!

Can’t believe it was only 4 months ago but I totally forgot the context of the conversation. Enjoy whatever synth you buy, in good health!

What did you think of the OB 6? I’m interested as it’s another one on the list. I’ve got the Matrix 1000 but architecture wise it’s not really in the same class as the real oberheims with the SEM inspired filter. Fairly sure I’d go for the synth rather than the module.

I think I hang on for a while and seen how progress goes on the UBXa front.

OB-6 is the most organic sounding synth I’ve ever used so far, I’m hoping the Super 6 touches on the same type of organic quality, an aliveness in its sound, I will find out as more demos come. I purchased it to try but I needed a bit more utility in my setup, I’m not super wealthy so I can’t choose to spoil myself and purchase anything I want. Also not into putting a hobby on credit cards if I don’t plan on paying it off the same billing cycle. So, the OB-6 is on the back burner for me. I want the Super 6 more than it just because of the lack of screens and extra voices, also lack of effects is actually a bonus for me since I use pedals… The OB-6’s were definitely adequate but not amazing.

The sweet spot is the entire synth though, if you’re into experimental sounds it isn’t ideal but you can get some gnarly stuff with the x-mod. Bread and butter sounds though wow, no other modern poly touches it, not even the Moog One (which actually a lot of people seem to complain about), nothing except maybe Baloran The River and hopefully the Super 6. Polychain the keyboard OB-6 with the module OB-6? Insanity! If you want experimentation and lots of modulation there’s a chance I’d recommend the Novation Summit coming out, but for me, I think I’d pick the OB-6 every time.

My dream setup would include the OB-6, Super 6, and some sort of MFB synth, probably the Dominion 1. I’m not really into Behringer stuff but that’s just me, I’d rather have nothing and save up than immediate gratification for something I don’t really want.

Cheers for the heads up! Must admit I’ve liked what I’ve heard of the OB but I’ve not played one in the flesh.

The Super 6 sounds awesome on those SB’19 vids too. That could well be a future classic. Just hope it comes to full fruition in the not too distant future.

For me I decided to go modular, the only other synth I have right now is the Digitone… Tons of utility between the OT, DN and Eurorack. If I want to add a SEM filter, I just add a SEM filter, currently I opted for the Roland 505 filter because I fell in love with it. Just resample mono into chords with the OT.

Cool! I’m confused tho… is that a re release? It looks like an old two voice to my eyes? And my German ist kaput…

Edit… from what I can see with a quick google search is he’s a restorer. There’s a page devoted to an osCAR repair/resto.

I wanted to layer several synths for an ambient track, ended just keeping the OB-6: the sound is so sweet, whatever I tweak, it’s pure happiness.
Played with OSC2 XMod on filter, and suddenly saw the interest of having a FENV pot beside. Really love the harmonics it adds.

Such a beautiful sounding synth !

I am on the waitlist for this LFE box. Works on the prophet 6 and the ob-6. I will let you know how it works with my prophet 6 when it arrives in Sprin 2020.

But, I should show some support for the little guys who make the effort to build these things.

I need two of these. One for each day of the week

Got myself one of these now. 30 day trial before I have to decide if it’s a keeper.

So, have you decided yet ?

Not quite😊had it for a few hours only. Sweet hours, tho, for sure😊

I tried one on my way to buy a Prophet Rev2… and it was a huge mistake, I do have the Prophet but the OB6’s sound still haunts me to this day !

Anyway, cheers on the acquisition, have fun !

I’m struggling with reasons to return this one. It’s expensive, but I only have space for one synth and it’s just about what I can afford and within one day, it’s taking me to places where I really want to go.

I think it’s quite different from the Prophet6, actually, but maybe that’s stating the obvious.