The AK/A4 replacing and surpassing a Boss SL-20

I used to have this Boss SL-20 slicer pedal which I loved very dearly. 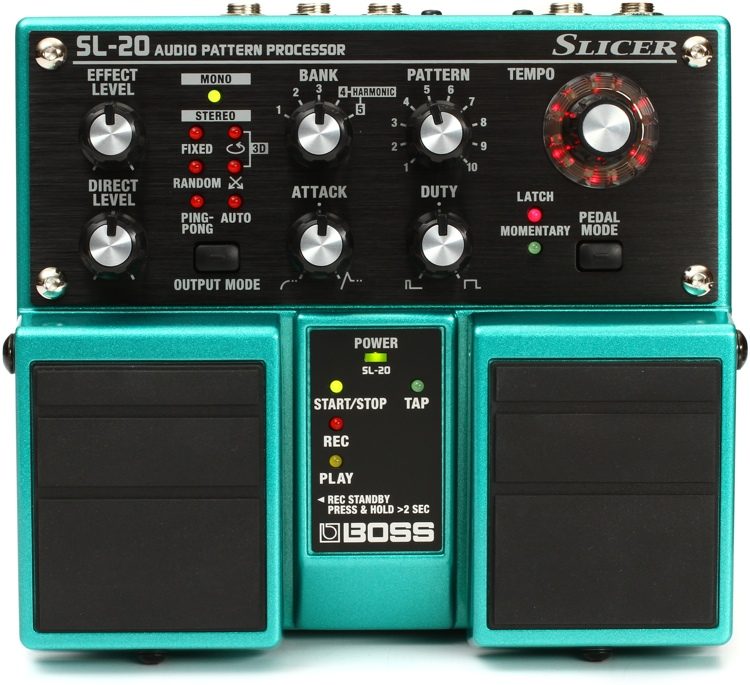 Still, years later, I check the local equivalent of Craig’s List daily (more like hourly) to see if there’s one for sale. I want it back badly. I sold it because I bought the Boss MD-500 which was supposed to have the exact same functionality as the SL-20 but with added user programmable patterns. It was ok, but not on par with the real thing. Ended up trading it for something else.

At the moment I have two different Boss multi-fx that include the famous slicer effect but they’re nowhere near the versatility of the original pedal. Only 20 patterns, and very very limited tweakability.

Today in the midst of watching The Boys on Amazon Prime I was reading some thread on Elektronauts (can’t remember which one) and came to the realization that you can use an external sound source as an oscillator in the AK/A4. I kept on watching The Boys (as it is a damn fine tv show) but the gears started turning in my brain. If I could use another synth as the sound source and only use the sequencer to let sound through periodically on the steps I want I could achieve the slicer effect with a piece of gear I already own.

I had to put The Boys on pause and come test it in actuality. I plugged my iPad and the Polysix app to my Analog Keys and put a chord on hold. Then I initialized a sound, chose In L and In R as the oscillators and programmed a pattern. As I pressed play, the Polysix chord played on every note I had programmed for it to play and I could use the envelopes, filters, noise and effects on it.

Heureka! This is better than the Boss SL-20 I thought to myself in ecstacy! A completely programmable slicer with all kinds of extras.

After a while of toying around I realized that I could copy the instrument to another track and program a different pattern and maybe pan the two tracks left and right to make them distinct from each other. Oh my god, I have four SL-20s in one and it’s been here on my table all along. I really don’t need that pedal for anything anymore. I can stop refreshing the second hand pedal page.

I guess this whole story is old hat for some of you but for me this was a moment of revelation. I rarely think of my three Elektrons as effect boxes even though they excel in that purpose too. I remember trying something similar when I still had the Octatrack but felt that it was too much hassle. With my AK I can just save my 4 channel monster slicer as a kit and load it anytime I feel like it. I can also take all four sliced tracks out individually and further effect them. The only thing missing comparing to the SL-20 are the harmonic patterns, but I can just route my individual outs to my Meris Hedra and that does the job.

I love my Analog Keys for many reasons but tonight there’s a whole new reason to love it.

That’s great. Thanks for the report. Been wanting to input things thru the AK since I got it, but have just ended up working on sound design withe built in Osc’s. This is getting me thinking.

Yeah, I often use my AK for filtering Octatrack drums in stereo. Macros for filters, envelopes, lfos, panning etc.
Sometimes even with neighbour tracks for stacked distortion or the delay as distortion effect (delay time set to 1, delay overdrive up).

The ability to control envelope and lfo retriggering individually per trig allows for some intricate modulation patterns.

And oscillator AM also works with external inputs!

I needd to wrap my head around routing at the mo. I have the Holy Trinity now+a MnM…And they all have inputs that do insane stuff. Mostly, I just run the MnM thru the A4, but I need to come up with a system where I can just switch what goes into what.
Something like the Future Soundsystems MTX8, would be amazing for this, but I’m sure I could do all this with a mixer and a patchbay.

I have everything on the patchbay. Costs a small fortune in cables (if you´re getting some decent cables), but once everything is hooked up, it´s just amazing to work that way!

Same here, everything on patchbay. Makes patching a breeze.

I started thinking about hooking up two different synths to the inputs and effecting two different signals. I’d still have two tracks per synth to effect the signal. Also there’s the possibility of using just two tracks for effecting and playing the synth duophonically on top of that. The AK/A4 architecture is kind of amazing.

I used to do this with my machinedrum before I got the UW, running my iphone to the inputs to fake like it was playing samples. it’s a great trick!

I always wanted one of these pedals, apparently the band HEALTH used them extensively

A4 and AK input OSCs are vastly under utilized.

I especially loved using the A4 as an analog filter bank.
Turn up the filter overdrive on external input oscillators, then use the LFOs in linear FM mode - sequence notes from the arp, or the sequencer to get that filtered distortion to pitch around in a musical way.

Things get real gnarly, real quick. And all you need is a kick, snare, and hat from just about any drum source. For a bigger, wider sound, turn on 2 or 3 voice unison to spread it out.

Kicks turn into disgustingly dirty baselines. Snares turn into bomb explosions. Use the last track for some dark strings. Mix it all against the dry drums in parallel. It’s wild.

…from another happy user, just left breathless and stunned by the everlasting ongoing bunch of surprises waiting for u in these machines…the endless ways of use and abuse of all those hidden sonic tricks wanted to be discovered under their hoods…

the more u zoom in, the bigger gets the sonic universe…
u’ve never seen it all…
keep on plocking everybody…

and my goodness…what a cool track, adamjay…
but hey…fade outs are for loosers…

Ok, you got me interested. Gonna try this out.

Turn up the filter overdrive on external input oscillators, then use the LFOs in linear FM mode

I’ve actually never recorded anything with it, but I’ve probaply spent hours just jamming with OT drums going into overdriven stereo filters biting on the drums with filter fm on my AK.

With filters, env and modulation on macros, I can go on for hours. Such a lovely sound.

Only passive guitar straight in…using Osc2 for AM.

I guess it works like the slicer fx I have on my Boss RC505. Synced to OT midi clock I use it to make hihats with my voice for instance.
Is there a Pattern list for SL20?

There isn’t an official one at least.
A dude has tried to transcribe the patterns here:

Hey All, I'm creating a reference sheet for the slicer. I contacted Boss directly and they don't have one. This is a draft and will eventually be reformatted. I'm submitting this for feedback, corrections whatever. Please chime in if you're...

There’s 50 presets on the SL-20 with 30 of them regular and 20 of them “harmonic patterns” which include some type of pitchshifting/harmonizing.

My original intention with the pedal was to have this fast staccato heavy metal riff type of slicing on my synth so I could just hold some notes down and it would become an instant metal riff, but it never quite worked like that. (I could achieve the same effect nowadays by programming a metal riff on my AK and transposing it with the keyboard etc.) I ended up mostly slicing very mellow 808-State type balearic synth pads with it.