Does anyone know if it’s still possible to buy replacement Octa/A4/RYTM encoder knobs? I notice they are not listed in the accessories section of the shop. I’m looking for quite a number of the grey ones – preferably the ones with the white dot on the top.

You’d probably have to ask support about the possibility of getting those … obviously they’ll carry less of the dotted ones, but I’ve no idea if they’ll be selling them if it’s not for direct replacement, especially if they’re scarce, which i’d hope they weren’t, it may depend on the numbers I suppose … some of them age badly, kinda hoping that years down the line these can be swapped out or sourced from elsewhere

I wonder if they’re bespoke or available elsewhere, I suspect bespoke even though they seem so normal

Keep in mind that not all dots are aligned on an encoder shaft the same, the D underneath the knob can be out by 90/180deg etc … there’s also the depth to consider too, take the Blofeld, those encoder caps look similar, but the length of encoder-shaft and the overall height differ enough that you couldn’t get away with mounting Elektron ones on the Waldorf without chopping the shaft a bit, now the corollary will be that the other way may mean that the shaft is not proud enough, so the cap will scuff the facia

simplest thing is to try one out first on the application you have in mind, then try support (who’ll be busy returning from their break btw)

I recently bought an OT knob replacement set direct from Elektron. Submit a ticket and they will set up the order for you. I would guess they don’t sell them bulk though, especially considering the redesigns

Thanks for the information – I’ll speak to support and look into the alternatives.

FYI, I was looking to replace a few worn knobs on my dark trinity, but was also considering the practicalities of replacing the knobs on the new MX12 and PC12 DT-centric MIDI controllers from Faderfox. You’re looking at obtaining 96 knobs in total (24 for the MX12 and 72 for the PC12) to do that though!

Did Elektron design and/or manufacture the encoder knobs themselves? With the lack of availability I assume so?

I honestly don’t remember, but I don’t recall it being unreasonable

WOW. So many knobs…no not those. This isn’t the Tories website.

Think they also have cross fader caps for the OT?

I have some yellow staining on the encoders of my recent purchases. Both the A4 and the AR are from the same seller and I don’t know if the guy was jamming with his curry dinner or what but its pissing me off.

How do you clean the encoders to get stains out without damaging them. Should I use a wet cloth here?

I prefer curry over nicotine.

I would pop them off and try a damp cloth. If you can’t get the stain off elektron will sell things like encoders, buttons, etc. People who have ordered and left feedback about it around here say they are pretty cheap to order.

Yeah I think I bought new encoders in the past via a support ticket? Worth doing that, the knobs do get gross over time.

i’m not sure you can - it’s just an age thing with these no matter how hygenic your environment - the most used are the most tarnished - it happens, but replacements are out there - perhaps to clean them (try one) in warm soapy water nowhere near the machine and dry of course, see if there’s any difference, i don’t think you’ll have any luck but i wouldn’t point the finger at the last owner - no issues with the black ones on the grey boxes fwiw but they’d be tricky to work with on a black box imho

Edit: tried them and they are a bit narrow (only 10mm wide). There is a 15mm version though that is closer in size to original knobs. 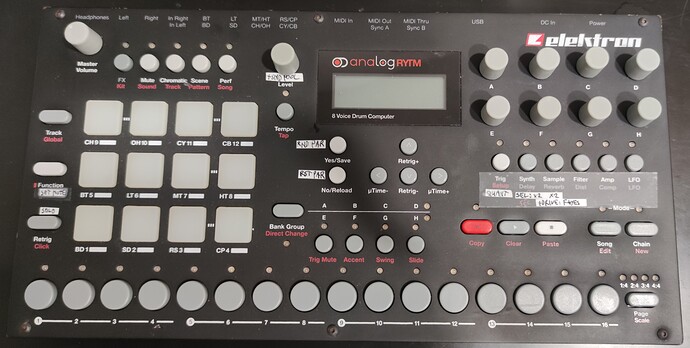 IMG_20211201_1912414906×2476 1.57 MB
On the subject of yellowed, grimy Elektron Analog Rytm / Analog Four / Octatrack knobs: I tried cleaning them with Chemipro Oxi
cleaner (from my beer brewing days :)) and it works great! No trace of yellow left. Should be safe for the materials as it is intended for cleaning and disinfection of plastic brewing equipment.

Mix the knobs in a glass of hot water and a spoonful of granules for a few minutes.

Do you guys know if the knob caps of the a4 mk1 are compatible with the mk2?

I have the mk1 and mine are getting yellowish, and I think I would like to have them replaced for black ones to get a cleaner look.