i have the Space Modulator too, but i’m still hungry to check out the ADA as i’ve been gassing for the original pedal for quite sometime now. i feel it sounds quite different, perhaps nearer to the Clusterflux or Morely flange sound imo

I need to give it another try. Probably used zero flanging ever.

so far on these sales, i’ve picked up lion, byome, and triad. i haven’t got too far into lion or triad yet, but byome is amazing. i expect the others to be just as good as they’re soooo deep. i’ve got specops sitting in my cart now, going to be tough not to get that one too for $10.

also bough oberhausen yesterday. i’m amazed at how good it sounds. in an hour or two, i put together a few evolving pads that i can use as the foundations for new tracks. very analog, the filters are really smooth, and the mid/side processing options look really interesting. feel like i stole it for $15.

I take 2 plugins from this sales: Brainworx masterdesk and Dangerous BAX EQ.
I tried to remaster one of my DT beat with this 2 plugins on the main mix. It’s day and night.
BAX EQ add so depth and warm, punchy kick and sweet hi hats. Masterdesk is the mastering for the dummies. Just turn gently the knobs and enjoy the sound. The dynamic range VU Meter help a lot to stay in the green range when you have shit ears on shit headphone.
Really, thoses 2 plugins for 80$…

and now i have to check out this master desk, thanks haha.

Almost everything in the store is tagged as “mastering” so I’m not sure what to look for.

Mastering plugins can be used for mixing too. Usually a mastering processor ($8000 piece of hardware) can only be used on busses or the master because you literally only have one. Not the case with plugins.

My Plugin-alliance take so far:

Subfilter was a suprise to me. I just randomly loaded it and instantly found it useful for dialing in the low end.

Stereomaker & bx_control_v2 are both super useful for stereo widening especially with the built in correlation meters.

Elysia Alphia Compressor sounded very good as a buss compressor but I only tried it on one mix buss.

Speaking of great sounding compressors:
The Shadow Hills one sounds amazing on a drum buss (master too).
Opto followed by discrete is just a very good idea. Kind of how you use multiple compressors to get each compressor to not have to work as hard but this is built into one device.

bx_masterdesk is really good for a great sound quick master to listen to in the car. With a good enough mix I think you could get away with only this on the master channel for mastering (and a limiter/maximizer). The foundation combined with the tone controls can really clean up the lower half of a mix.

AMEK EQ 200
Whoa! Maybe I’m crazy but my short experimenting with it was pretty phenomenal. I could boost like crazy and it sounded very natural, not squeezed, or nasal, not sure I’ve heard an EQ that really stood out because of it’s transparency. I’ll definitely be experimenting with this one some more. I hope it sees a bigger discount sometime in the future because it’s quite pricey.

I worked out getting MIDI to trigger it and that was all I needed to pull the trigger after playing with the demo for a while.

Definitely digging all the great mixing tools so far. Loving all of the M-S capabilities in a lot of the plugins.

Went ahead and got Zip on your recommendation. Very interesting & unique plugin indeed, you guys make great stuff!

Also thoroughly enjoying your wonderful way of sharing your enthusiasm for your products with such authenticity and honesty.

Keep keeping on and thank you for your work!

yep alpha is great! Have to check the Shadow Hills too.

My “Go To” Plug in for “mastered for cars” is just the bx_limiter. Turn off the xl saturation (even at 0% it colors slightly). The masterdesk already cuts the sub-bottom end. So I felt it´s not good for reference listening in the car. But otherwise … for dj mixes etc. I think masterdesk is good.

I thought the bx_limiter sounded very good too, haven’t used it enough yet though.

I decided to do the Mix and Master bundle because it would give me time to check out all of the plugins I want and decide on them for the next sale.

Super good marketing and deal on their part. I get to try all of the plugins for a year and then use more than I spent when I’m ready at the next sale. It’s way better than buying things after a short demo and then being left with plugins you thought were cool but never use again.

Because their synth selection is so little, and I’m not really into guitar FX (right now anyway, I do own a nice guitar and bass but rarely play them).

With one day left on the sale I revisited BX Oberhausen. 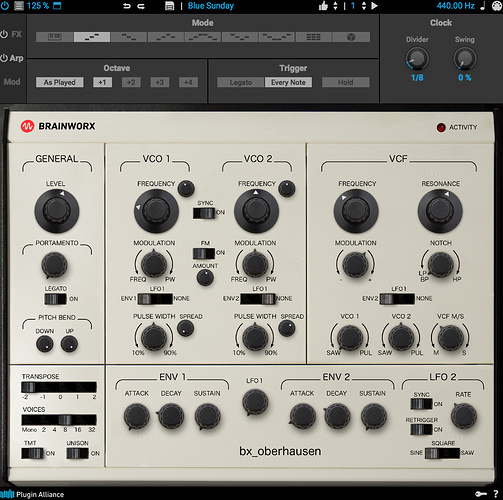 It’s simplicity threw me off at first but I actually really like the sound of it now that I’ve revisited it for a while.

The spread on the individual oscillators is very useful as is the M/S on the filter. I just did a quick demo before and I wasn’t in the mood I guess.

While it’s simple, I figured it would be a good use of the $20 off deal and grab it for $19 in case I want that sound.
I’ve never owned an SEM but this sounds familiar to me.

ended up buying the bx_digital plugin because why not. I’m sure it will come in handy.

oh cmon dirk, give me a break!!! I just used my 20$ surprise voucher to wake up to my monthly 25$ voucher. THIS WILL NEVER EEEEEEEEND!!! AAAAAAAAAAAHHHHHH!!!

Plugin Alliance will take ALL of our money!!!

Their voucher game is next level, I feel like I’m dealing with a company that truly loves me and showers me in unexpected unconditional love every time they send one of those vouchers out lol.

I’m looking at the ACME XLA-3 now. Don’t really need it, lol, but it seems to sound really good for vocals etc and at $15 after voucher, it’s hard to argue against it…aaaarrrgghhh

I feel like I’m dealing with a company that cynically inflates their prices to create a sense of premium value so that when the sale comes around, people feel like they miss out doubly unless they start buying stuff.

I only have two of their plugins and they seem very nice so I don’t have any complaints about the quality of their plugins. I just don’t like manipulative business models that prey on bugs in the human brain.

yeah, that’s what I meant, obviously joking as their sales prices are so frequent that they can be considered the status quo rather than the exception. That said, I’m not sure if they are “preying” on us. Most plugins would be decent value in comparison still, so the prices they go for after discounts are extremely fair and good value for the customer.

I’d say micro transactions in games or dynamic pricing where demand and supply is not transparent or loot box models are preying models.

this one is just designed to make you feel good about your purchase and that way get you to spend manageable amounts repeatedly/frequently.

Considering the value most seem to get out of the plugins they buy with them, I’d say that’s fair enough.

A lot of plugin developers seem to follow that strategy, Waves is another example.

Extremely steep prices for undiscounted products and deep sales every now and then.

It came so far that as a (hobbyist-)customer I would never even think of buying an undiscounted plugin (from those companies) because I probably have to wait just a month or so until I can get an insane -80% discount for the same product.

So the real price of theses software is far lower than what it is when no sales.

The consumer psychology is very much part of the game for sure. But they were hardly the first. I didn’t owe anything from them until a few weeks ago. I Never undertsood the voucher thing that others seemed to love to game on kvr, etc. Furthermore I didn’t like their integrated downloader (all au’s also show up in Live under Plugin-Alliance and not the plugin maker name). However now that I’m into it I can appreciate it for what it is. They give me a little push to buy something and I disgustingly sit in my chair scanning, demo’ing and thinking - playing out the only sort of hunt my modern lifestyle offers. Is it all bad in the end? Perhaps, but at this point I’m just riding the wave of destruction to the end. It’s too far late in the game for me to make a difference.

Who on earth buys non discounted plugins?
I see the discounted prices as the normal prices. With the vouchers I think they are pretty cheap for the quality you get.

Can somebody say something about the focusrite channel strip from pa? Best compared to SSL (I have N). What does one get from it that makes it special?