Paraphonic synths are polyphonic by definition

Last night I couldn’t sleep for some time, and while I should have read instead of facing a screen to get a chance to fall asleep again, I wasted some time on the internet, terrible mistake.
But I came across a post by Marc Doty / Automatic Gainsay where he explains that paraphonic synths are by definition polyphonic. 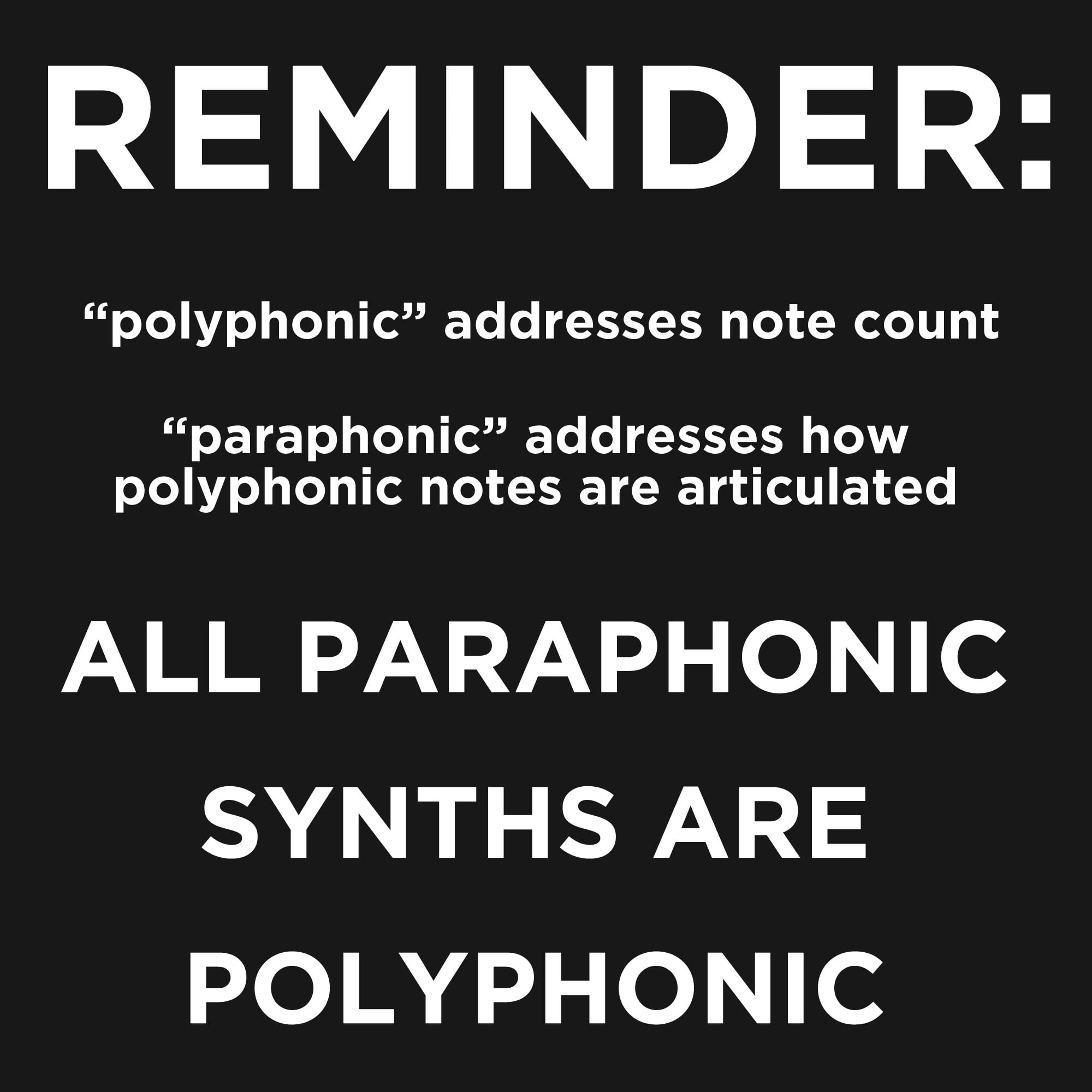 With the recent Behringer release, the confusion has arisen again. "Paraphonic" is our term to describe a certain configuration for articulating a polyphonic synthesizer... one where all of the...

So far it had been crystal clear in my mind for a long time that polyphonic meant (and only meant) one fully articulated voice per note, thus excluding paraphony.
Reading the discussion, Doty’s arguments eventually convinced me and I now understand the definitions:

So, well, thank you Behringer for bringing this debate on the table and offer me the chance to refine my education. Poly-D is both a paraphonic synth and a polyphonic synth, OK with that.
But “voices” being notes with full articulation, it’s just definitely not a 4-voice polyphonic synth. 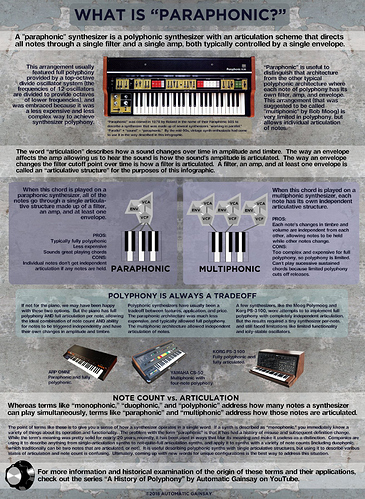 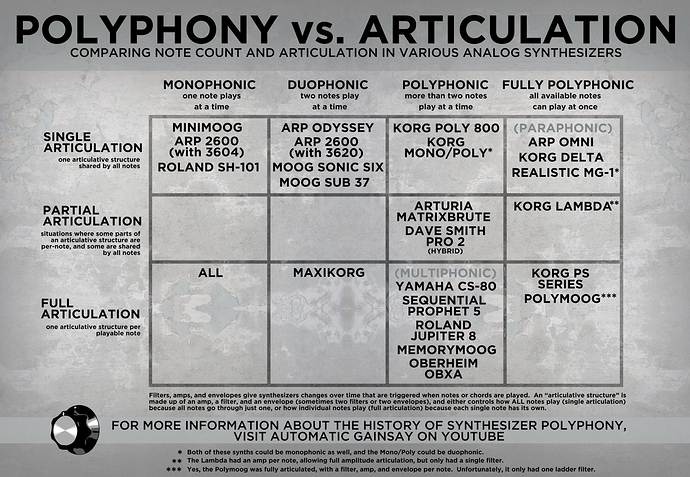 But “voices” being notes with full articulation, it’s just definitely not a 4-voice polyphonic synth.

I get that paraphony is not originally a term to describe voice architecture in a synth, but for how long have we been using this concept of monophonic/paraphonic/polyphonic synths now?

Pre-empting the inevitable debate that follows every mention of Behringer, I think we can all agree that we live in such a wonderful time that the difference between para and polyphonic synths is what keeps us up at night.

Yeah, I think I should get back to bed

Share away @LyingDalai, I’ve literally nothing else to think about today and this is way more interesting than children’s television.

So I have a polyphonic Subsequent37

Paraphonic synths are polyphonic by definition

so the idea being that polyphonic voices ran together thru the same part of the architecture - usually the filter.

but for sure its a ‘weak definition’ - unless we have individual outputs, at some point all voices come together - it might be at the filter stage, or an fx stage , or the final outputs…
so arguably everything is paraphonic.

also, why is the filter stage considered important?
really this very much a subtractive synthesis viewpoint that its considered a core part of the voice.

then we move to ‘expressive’ instruments, for those to be fully articulated, we might need other parts of the voice to be also separated e.g. a wave folder?
(so should everything become paraphonic, if other elements are shared?)

like most things, these terms are useful ‘shorthand’ if you know what they mean,
question is, now we have so many other synthesis options available is it really useful to keep a term that’s quite specific to one voice architecture?
perhaps given subtractive synthesis is still a very large part of the segment, and most will argue the filter is a very important part of the ‘synthesiser sound’.

Thowing in some thoughts from a classical musician:

In an orchestra instruments can be polyphonic, paraphonic or monophonic. These terms are rarely used in this context but if it helps to sort it out:

Monophonic: all wind instruments. You can play only one note at a time on a french horn, trumpet, basson, flute etc.

Paraphonic: some instruments allow to play different notes at at time. The violin has four strings, but usually they play only one note at a time. If multiple notes are played (which happens often in orchestral music) the tone can´t be articulated independently. You have only one bow to pull over the strings.
The Accordeon is another example for a typical paraphonic instrument. The articulation is set by the player who moves the wind bag, all played notes behave the same way.

Truly polyphnonic instruments are the grand piano or all mallett instruments (vibraphone, marimbaphone). A church organ looks polyphonic at the first glance but is also paraphonic if you take a closer look. Notes can´t be articulated at all as you don´t have envelopes or velocity to use some synth-terms.

Voice articulation is not just filter related: it’s also the amp, the filter keyboard tracking, the envelopes that are in the path that offers the capacity on a x-voice poly to play new notes with each their own voice while holding a chord.
The fact that all voices get mixed at some point doesn’t make a fully articulated polyphonic synth a paraphonic one.

Unless I misunderstood what you’ve just said

OK. Consider my noodle baked, because, take for example my prophet 6, which is a true polyphonic synth. But, if I apply the LFO, which is global to the filter/vca/vcf, does it become a paraphonic synth?

Damn, I thought I had it.

That’s a question for Marc Doty I guess.

But I would say that as you can play any note independently of the others, it’s not paraphonic in his book, but a trully polyphonic synth.

Actually, one LFO per voice wouldn’t be really musical in most cases, I guess. Unless you want to play FM. The more we talk about this, the more I feel like A4 is a true achievement, btw

I think the generally accepted definition of polyphony is each voice having its own oscillator, filter, VCA and envelope, LFO isn’t really part of the equation as in most cases you’d want the modulation to be uniform across all the notes, in most cases I think.

Poly-D is a Polyphonic Synth but not Multitimbral.

It uses more Voices (Polyphony) but they‘re not Independent from each other (multitimbral).

All Paraphonic comments should be deleted by now.

lol, nothing about this is correct. Troll?

lol.
it’s just an opportunity for you to spread your word.
Poly just means “more” even if it’s just the Oscillators.

Poly just means “more” even if it’s just the Oscillators.

Actually it’s means you can play more than one note at a time: a monophonic synth can have 3 oscillators, while a poly (paraphonic or not) let you play at least two different notes (not only as a chord).
That’s the comprehension I have, at least.

If i have two synths, one is polyphonic and the other is behringer polyphonic D, can i call the first one paraphonic? is that ok with marc dot?

Not to forget about pragmaphonic which uses whatever signal path is at hand to get to a good end result.