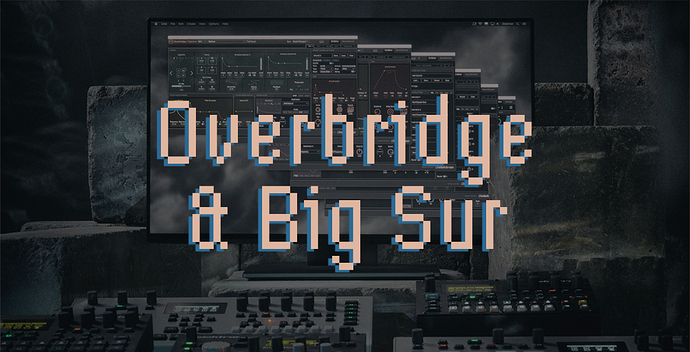 Ahead of a potential release, we wanted to pass on the message that Overbridge is not currently compatible with the upcoming macOS version, Big Sur (version 11.0).

We are working on a solution, so stay tuned to our channels for more information.

This is unfortunate! Really sorry for you guys… Must be really tough to do this tedious work and when that‘s done Apple‘s next big change in code is already in the pipeline.

Don’t worry too much, we’re pretty confident in our progress so far.

On my iMac the last i can install is catalina, on my ipad i cant go more than ios12 same on my iphone…

So apple want me to replace 3 devices to go further with them (compatibility and things i want to keep running). I choose to get back more elektron stuff instead or refreshing computers devices. Well … done.

For the first time if i replace something, it will be second hand for sure

Ahead of a potential release

Here’s everyone’s daily reminder that if you take producing on a DAW seriously, you are used to running an older OS for up to a year or three. Please, folks - stop upgrading on x.x.0 or even x.x.2 releases. Give it a bit. Turn off your auto updates.

Good to know! thanks for the warning. My decision to update to Big Sur just went from “No” to “Hell No”

really? I rather ditch Overbridge in favor of that OS upgrade.

To each his own. I need Overbridge in order to have the separate digitone & digitakt tracks come up as individual tracks in Ableton for editing & mixing - a huge advantage that sets these boxes apart from their peers. Not to mention the fact that it enables you to put the Analog Heat on anything you want, not just what is going through the inputs (software synths, live drums etc.)

Yep, that is what I will be missing as well. But I want those new OS features. Don‘t know why.

With USB set to Overbridge, Big Sur does not detect the Digitone or AH, when set to USB Audio the OS detects the devices. I wonder if Apple will allow the type of audio routing required by Overbridge? Is there a working beta of Overbridge at this time? Don’t use Overbridge but I would like to in the future, hopefully it will work.

Just a reminder! Overbridge will not be supporting Mac OS Big Sur 11 on its launch tomorrow, November 12. Stay tuned for more info!

Just Apple being Apple. “Hey remember that thing that used to work perfectly? We made it so it’s not compatible anymore. Want to receive video texts from your Android friends? No. Remember headphone jacks? Lol. BTW we got rid of USB ports too. That’ll be $8,000”

I can’t wait until they get rid of charging cables on their devices and say it’s society’s fault for not having Apple brand wireless charging docks everywhere.

The 12 series phones are still lightening, they just include lightning to usb-c cables in the box now.

oh dang I didn’t know that. anyway yeah this bigSur stuff shouldn’t be surpirsing or should we say SURprising. since they’re adding all that M1 compatibility. seems like it’ll be a rough one for intel users. 10.13.6 is working fine for me

Worth a thread in Other Gear, to log stuff which doesn’t work on Big Sur? I’ve done some testing myself…

This is due to the new security layers to load 3rd party kexts?

Apple announced and documented this a very long time ago before the first beta. And beta releases have been out for a long time too. I had assumed Elektron would’ve at least have a beta version by the time the final Big Sur would be released. Maybe only internally this time? Hope an update drops soon.

Overbridge itself was delayed for a very long time. I had to wait more than a year before I could use what was printed on the box the day I bought it. Overbridge may been a bridge too far.

There will be another macOS release in a year. I fear at some point there simply won’t be any updates anymore and we need to stick to older operating systems. Does anyone know how long Elektron plans to support Overbridge?