Took me ages to work out what was going on here as it’s a bit obscure. I’m hoping someone has bashed their head against this longer than me and come up with a decent workaround.

If you trigger a sample with it’s loop mode set to On, and change Bank, the looping sample ignores the new Part and responds to the crossfader as though you were still on the previous Bank. Re-assigning scenes has no effect so it’s like the sample remembers which 2 scenes were selected before the Bank/Part change. Any manual changes to the track parameters behave as expected.

but in that scenario you can just trig the track to remind it that it should have changed Part, but in this case I can’t trig the track without killing the looping sample. Anyone got a clever workaround for this? Basically I’d like to leave a loop running from the previous track and have it respond to the currently active scenes.

Record it into new part?

That’s definitely a possible workaround but I’m hoping there’s a way to make the Track respond to the currently active Part (similar to the Pickup track bug linked above, but for static/flex)

What happens if you have a trigless trig on the start of the new pattern?

Yes. Part changes require a trig to be effective, and it’s per track IIRC.

I got excited reading this as i thought for sure that’s the answer, but sadly doesn’t work!

Thanks I think that sums it up well. I guess I can understand why they made it behave like this, to prevent audio glitches when you jump to a new Part with completely different settings. Still it would be nice to be able to choose that behaviour.

This way you have the ability to let samples fade out, let them continue to loop, let fx tails ring out etc. so it’s quite nice for transitions.

Could you set the track with the Start Silent option on?

Start Silent completely kills the looping sample, but I was trying to get it to respond to the Scenes of the new Part while still looping

Weird. I would definitely call this a feature and not a bug but it would be good to have a way around it if the user so chooses. The only solution I found when I quickly looked at this was to manually reload the part, but this is not possible to do immediately as you switch patterns.

Thanks! This is exactly what I was looking for, and allows me to keep the sample looping while playing with Scenes on the new Part. I’m just using this to transition between songs so it’s actually not a bad workflow to do a quick Part reload anyway to make sure the song is initialised

If the loop can be synced to pattern length I’d simply retrigger it, instead of looping it.

It’s possible to change scenes with the Arranger, but in your case it would be scenes from previous part…

I usually have trigs on steps or I intentionally want to transition material from the previous part, so it never was an issue for me, but reloading the part sounds like a pretty straight forward thing. One quick button combo, done!

Also gotta do some tests later, it seems like it would be possible to choose scenes basically on a per track basis (on tracks not yet trigged = scenes apply from previous part and on tracks that have been trigged = scenes from the current part apply). This would open up some possibilities. 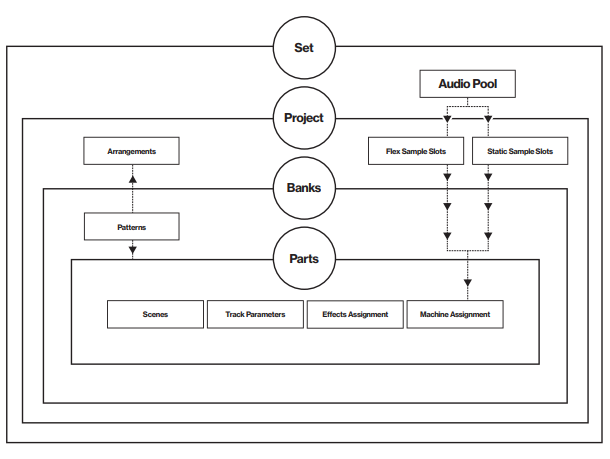 Considering the hierarchy shown in the manual, this behaviour does seem a little confusing. In the diagram, track settings and scenes are contained within parts which is usually a good way to think about it. But we see from this example that parts are in principle a thing that each track can access individually.

seems like it would be possible to choose scenes basically on a per track basis (on tracks not yet trigged = scenes apply from previous part and on tracks that have been trigged = scenes from the current part apply). This would open up some possibilities

Interesting for sure, although not sure my brain can handle the extra complexity just yet!

Also doing some testing it seems like the old Part (e.g. on a Track which hasn’t been retrigged yet) doesn’t respond to Scene changes at all, so for that Track you’re basically locked into whatever 2 were selected before you changed Part. Still could be useful somehow!