Eyes poh. I have 11 ultimate. I wanna use everything inside the suite but, listen… you can spend $1000 on an xps and a 2tb ssd and have only the dll’s on your comp drive but the libraries are huge.

Alongside waves plug’s and the fabfilter mastering suite let alone their $1000 bundle. There are no limits to what you can create.

Groove boxes? You got a high dollar synth, a drum machine and a sampler for breaks… you still need a multitracker and raaax of signal processors. Did i meantion fx?

SSL mixdesk. Try programming melodies from wav into midi or vst by ear.

Start from scratch and work your way up. Can’t go down or you got nothin to leave behind.

Will Komplete 13 updates be 50% off this coming Black Friday?

Or because its just came out they will wait for sales next year?

Most likely next year. They’ll have a sale of sorts but I’d be amazed if Komplete featured in it in any way

Will Komplete 13 updates be 50% off this coming Black Friday?

Or because its just came out they will wait for sales next year?

From what I’ve heard there have been rare occasions where it has been, but almost always it’s in the summer.

has anyone tried upgrading komplete 12 to a different 12 level from ni’s site?

i tried checking my 12 ultimate price in hopes 13 will cost less when i upgrade later on but it seems ni ditched all the 12 upgrades.

Yea I think once 13 is announced, they just kill any updates to v12 of any level.

That said, maybe check how the prices at www.BestService.com match up for upgrades to 13.
I got my last upgrade there and saved a lot of money (can’t remember how much, $80-$100?)
I only had to wait a day for them to email me my upgrade serial #. Worth the wait for the savings. 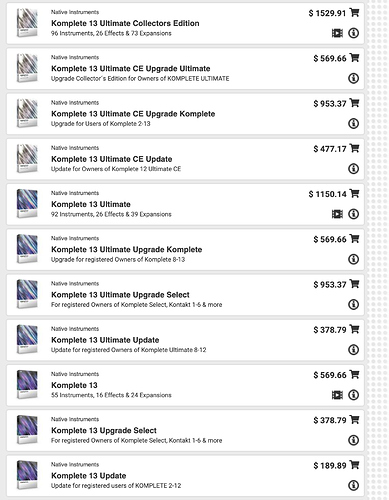 Alternatively, check KVR Buy/Sell forum for K12 Ultimate upgrade. You might find one for a fair price there.

download, but not instant. They usually take about a day to get you your serial #.

I see that Guitar rig 6 now has the vintage compressors and reverb classics included. Are these the same quality as the individual plugins? Interestingly, Komplete 13 standard does not come with those as individual plugins but GR 6 is included and so you do actually get a version of them…

From the promotional video I’ve seen, it seems that the version of those plugins incorporated in GR6 may have a little less tweaking options. But they have only shown the plugins not expanded so it’s anyone’s guess…

What would have been cooler is that GR6 worked as a VST host. Could have been neat to use a Valhalla delay somewhere in the FX chain. (You can still do it with multiple instances (GR > VST > GR) but it’s less handy and doesn’t work outside the DAW)

Either way the effects in GR 5 are good enough to use on their own right. So the new ones seem cool! I am looking forward to trying GR 6.

when is the best time to upgrade? I can’t keep track of their sale periods

…oooooo…just to keep the balance here…

i hate ni products with passion.

just two weeks ago, i met one of their developers…
and told him so again, right in his face…right away…
left him pretty unimpressed as pretty unsurprised…
no big news to him…still friends, no matter what…

and to be fair…big part of the reason is, i’d get lost right away and dragged off my path with aaaaaaaaallll this way too much, way too many fancy, endless presetlists…
loosing any sort of KONTAKTKOMPLETElyyyyyyy…

Hey, so how much cheaper is the summer sale compared to an upgrade from komplete 12? I’ve never done the update, as 12 was the first time I bought komplete. Is the upgrade path a good price or will it be cheaper in the summer?

About half the price, at least it was in the summer sales of the last years.

Generally speaking, the NI tend to have two sales a year - usually a ‘Summer of Sound’ and then your usual Black Friday stuff. The summer sale tends to be best and you’ll get an upgrade for half price. I don’t think K13 will be included in any sales they have this autumn - I’d imagine that would be primarily for sound packs and single instruments.

As always with NI, it’s always best to count up how many things there are in each update that you’re interested in from the comparison charts on the website to see if it make financial sense for your particular tastes/preferences. If you can hold out for the next iteration then you’ll generally get a better deal of ‘things you’ll use’ for how much you pay. Especially if you wait for the summer after the version is anounced.

For example, I was on K10 and in September I order the K12 Upgrade for 50% of from a reseller who confirmed that at the start of October they would automatically add a K13 Upgrade to Native Access account. That was a manual process but by the 2nd or 3rd I was up and running with it all. Fantastic deal for everything that I got.

I guess I will wait a few months then.