I own a DT. What should be my next elektron machine?

thanks for your answers, I think I am going to go for a Digitone next. Sounds like the sensible thing to do.

Digitone is a sweet box. I enjoyed it more than the analog four. I think you’re doing the right thing.

Digitone is in my opinion the most fun (I have OT, DT, and DN).

you’re kinda in the middle like me, so maybe could i suggest a keystep, octatrack, and then add a DN/op-z/op-1/microfreak or something fun and sound-sourcey.

run the keystep into octa, then out to volca, DT, etc. you’ll sample and re-sample and be able to sequence notes and CC’s and every machine connected with octa.

life hack, but you can leave the DAW out of the midi chain except for clock/transport to a DAW, which then have tell keystep the tempo and VIOLA it will play arps from keystep without fucking with octa’s clock!

essentially, this is how i work. i don’t want DAW involved except grabbing songs or loops from hardware.

hi Jonsimon. I already have a keystep and definitely am going to use it in my setup. Just didn’t mention it here because it is “just” a controller

I think that for the moment I would keep the DT as the master, sending midi to:
1.volca
2.sound-sourcey synth (for the moment novation circuit, hopefully in the future the DN) and
3.keystep (for the clock, which allows me to use the arp; I haven’t had any problems with it!

Now I usually have everything sent to my xenyx mixer, but after getting a DN would like to use it as an FXs machine too, so I might be sending signal from mixer to there and then back or something like that. but that is another story.

I love A4 mk1 as my second box, you really can find them cheap and I like how it offers up a bit more variety with its layered approach to the sequencer and the instant pattern changes. Helps things feel a bit less ridged imo. There is a bit more learning with the saving type stuff but it is not so bad.

i went with DN and i’m very happy with it! dopest drums available rn imo!

Hello, Since I own both an Analog four and a Digitone I thought I would chime in.

The Analog four is a fun machine that sounds great, the 4 voice poly may be a bit limiting, but since you are going to pair it with i Digitakt I don’t think it’s going to be a problem.

I have owned my Digitone since February and even though I have had a lot of fun with it, my experience is not as good as with the A4 I am sad to say. My Digitone has displayed some unwanted behaviors and bugs. (even in the latest update 1.31) Such as the unit freezing, saved patterns that disappears, arpegiattor changing length by itself, overbridge disconnecting etc. I have been able to replicate some of the bugs I have found on other Digtiones, and read that others have machines that display the same type of behavior. Here is one of the latest treads here on elektronauts; Worse than heroin and a Mystifying Digitone crash

Because so many are recommending Digitone here it makes me think that maybe it’s my unit that is faulty. But Since I know other machines that display the same behavior it seems to be fairly common, so I wanted to make you aware of the problems that some have before making a decision.

Besides the bugs, Digitone is a fun machine that sounds good, but I would definitely choose the Analog four atleast until another bugfix uppdate.

Depending on what you want to do the Digitone goes with it like bread and butter. They are great fun and super versatile together, one of the best minimalistic setups you could get at the moment imo

I have all of the current Elektron units apart from the Models.

If I had just a Digitakt and wanted one unit to expand upon it, I would go for a good multi-timbal desktop synth, that would give the biggest bang for the buck as the next purchase IMO. You have the Elektron seq’ing already, so you don’t need that aspect of the Digitone… focus your money on the sounds over the seq.

I do really like the Digitone, that’s been my most recent purchase and the final piece in my Elektron collection… it was the final one because I didn’t think it would be for me, but I was wrong, I really like it, way more than I’d expected to. I think it’s my 2nd favourite Elektron device, Analog Rytm mk2 is first, Digitone 2nd (A4mk2 is 3rd, OT and DT tied 4th for me).
So I’d agree in adding the DN if it’s a specific Elektron unit you want.

Digitone Keys. I had both the DN and the Keys and the keys is worth the step up. If not the keys, then the DN. Coming from the DT you will find your way around it with ease and the combo is super deep

I recommend the DN then eventually the OT,
it covers everything DT for drums OT for samples DN for synth 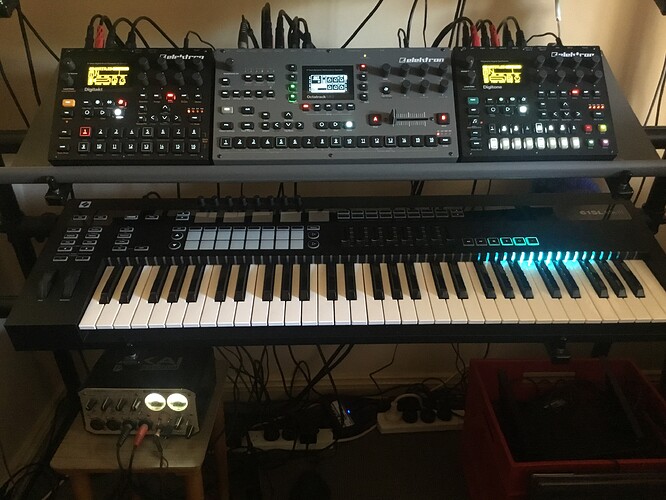 Give your iPad a go. Perfect sidekick to DT (and vice versa)

Interesting.
But which synth would you have recommended if I’d go for the sound instead of the Elektron sequencer?
Also, sounds strange because I feel that what you recommend in the first part of your message is not what it seems you followed, according with the second part of your message?
Anyways, I also wanted to tell you, 'nauts, that I already purchased a used DN. I know. It didn’t take long for me to decide. But we’ll, I can see how it works and could always change my mind, sell it and buy something else later. Looking forward for my new gear to come. And thanks everybody for your insights

Interesting.
But which synth would you have recommended if I’d go for the sound instead of the Elektron sequencer?
Also, sounds strange because I feel that what you recommend in the first part of your message is not what it seems you followed, according with the second part of your message?

Second part of my suggestion was based on you wanting an Elektron unit specifically.

In terms of the synth, I don’t have one that fits what I said because I had a GAS onslaught and bought a bunch of mono-timbal synths! But, the synth that seems to fit the bill is the Waldorf Blofeld.

However, if you’ve got yourself a DN already, don’t worry, it is fantastic and sounds superb. I’d definitely add a sound packs that you can get from the Elektron site, the Haunted Hearts pack from Jogging House has been my personal favourite and let me better understand the way the DN synth engines work.
I use that one and the 2 rtFM packs all the time.

It depends. What are your goals with your Setup?

I think you’re better off NOT getting an Elektron box, but instead getting something like the MC-101 for that Digitakt.

The MC-101 now has patter chaining, aka song mode, something that the DT needs but will never have. You will be able to control the DT using the MC, so you’ll be getting good results fast.

You’d be sacrificing 1 of the 4 tracks on the MC of course, but you’d still have 3 tracks of musical tones that can be used immediately. You won’t need to do lots of synthesizing to find the right sound - you’ll be making beats right away, and feeding them through the DT and recording them using Overbridge.

The MC is very useful - my favorite feature on it was its sequencer (obviously) and it’s quantize percentage. No more static beats!

Remember this: Elektrons strategy is to leave out or exchange/change certain features so we buy them all eventually.

Maybe a blofeld or some of the polyphonic roland boutique stuff?

Seems like the blofeld fills all the gaps you’re missing anyways. But seems you defo need some polyphony which is where elektron stuff seems to be lacking. Yes digitone have 8-note but it’s surprising how limitting that can be when you really want to stack some chords and have them ring out.

If you ask me, yes. Marketing department is always vicious. They only want to maximize profit

and music market is tiny compared to other markets. This here is called “Diversification” (leave a few features out, pull some in).