Just run past the guards. Having Solaire isn’t crucial. Farming and upgrading your weapon is probably gonna be a big help.

A Little off topic, but have any one you played Nioh/Nioh2?

Ive been a soulborne nerd a while, but Nioh kinda killed them for me. 4 times the move sets due to the three stances. Makes the combat super deep, but definitely can’t compete with the writing and overall mood, crazy level design of the FROMSOFT Games

Some time I was thinking of such a topic, but was not sure it is relevant for Elektronauts. Magic!

My story with FromSoft:

Result: started playing DS3 in the end of 2019 and spent about half a year until beaten the last boss.
Now - third playthrough of BloodBourne (for which I bought used PS4Pro and this is the only game on it I play regularly).
Very curious of Elden Ring, but I need some free time this year to write music.

I played to about halfway through the first one, the combat is fantastic but I wasn’t super keen on what was built around it. The general repetition and loot spam made it feel too much of a grind for me.

Really wish I could do a boss rush of it without all the other stuff you do inbetween!

I had fun with the first one but I was actually put off by the complexity of the stance system.

I think Souls are probably the best to me still just because of the amount of player choice when it came to how you want to build your character and play the game. Sekiro is probably my second favorite, some really good different abilities you get that mix stuff up. Puppeteer ninjutsu was really amazing for turning the tides of some really tough battles. Hope elden ring has the sort of build depth found in the dark souls games.

I realise at some point, I have to engage in a From game.

And I’m scared it’ll scar me for life.

You’re in for a treat when you do.

Ive waited 3 years for this game. I barely play video games at all anymore, but I preordered this and bought a Series X just so I can spend hours of free time on this bad boy.

I love From software. They never let me down on their releases.

Bloodborne was my intro about a year ago, finally finished the game last month with such an unmatched feeling of accomplishment.

I love H.P. Lovecraft stories, so naturally I was enthralled with the art style and enimies influenced by the cosmic horror.

Now i’m into DS 3 and researching the lore as I go, they really transport you into these worlds in a convincing and brutal way!

I take this back: bad idea for me. Now I want to play everything theyve ever done.

I definitely wouldn’t recommend playing Bloodborne via any sort of streaming service. Even in the best case scenario (PS4 Pro/PS5) it suffers from frame-pacing issues so feels quite jerky, plus it’s capped at 30fps so isn’t massively responsive to start with. Adding extra latency and instability on top from streaming wouldn’t make for a great experience IMO.

It didn’t receive any actual updates for PS4 Pro or PS5 by the way, they just manage to hold the 30fps more consistently. It’s not a night and day difference with base PS4 by any means so picking one of those up on the cheap even just to then sell on after playing the game would be the way I’d go.

It’s probably worth waiting a bit on Elden Ring, there might be some optimisation after launch. As mentioned before, getting things running well isn’t really their strong suit but there have been examples of improvements, like the Bloodborne loading times which were horrendous when it was first released.

That’s worth a thought.

I think for now I’ll give Dark Souls another go. If I can’t get on with that, what hope do I have for the others?

Haha, yeah some of the other games might do certain things better (I prefer the atmosphere in PS3 Demon’s, the setting of Bloodborne etc.) but I think Dark Souls is probably the best all-rounder to begin with for most people. It still has the best interconnected world and some of the most iconic bosses.

Plus, there’s been a gradual increase in difficulty across all the releases from Demon’s through to Sekiro (Elden Ring seems like it might buck that trend) so Dark Souls is at the easier end of things, though with a couple of famous difficulty spikes that can cause trouble on the first go around.

I think the best advice I can give to anyone starting out is to approach them from the point of view of learning, rather than ‘progressing’ in the usual videogame sense. If you die but you learned something for next time, you didn’t lose - you won! That learning might not even be game-related, it can be about your own ways of dealing with impatience or frustration or stress. A lot of what they do is cleverly designed to prey upon those sorts of emotions and allow you to overcome them. Like, it feels very harsh when you die and lose souls but when you really look at it you’ve generally lost very little in terms of time and after you’ve done an area once and know the layout it becomes exponentially easier to do it again. Even if you don’t make it back to your bloodstain, souls are very easy to safely farm if required and eventually you realise that levelling up once or twice is rarely going to be the difference between success and failure at any given point.

Something like Sonic the Hedgehog on the Mega Drive doesn’t feel unapproachable for most people but the punishment for failure is actually far greater - if you get a game over at the end of the game you’re restarting the entire thing and that’s a few hours of progress gone. The perception of their games as difficult and stressful is often down to smoke, mirrors and how good they are at making things seem like life and death, such as music only really kicking in during boss fights.

It sounds absurd, but I think these are games that offer genuine opportunities for self-improvement. They can be very Zen if you get into them. And also pretty funny once you start laughing at the stupid ways you got yourself killed rather than finding it frustrating.

(Sorry, I can wax lyrical forever about these games)

approach them from the point of view of learning

This is it for me, tbh. I feel I need to completely alter how I approach games (engage, smash some buttons, move on). This requires a kind of, as you say, Zen-like patience that I need to muster from somewhere that I don’t posses normally. That’s why I always claim I’ll play them when I retire. But, man, these worlds (Bloodborne esp) and fights I see in clips just keep me wanting to try again and again.

Thanks for your enthusiasm. I’ll ponder playing Dark Souls again with your words in mind.

Also keep in mind that while the games themselves are hard, or can be perceived as hard, all of them apart from Sekiro have built in ways to make them easier and more approachable to gamers like me, who are not exactly the best.
Most of them have some builds that will make the game easier, warrior with magic spells (I don’t remember the name of the class) in Demon’s Souls or Pyromancer in Dark Souls, make it easier in the earlier parts of the game; grinding is not exciting but is an option that will make a difference, especially when you grind to level up gear; there are lots of overpowered early game weapons, looking at you drake sword in Demon’s Souls.
And multiplayer helps a lot.

I was happy getting Plat on R6 and Golf Club 2k21. Dark Souls is nuts!

Just checked the list of PS Now games and here it is: 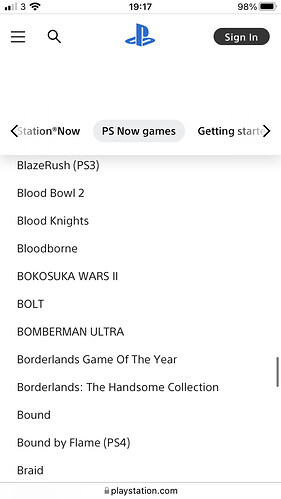