Some have asked me which my favorite (non-Elektron) synthesizer is, but I thought it was more fun to ask everyone (well, almost) at Elektron. So here you go!

Do keep in mind that we like to kid around a lot, so don’t take some of the more, uh, colorful answers too seriously.

But, but… My favorite really is the Machinedrum… Uhh, I once made a tone generator out of a DC motor, does that count? It sounded pretty cool. 30 minutes pass Actually - SP1200!

I have a piano. shrugs

Oberheim/DSI OB-6, such a fat polysynth. It’s gotta be something polyphonic. And the OB-6 sounds really good.

MS-20 of course [EBM fan right here] … Emulator 3 is the best spec-wise though.

Hmm! It has to be something polyphonic… I’ve had so many synthesizers, I need a list or something. Continues to ramble about all the synthesizers he’s owned for at least 20 minutes … I really liked my Juno 106, I would buy one again. But it’s not my favorite. [Ok, Erik…]

Ensoniq ESQ-1. The first ‘real’ synth I ever got. I knew Skinny Puppy had used it on my then favorite record VIVIsectVI, which influenced the purchase a lot. I also thought it sounded really good and was fun to program, and the built-in sequencer was pretty good.

My best tool is Ableton Operator, but it’s not very exciting. NI Razor is very exciting, I like that a lot, so many wacky and amazing sounds! I love the MC-202 and its quirky sequencer. I love all the Bugbrand devices, especially the DRM1. Nord Drum 2 is very clever. OP1, if only for the GUI. And out of nostalgia, the wave channel on Nintendo Game Boy. I usually prefer stuff that has a specific concept and way of doing things rather than modularity/open structure. That and FM synths.

Ouf, I hate synths. snickers Do drum machines count? Does Octatrack count? No? Damn. I don’t like anything else.

Hmm… Out of nostalgia… Or no, can I say software? Then Omnisphere. It’s boring but, damn, I’ve used that for everything. [What about the nostaliga] Korg Triton! Classic.

My Glamour Box from Skychord is my go to synth. Best little gizmo. It can do so many weird, uhh, the knobs are impossible to understand and it’s really nice. Anyone can have fun with it, but for me it’s a great instrument that I always use in my live sets.

Casio SK-1… Maybe it’s too lame? I really like it anyhow.

DX7, just because it sounds great … It’s not fun to program. Oh, I really liked that Cs1x they made, the blue one. Oh and this very strange tabletop module, Darkstar… Super strange and somewhat bad, but pretty unique.

Korg M1 - my dad had one in his home studio, equipped with a- then- very futuristic Atari for sequencing stuff. I think there still exists some embarrassing recordings of young me trying to sing over some of his slick west coast tracks.

Hmm, always hard to come to one single synth, but … The Korg Mono/Poly has always worked for me, for a lot of different things. It sounds really good and is fun to use. Can do everything from really lush sounds to biting stuff.

What a hard question! I can’t say Analog Rytm? Ok. Hmm. For me, a great memory is my sister’s old brown cheap organ that made some kind of FM piano sound, and the old Casio keyboards. Oh! I really love Theremins. It’s like clay, but with sound.

Can’t say Digitone?! Let me think… I would say, Bastl Microgranny and Novation Bass Station 2 are the ones I like. OP1 also! And the Bastl Softpop - so much wtf going on in there that I love it! But… Out of all this, I have to say OP1. Cause I can make full tracks on it… I even made an album just on that! [https://dataline.bandcamp.com/album/mistakes]

Emulator 2. Me and my bandmates were in New York and found this odd second hand place for instruments. We waded through loads of gear and ultimately found the Emulator 2. Our synth guy was enamoured by it, and when the seller told us that it was recently used on Peter Gabriel’s Sledgehammer tour it was no question about it. After getting it home to Sweden(!), we realized that the floppies that it came with had all of Peter Gabriel’s signature sounds! Unfortunately, it was stolen from our studio two weeks later."

https://youtu.be/xJaZ4zNaZkM … I’ll give you a real answer later.
[later] MPC4000. It’s the first real non-computer thing that you could make almost everything on.

Juno-60 … If I may be that boring. It’s a bit like picking the Volvo 240 as your favorite car, but it always works - it’s a big sweet spot and fits well in any production. Oh, the Make Noise 0-Coast is also a big favorite of mine, the semi modularity makes it very special.

Hmm, I am admittedly a bit new to actually playing synths, but I have a deep love for the sounds of the 80’s, so I have to go with the DX7.

My first synth was the Supernova from Novation, and I loved it… But, for me the DX7 made the sounds that I enjoyed the most, the deep club bass hits and such. Back in the day, I used the Nord Lead 2 alot in productions. Access Virus TI2 is also just an all round great synth! Can I say software? Oh, then U-he Diva for sure!

Haha! I forgot to write that we weren’t allowed to pick any of our own.

So i hope the result would differ!?

Yay. Finally somebody else that likes the nord drum 2. <3 Best drum synth ever. Wish it would be more hands on and would have an elektron sequencer built in

Thanks for doing this AMA

Yay. Finally somebody else that likes the nord drum 2. <3 Best drum synth ever. Wish it would be more hands on and would have an elektron sequencer built in

Wow, yeah. I still have nightmares of that Pure Data patch. More digital cables than you would ever believe.

ND2 is underrated for sure. It’s great not only as a drum synth!

Here is my Bugbrand modular and 303’s 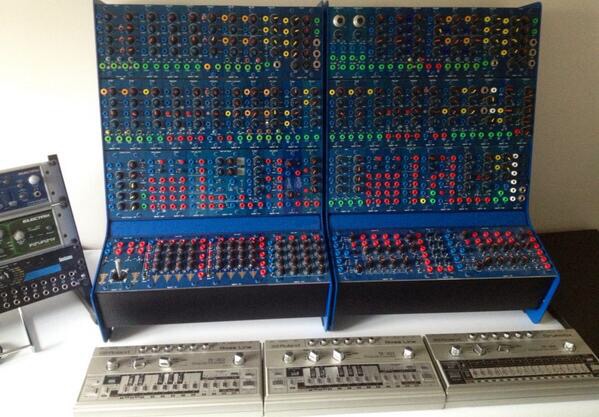 That’s like saying, what’s your favorite ice cream? But you can’t pick chocolate or vanilla!

I love my ND2, it can be readily sequenced, processed and controlled from the OT or MnM though with the correct CC’s, so the best of both worlds !

I don’t think I’d ever equate Elektron products with either chocolate or vanilla.

What’s your favorite ice cream? But you can’t pick Mustard or Avocado!

You, sir, are a braver man than I!

Nice to see the Razor mentions. The cheapest synth I’ve ever bought and probably the most fun. I just wish I didn’t need to use a computer to play it…

nice selection. so few ladies in your team tho

Hey now, let’s not assume that is limited by hiring practices.