I had an idea for this round that might put some people a little out of their comfort zones, after some discussion with @blaize it might be too frustrating

“I’m in a transitional period, so I don’t wanna kill you, I wanna help you” so let’s keep things simple. Goodfella’s was my first battle and the last round brought the heat. I’ve really enjoyed digging into the old movies as sample sources, let’s keep that going.

Last month was the 30th anniversary of reservoir dogs. Quentin Tarantino is very specific about the music used in his films, it is specifically chosen and he regards music to be as important as the script. There is a good variety to choose from here, curious to see what you all do with it

Side note: in an ironic tie in with the last battle, Morricone is said to be his favorite composer, he has used some of these compositions in his movies and eventually got him to do the score for the hateful eight, so please don’t use any of those as a source since we just did that

This is a decent chunk of music to go through, and this can be a busy time of year, plus some people may want to watch some of the films so let’s give a leisurely deadline of the 4th of December

Legnth should be close to 2:30, a little bit over is ok but please don’t run with that. There were a lot of entries the last couple rounds and space on the soundcloud is limited.

Voting and points will work the same as last time
Top 3 with a 3,2,1 point system
If a lot of people join this one I think it would be nice to have the top two collaborate for the next one as joint winners since we are getting so many participants If everyone is ok with that

Send you entries to @blaize by sunday Dec 4th 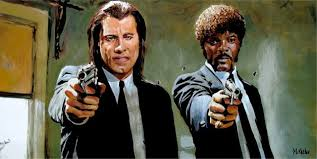 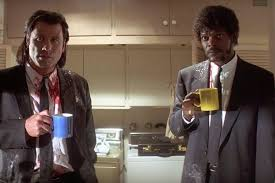 when can we start submitting beats? lol not that I’m done or anything

Wow that was fast

I had the soundtracks to Pulp Fiction and Kill Bill when I was in high school. Say what you will about some of his more recent efforts, but the man has an ear for a needle-drop

I guess I’ll dip my toe in again.

Get it? Toe. Feet. Tarantino.

How many “The path of the righteous…. “ will we get? Any over under? We need a bookie.

Send me your beats in PM when you want, from now to the 4th december.

Will certainly take part in this one

@1-2 sorry for the annoying question, when you say Tarantino movies do you mean only the movies where he full on writes and directs the whole thing, or are soundtracks for his screenplay movies like True Romance or Dusk Till Dawn, ok?

Not annoying at all, good question. I wondered if someone would ask, maybe I should have specified. I almost said no robert Rodriguez. I think there is so much in the core films, written and directed, that you should be able to get something there.

It’s already so much material and pretty open. That said I don’t really care too much so if you have something special in mind - I mostly want people to capture the vibe of how he is kind of a crate digger in movies, selectively recontexualizing songs rather than using a score. Natural born killers also has some interesting tracks. Not sure how others are feeling, I would say try to go for the core Tarantino picks, but keep it loose if that’s what you need

That’s fine cheers, id be happy even if we were using one particular film so the main core ones are ok with me.
Obviously some songs like the Minnie Riperton song in Jackie Brown have already been used in many a classic hip hop tune already but there’s more than enough to choose from

Yes true, so much from any one film. blaze thought we should open it up, maybe with so many people involved now that will help add to the variety.

It would be interesting to see everyone’s takes on sampling just one song sometime in another battle to put the magnifying glass on, techniques and chop selection etc by each person too see what’s similar and what people do differently. Each person having a more intimate knowledge of the source making their own tracks would make it more clear what sort of production decisions people made

Then we’ll have to add some snakes on a plane

I’ve never seen Jackie Brown or even Kill Bill for that matter, I was just reading through the soundtrack listings but I’ve seen all his other core films… I may give one of em a watch today as it’s my day off

I we being broad enough that True Romance etc counts?

I have an album to finish

this is not an excuse!