I would hope that Elektron used the Midi standard for this connection, in which case you can used any of the other connectors for this too.

They did, and you can also change to polarity to the “other” standard, so any adapters should work. The price of these doesn’t give me a lot of hope for a sensible price on the battery handle, though.

What “other Elektron gear” has such connections for MIDI? The Sweetwater page mentions that twice. Is there already something available, or is this perhaps referring to some future product?

Elektron accessories are definitely on the pricey side – although not impossibly expensive at the same time. I have their OverHub and like it very much.

I imagine the Powerhandle will be nice.

What “other Elektron gear” has such connections for MIDI?

All the future Model: products.

Yeah and those adapters look niiiice too, ones I’ve gotten packed in with other products are just black plastic.

Edited again to make it clearer 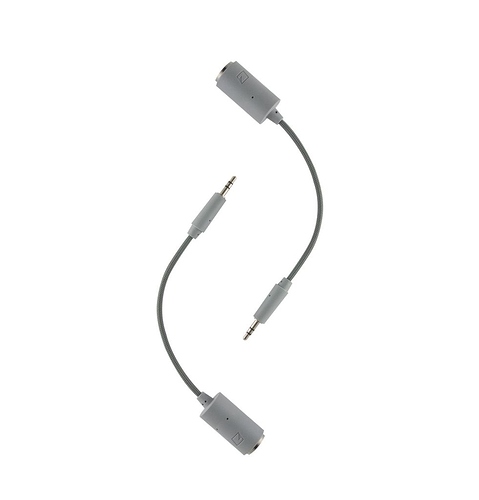 Picture added, bit odd to sell a pair when the box ships with one and you can only use two, but these look nice and they’re not that expensive for two - though you get a bit more in the CV kit for similar money - when I make these types of things I just go male to male, so it’s not an adaptor it’s a lead - it’s a classy touch to make the internal TRS wiring ‘switchable’ for folk wishing to use straight TRS to TRS for korg/arturia/etc stuff

For sure and they are very nice quality. I’m all in on the Powerhandle, as long as it’s not completely absurd, since it’s one of the main reasons I picked up the M:S.

They don’t look as good as the original ones, and I hope they work, but cost a fraction of the price (15 pln is like 3,5 euro).

The inside wire count and gauge of those will almost certainly be less than on the Elektron one. If you’re careful they may last. But I know from experience that even nice looking 3.5mm leads can fail if they’re made to a budget or if they’re not used gently. Cheap enough to roll the dice though!

I just got one Midi Adapter @ the Unit.

Optional I can buy 2 Midi Adapters for 29€. I tried another Adapter but it did not work.

Do I need the Elektron Adapter? What to do then with the third adapter?

As far as I am aware - Elektron have actually gone the extra mile to support all variations of third party 3.5mm>DIN (of which there are two variations) - so any third party adaptor for a Korg/Arturia etc should be fine. -you then set the type in software (I have no idea whether this can be done per port - so I strongly recommend getting the same type that the Elektron one is - I am sure this is discussed (or ask support)) That way you can mix match without headaches

Yeah, it just comes with one, although the spec on the Elektron M:S page says that two come in the box.

As avantronica said, there’s two different spec midi to minijack adapters - basically both are wired in the opposite way to eachother.

The MIDI In port is will automatically configure itself for either standard, so any adapter should work with it without any configuration. The MIDI Out port needs to be configured in the Settings to use one or the other polarity. Here’s the bit from the manual. 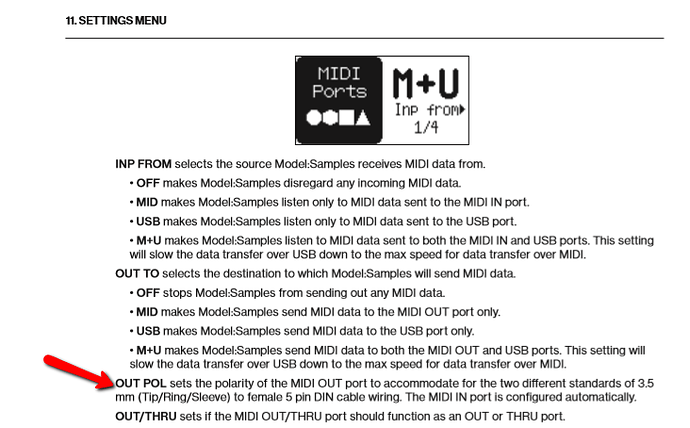 Obviously using the official Elektron ones negates the need to change the configuration, but they are expensive. There are other third party ones that are cheaper that use the same polarity as the Elektron ones, but I don’t know specifically which ones, so I can’t point you directly at them. As to what to do with the spare one if you buy the set of two - I guess keep it for when the dog chews one of the ones you’re using.

Did you have 1 or 2 midi adapters included in The box?

Hello, I purchased days ago The M:S, it came with a single midi-adapter cable, but on the website it specifies there are 2 included in The box.

Did you guys have 1 or 2 midi adapters included in the box?

says two. comes with one. dumb but whatever lol

So this adapter can be a Type A or Type B?

this adapter can be a Type A or Type B?

Yes. You can switch the polarity in the M:S’s settings.