I think I’ve wrapped my head around this.
Let us know how it works out when your cable arrives.

I will have to write the firmware for the rk002, but it seems as easy as the “hello world” example here after : RK-002 MIDI Processing? Just DUY it! - Retrokits

Here attached is the Arduino sketch you can upload as a custom retrokits rk002 firmware Retarget_Multimap_Digitone_1.2.ino (2.7 KB)

Reminder : the goal is to play multimap patches from the midi tracks and have the pitch/modwhl/etc. sent to these specific patches. So that, in addition of the audio tracks, midi tracks are now a 4 voices drum machine with 5 custom multi-parameters knobs per voice (8 voices limitation still occurs !)

Here after is a beautiful diagram in order to understand the setup : 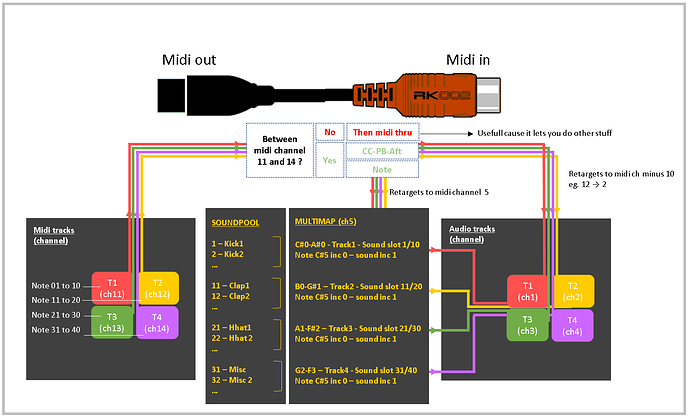 Nice work!
I’ve got a RK002 lying around somewhere looking for something to do.
I’ll give this a go when my head is in a more technical frame of mind.
I haven’t really delved into multi map yet so will no doubt require a bit of head scratching.
I may come back with questions

EVERYTHING EXPLAINED! I encountered the following issue PRESSING

TWICE… BUT NOT ONLY HERE IS THE SOLUTION A - PRESSING STOP TWICE SCENARIO 1 - Hook up an external synth (preferably a drum machine to have a loop) through INPUT L/R and set an EMPTY PATTERN (no trig on any track) with some DELAY / REVERB on the MASTER FX page. 2 - Press

MASTER FX ARE APPLIED TO THE SOUND ISSUE 3 - Press

MASTER FX ARE NOT AP…

I’ve only had the Digitone a couple of weeks so this is a really basic tip. You can get interesting real-time re-trigger style effects on your drum track buy using FUNC and < or > while in record with the track playing. The triggers will move around sequence and the “play head” will move over them slightly chaotically but it nearly always sounds musical.

You can get interesting real-time re-trigger style effects on your drum track buy using FUNC and < or > while in record with the track playing. The triggers will move around sequence and the “play head” will move over them slightly chaotically but it nearly always sounds musical.

Can you explain what you mean by this? I don’t understand what you’re doing to get the trigs to move around the sequence…? Intrigued.

FUNC and < or > while in record with the track playing

While in record mode, hold func and use the left right arrows

Ah, gotcha - thanks. I was looking for that elusive OR button…

Cool now I know what he meant and yes I imagine that could be interesting. Will try it.

I’ve just discovered you can copy and paste names in the pattern Rename menu! Very useful when naming variations on a pattern eg “patt1A”, “patt1B” etc

Use pattern chaining to effectively parameter lock the fx settings for external in.

….
Basically each pattern can have its own fx settings for delay etc but ( from memory) they can’t be parameter locked on each step
So basically use 16 patterns in a chain to recreate the same result of 16 steps in 1 pattern ( or however many steps/patterns you want )

This would probably work on other gear with external inputs and pattern chaining but no specific way to parameter lock all the parameters.

Ran into this by accident. I know some like or dislike FM because it’s easier to get that “ring/bell like” footprint from every sound than the sweetspot excellent sounds in between. Go over to settings, audio routing and disable tracks to master. Leave only fx to master. This way you’re left with only full wet fx Now send fx to taste and make settings to your chorus, reverb or delay and voila. Pleasant smoothed ambient scapes for the masses.

Found a cool feature which is a bit tucked into the manual, was added fairly recently.

This feature only works while in step record’s JUMP mode (press stop while holding record to cycle between STANDARD and JUMP step record modes). The difference between the two modes is the JUMP mode utilizes the length parameter to automatically create space between the notes as they are entered on the keys, where as standard mode simply places them step by step with no space in between regardless of the LEN setting or how long the key is held.

If you hold down YES while playing notes in JUMP mode, the length that you hold down the key will determine the LEN setting for that step, automatically advancing through the sequencer while you hold the key.

This is a really cool feature that saves a lot of finger work while writing a sequence in step record mode.

As long as the sequence is playing while in this mode, you’ll still have access to the metronome. If you want the track to be silent while you’re writing notes into the sequence, but still want to hear the metronome, you can simply mute the track.

Another related trick, if you hold function while rotating the LEN knob, it will cycle between traditional tempo markers (1/4 notes, 1/8 notes, 1/16 notes etc) and skip values which are not divisions of the current time signature or tempo.

Huh excellent, I can’t believe I didn’t know this! Thankyou

I tought PARAM + NO reverted the settings to default ? Like PARAM + YES is used to randomize the page, not save it to temp.

in a pattern if you mute tracks with ex : PTN + T1 (purple mode)
a PATTERN RELOAD press will unmute track muted with PTN + TRACK ; )