One and a half hour of Cenk doing his magic. Learned a lot of new tricks

Near the end Cenk hints at loading more samples than the 127 and backing up patterns/etc. Near the beginning he hints at more filter modes. Keeping my fingers crossed

Do you happen to have a non-FB link to this video?

Not sure if this link will work with you or only my Facebook. Copied the video mp4 link from my fb.

Cenk also mentions he hopes that input send to effects will happen (“should be possible. I hope so”).
Would be killer for using the digitakt as hub in live setup: Sequence your external synth via midi tracks and input it into the digitakt with effect sends <3

this one is really nice!
helps me a lot…
not only about how it works
but more about what you can do with it…

uhhhh how did he keep the DT running for over an hour straight with midi in and out and no crashes?? mine crashes about every 15 minutes on very basic level stuff.

uhhhh how did he keep the DT running for over an hour straight with midi in and out and no crashes?? mine crashes about every 15 minutes on very basic level stuff.

He seems to have gotten a bit frustrated at times for some reason. But the best part was when the guy asked about polyphony and then Cenk said “Yeah load up 8 tracks of the same machine and blast out a 32 note chord. BWAAAAH!” Made me chuckle

This is a fantastic demo because the more he gets to play with it the more he can show. Being a beginner in the Elektron world, seeing and hearing examples is essential. Great job Cenk!

For some reason I didn’t know that you could automate the Analog Heat ‘character’ selection via MIDI like that - talk about some crazy processing!

That’s really really fab that the digitak takes a lot of inspiration from the md.

I love the idea of buffers - cut, paste, undo.
So simple. Maybe in the future a buffer page feature could be included to hold say like options settings of 1-10 copy buffers.

The save states for mute and tempo is great.
From here I gather you could copy your pattern, focus on a single or few sounds - set it up with time stretch tempo retribution work arounds - name the pattern time stretch. Then use it as a breakdown or pause. Switching backwards and forwards bt patterns.

Seems like it’s a real time players box ala the silver souls.

Here are some notes on what tips he gave:

Adding movements to HH. Modulating the volume of the HH is frequently done. Rather than changing the levels per step, or using a LFO, record changes to the velocity in live recording mode.

Adding groove to HH. Choose a 14/16 step length for the HH track.

Creating a less stale beat. Snares lend themselves to microtiming, simulating a real drummer. Randomly change the microtiming across the pattern.

One page 4-4 kick drums. By leaving the track for the kickdrum to one page, one can easily mute and add the kick drum, without entering the mute mode.

Removing clicking sounds from sample manipulation by adding a little bit of attack to the AMP envelope.

The note symbol on the envelope imdicates whether the Hold length is determined by note on/off events or by how long a key is pressed.

Undo performance tool. Having a pattern, one can copy the state of a pattern into the buffer, make further tweaks, and then with the paste command return to the previous one. Applying paste a second time will undo the last paste.This way, one can toggle between two pattern, without saving them. If the first pattern already was differnt to the saved pattern one can switch back to that first one by reloading it. This UNDO also works with clear, copy, paste on the parameter pages. Press the button below the knob and press the record, play, or stop button. Pressing the same button again is an UNDO, so that one can use this as a performance tool.

Creating breaks with pattern mute mode. Enter the purple pattern mute mode by pressing TRK and Bank TWICE. Muting now a track, and realising thereby a break, one can return to the full loop by jumping o a new pattern.

Emulating a sidechain ducking effect. Using an LFO assigned to the volume (or overdrive), using the sawtooth shape, in sync with the bpm, depth of -64, and the LFO being trigged with the sound.

great! thank you very much, Olaf!

Thanks for the summay, Olaf.

The facebook link crapped out on me (I guess FB blocked external linkages) before I completed watching the vid.

I’ll be checking the Cutoff Pro Audio youtube page ( https://www.youtube.com/user/cutoffproaudio/videos ) for a posting (hopefully) in the future…

I don’t do Facebook either, but you can watch the video without loging in.
I just watched the first half using Safari on my mac using the link in the OP.
When facebook asks you to login or register, just click “not now” then click on the video and it should play. Doesn’t work on IOS, that requires a facebook login.
It’s worth a watch, another really informative Cenk video!
Thanks for posting Joshua.
I’m going to try to catch the rest of it later today if I get a chance.

At 51:30 Cenk says “hopefully RYTM will be compatible with this,” this being the faster transfer of sample downloads with the Transfer utility. I think he means Mark i RYTMs. Any one else think the same? I’d like this change a lot.

ADDED: He must mean Mark I, this video was made before the Mark II was announced. Right?

The Digitakt review with Cenk just posted on Sonic Labs: 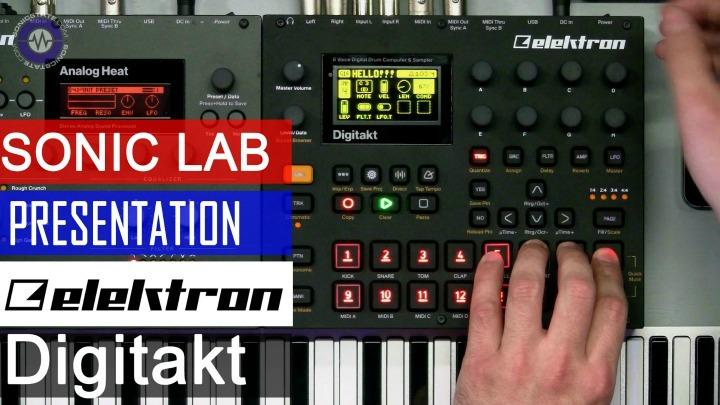 Cenk shows us what it can do (Video)

This post was flagged by the community and is temporarily hidden.

Cenk makes mention of comments made online, they’re definitely paying attention to criticism and suggestions. He mentions more filters, perhaps in the future as for instance. I see the Digitakt still in relatively early stages, i look forward to the developments, especially given how much i already like it.

its a nice clear presentation of digitakt and will no doubt sell more units , nothing particularly new but a little more midi now that its working.

i do hope the things in the pipeline match the potential of what is hinted at in the videos , I’m sure cenk/elektron are aware that ‘we’ on the internet are a rabbid and ferocious bunch who will analyze each word and extrapolate to some bizarre conclusions.

i like my digitakt , i use it a lot , i think the limits help it sit well in my head , i know what to do for the results I’m after.