Can I attach a midi keyboard to Model:Samples?

I have a very basic question (I think!): can I attach a midi keyboard to my Model:Samples and then play the keyboard directly on top of the patterns without connecting to a computer or other device? Or if I attach a keyboard does it just become a way to control the Model:Samples?

I’ve connected my Novation SLMk3 and that’s a lof of fun!

Cool! Thanks for the quick reply

I’m asking because I haven’t bought a keyboard yet so want to be sure before I do (I’m probably going to go for one of the Native Instruments Komplete Kontrol series).

With the Arturia Keystep, you get a cheap but powerful small keyboard (with onboard sequencer, arp and you can easily choose the channel - 1 to 6 - you want to play on)

Hmm, thanks for the suggestion. Yes, the Keystep looks like a pretty cool option that I can see working really well. Thanks again!

I use mine with a Keystep as well, it is perfect! Being able to quickly switch MIDI channels is huge, as you can switch between different synth sounds on the various tracks on the M:S, somewhat like controlling up to 6 monophonic synths from a single keyboard! Pairs especially well with single cycle waveforms, in my experience.

You can also pass the keyboard’s MIDI signal through the M:S to control other external synths using the MIDI THRU mode. This is great if you want to stack a bunch of sounds on each note, for example you could control multiple external synths and also layer up to 6 sounds from the M:S on each key press. MIDI THRU does pass through polyphony, even though the M:S doesn’t support polyphony.

The big limitation right now for controlling external synths is that you have to choose between using the M:S keys and sequencer (in MIDI OUT mode) or using the Keystep’s keys and sequencer (in MIDI THRU mode), you can’t use both at once. Hopefully in a future firmware update that will be possible. Even with this limitation, there’s a heck of a lot of ground you can cover.

Another thing that seems a bit odd to me, when you press a note on the Keystep the M:S tracks will make sound even if they are muted. So basically the mute only applies to the M:S’s sequencer, it doesn’t mute when there’s incoming MIDI. Not a huge deal as you can just turn down the volume for that particular track if you don’t want to hear it.

Excellent, thanks for the advice and ideas. I can’t wait to get started and experiment. Even if there are some limitations it sounds like there’s a lot to play with

Hi,
I just bought a model:sample and already have an Arturia minilab mkII, I did a fast try yesterday to set the midi parameters on each machine but no success, even with the documentation.
The documentation is only explaining the inside model sample view, the other side is missing.
Could you please explain the kind of settings you need to set on each side ?
I don’t understand the settings bringing a midi channel for each track ? Does this mean that if I want to use the buttons on the Arturia side to control buttons on the Model:Sample I need to change the midi channel to address each track parameters ? What if I use same midi channel for each track ?

Correct you need to switch channels to whatever channel the tracks MIDI IN is set to. On the Keystep at least this is very easy by just holding Shift and selecting a channel.

Hypothetically yes you could set all 6 tracks to receive on the same channel. But do you really want to trigger a sample on all 6 tracks with every key press? To be clear here, all tracks will be receiving the MIDI data you send not just the one you have selected for editing on the device.

Not quite, you set the controlling keyboard to the Auto Channel of the MC and whenever you change tracks the two will be connected

Wait seriously??? How the hell do you set that up? My mind just exploded.

EDIT: looks like it is mentioned in the manual, I probably just didn’t care at the time when I read that bit and promptly forgot. Wow this is excellent. Now if only they’d fix the MIDI Thru issue.

Set the KS to that and it acts like the onboard keys, especially useful for parameter locking etc

Wow and I bet that would fix the issue that I have been having where I press keys on my Keystep but it doesn’t trigger samples while I’m digging through the patch library. It instead triggers the channel current preset instead.

Wow dude you solved multiple problems for me, thanks. Lol and I thought I was originally commenting to help, ended up learning more myself.

EDIT:
Alright well solved one of my problems, the auto-channel bit worked. Unfortunately even when sending over auto-channel I can’t find a way to use an external keyboard to trigger samples you’re previewing from the folders.

Great.
And how to use the Arturia pads to select Model:Sample tracks ?
Should we send some CC ?

It’s not one of the supported CC commands - you’d need to do some deep-dive sysex tweaking to do this via a pc e.g.

On another side, I can select patterns with PC, but still searching how to start play

Might be worth checking out something like MIDI-OX that lets you monitor all MIDI activity on a device (i.e. PC, audio interface). You might be able to get the command info you need from there. Here is an example of the output you see as MIDI commands are flowing: 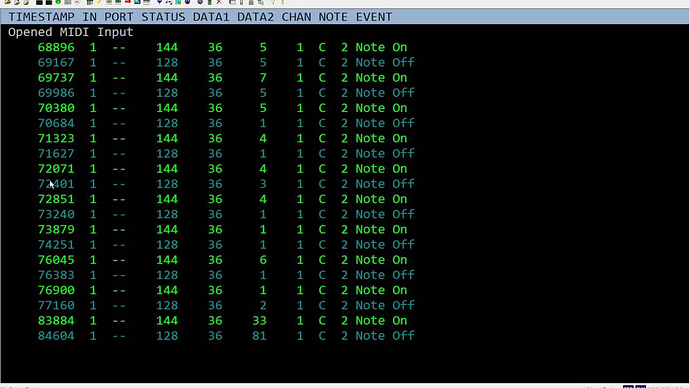 still searching how to start play

it’s just a standard midi transport message - but not all controller devices support sending it, there are some though, but there’s no way to control seq recording on the Elektrons, that’s hands on too

I already use MIDI-OX, thanks

But which one ? CC number ?