You could get the sound of both by many other means. But if you had both. You’d only have both.

And whatever else you could do with both!

Seriously, I’m not a fan of the 909 sound- but for looks alone, it’s very compelling.

Well, maybe an analog 303 clone could be next?

Well, maybe an analog 303 clone could be next?

I only want these so that I can hopefully finally get on with my life. All my attempts to get rid of my nostagia induced 808 & 909 cravings have so far been unsatisfactory… I just want the og analog sounds, the og mixbus and the og accent behaviours without having to solder anything by myself. Not even sure how I’d be actually using them at this point.

Anyone who has used the og boxes knows what I mean… the way you massage the patterns with the interplay of shitty mixbus and the accents, I have no sample packs that reproduce it.

Looks promising, except for the rubber buttons…

I think it’s an interesting product. For Less then a TR-8S you can get both the RD-808 and RD-909. They have individual outs for every instrument and analog filter + wave designer that can be sequenced.

There is totally a market for old school drum machines. Just look at the huge success of the TR-08, TR-09 or even MFB Tanzbär. And they all cost more.

and the fact that an original 909 is like £3000 surely? I think there might be a LITTLE demand.

What’s disposable about it?
Let’s be honest, a lot of us lucky buggers on here buy and sell far more expensive gear at almost irresponsible levels.
Is it the price?
Or is it the production process?
The volume being made?
Or is it just because it’s behringer?

Not trying to be a dick, I’m just curious, because to me it looks like following a similar low-cost, high volume ethos that a lot of other manufacturers have been getting on with for a few years now to great success and acclaim.
And let’s not pretend Behringer are the only ones to do Roland clones, they’re just the first ones to do it on such a mass market basis, which I suppose makes it a bit disingenuous.
I won’t buy it, I’m happy with my TR-8, but if it sounds like the OG, it will make a lot of people very happy.

One good and positive aspect about these Behringer offerings is that it will hopefully finally shut up people moaning about the vintage prices and put these supposedly ‘out of reach’ sounds into the hands of said moaners. Meh, personally I think its all a bit boring - and 20 years late.

I’m with you now, sorry, went off a bit there.

The discussion will be a lot more interesting when the RD909 is actually available and people who know what they are doing did some reviews. Maybe people will be less enthusiastic when Behringer´s clone is not as accurate as advertised or not as good as the tr8 / tr8s. Both haptic an optic play an important role when I accept an instrument to be a clone of another one.

Hey elektronauts. What do you say about the upcoming behringer 808 , 909 drum machines ? They are on my number#1 wishlist this year . i heard the sounds gorgeous , they are looking super nice and the price is perfect . 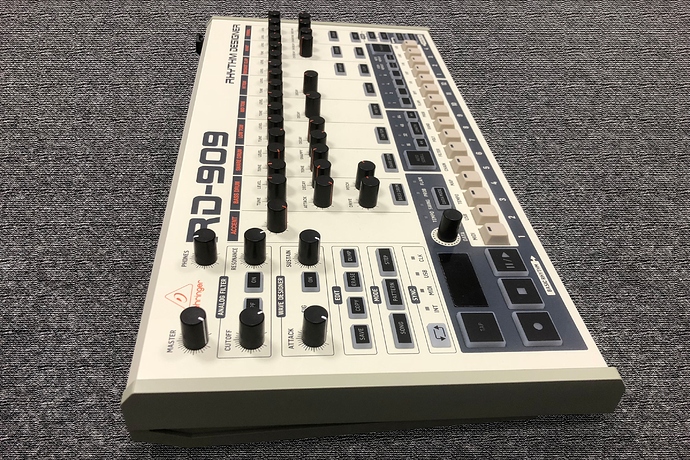 Looks nicer than the 808 at least! Never been a fan of 909 sound though personally.

TR-909 prices will continue to rise regardless.

Honestly. Looks wise they done a better job than their 808.

I remain firm on these blatant rip offs. Behringer for me are a company who make hissy cheap mixers and latency laden audio interfaces. Regret every penny I’ve spent on behringer gear. I Couldn’t even sell their crap I’ve bought second hand. But I should know better. They are a value brand not a quality brand, even behringer themselves would probably cop to that

Now if Acidlab makes the Detroit that would be a good competitor. I wonder what held production back. Plus it looks very industrialized

That post exactly sums up my feelings and hopes too!

Each to their own I guess… can’t really work up enthusiasm one way or t’other. It’s interface and look doesn’t particularly entice me and whilst I’m sure the sound will be decent, I doubt tha there will be much difference between this and the ACB emulation from Roland as far as comparing to the originals is concerned.

I remain happy with the metric tonne of samples that I can use in my other gear. If at some point in the future I felt the need for a more hands on “authentic” experience, then I’d probably be on the look out for a cheap second TR8 or TR8s.