they received program change messages correctly when patterns had PER TRACK length settings. As it is now, the one bar late issue makes their receiving of PC messages something that limits their usefulness as a combination.

Right now, my live setup is the OT/DT/DN/Micromonsta2/iPad. I am going to add the Syntakt to it, and I’d love to be able to ditch the iPad all the time, and the OT occasionally, but since I can’t send reliable pattern change messages due to the PC and PER TRACK bug on the Digis, I’m kind of stuck using the iPad as my pattern changer. I’d use the song mode on the OT, when it came out for a show, but that also doesn’t fix the problem on the Digis.

There has to be an easier way of sending a bunch of PC messages to multiple boxes beyond adding my iPad to the rig. Any ideas?

On ableton i use the delay compensation feature. Setting my prg change tracks to -300ms is early enough for all my devices

This is being discussed here too afaict …

Hey, Am I the only one who think it is absolutely shameful that Elektron gear as slave still has the problem of one bar late when syncing with other gear on pattern change ? This bug is known since a lot of time but nothing has been done for such an important feature which is syncing machines. I am writing this post to let know Elektron that this issue is still very handicapping and I hope they’ll fixed it and if not I’ll be selling some Elektron gear as it doesn’t fit my workflow with such a…

…if I had plenty of time to practice and play Live.

So the Elektrons can’t change patterns in sync!? I didn’t know this. I was just gonna buy a DT or ST to use with my A4 but now I’m having second thoughts

This would also be solved by the much requested Direct Jump pattern mode as found on the A4, etc. You can skip over in place to another pattern between notes, bar lines cease to matter.

If you have a Blokas Midihub, you can use this to get near-instant pattern change via PC messages: 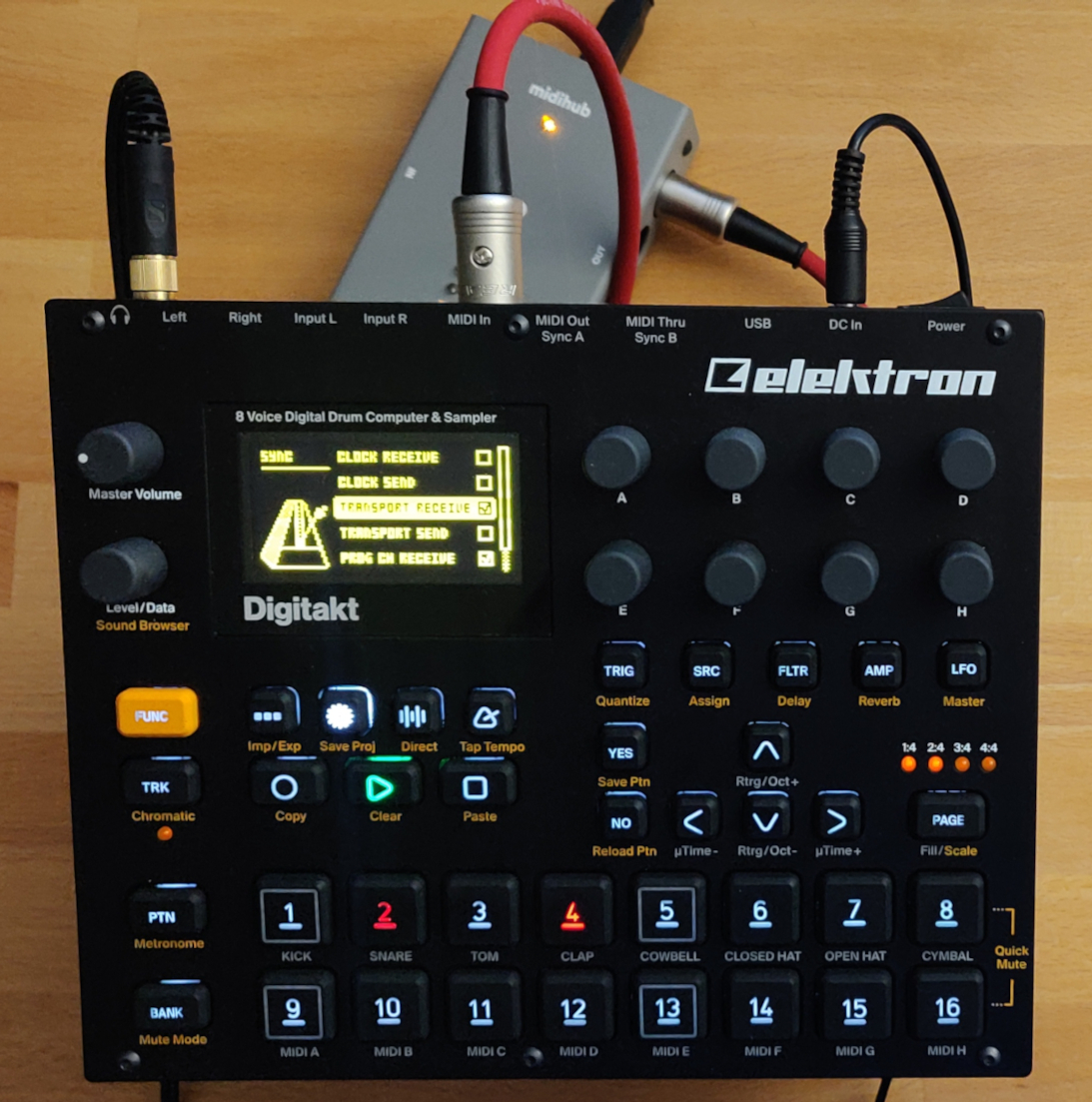 This pipeline implements near-instant pattern change for the Digitone and Digitakt. Other devices might also...

Have the Elektron bods on here ever commented on this major bug?

Right right. I think I’ve even piped up in that thread. Haha.

Thanks for raising this.
I thought my Pyramid would “just work” to make Syntakt PC’s.
And that workaround in the linked thread may be workable, but having to do something like this is ridiculous.
Definitely considering cancelling my ST order, because I thought it would SAVE me time, not WASTE my time.

Actually, f^*# it. Cancelling the ST order now. I’ll get a Volca FM to pair with my AR instead.

I think “direct jump” should be a standard on all machines also. It has been argued that DT & DN don’t have song mode because they were designed for live improvisation yet the lack of direct pattern jump seems to contradict this claim.

I’ve come to just manually changing the patterns in my setup. I generally don’t work on more than two boxes per track, only occasionally three. (MC, OT, DN, Drumbrute)

I do remember the issue though when I wanted to midi control all my gear from the OT. Really a shame they haven’t figured it out.

I have clean pattern changes happening on my set up.
OT master sending pattern change to digitone, TR8-S.
Then midi splitter to analogue synths (being sequenced by OT.
No problems at all.

Interesting. Unfortunately I don’t have the OT.
I’ll keep an eye on this for a few weeks, see if the issue gets resolved or is absent from this new ST build.

All Elektron gear can change patterns in sync, you just have to set the master length the same. It just restricts things when using polyrhythms/meters as change length doesn’t work when chaining machines…

Yeh whenever I use alone the AK+AR (+A4 previously) they work flawlessly.
But almost everything I do with Elektron and DSI together is basically note on/off from Pyramid sequenced polyrhythms. I was hoping to fully exploit the ST pattern changes with the Pyramid, because P locks. So there’d be plenty of interruptions happening.
I’m still keen for the ST. Lovely thing it is. But it’s not going to work the way I expected right now.

Does having the master length the same but the pattern change length different still work? So could I have my master lengths all set to 256, but all pattern changes happen after 16 steps? If so, that’s at least a fairly acceptable workaround. The problem is when you have a 64 step pattern that is cut to 1/2 or 1/4 time for longer pad parts and such.

Maybe it is fixed on syntakt anyone verified?