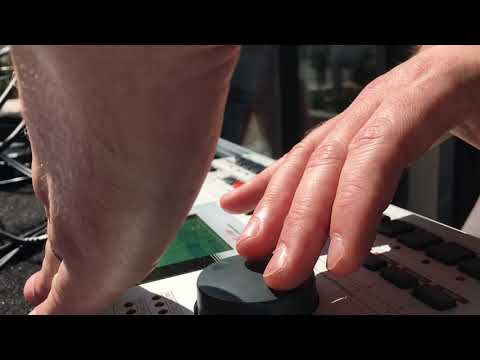 Special thanks to @PeterHanes for coming, it was great to meet you!

It’s a UW mk2, and while I’m using the live resampling features frequently to live resample a bar while bringing in the next track, the only other samples I have on there are a TR808 chain and a TR909 chain that I made and intend on releasing for a charitable sale sometime soon. Everything else is synthesis.

Also thanks to @JustinValer and the x.04 team, I couldn’t make music like this without the new features… I was trying to and it was a much greater pain

The whole set is a 200-line “song-mode” song, with various loop points sprinkled throughout. I really really enjoy making music just on one box - it’s so fast to go from pattern mode, jam out an idea, turn it into a few minutes of track by sequencing some mutes, then loop it and transition into the next track.

Sorry for the dumb camera angle - the day before, I was planning on taking my DSLR on a stand and my wife and I realized we accidentally donated our new DSLR to goodwill

- I guess that’s my charitable giving for awhile lol

Around 20 minutes in I hit the bug where the reverb can start feedback back on itself and does not stop until you double-stop the sequencer. Worst possible time to, during a transition to the biggest part of the set. Thankfully I lucked out and guessed the song position correctly when restarting so it continued from the right spot after a brief interruption.

Got one question already, if you don’t mind? What machine are you using for bass around 2:20, for example? Seems to sit so well in the mix! I like GND-SIN for bass but it can feel a bit overpowering sometimes if it’s not carefully designed and ”eq’d”.

Will really have to consider using song mode for my upcoming set as well.

gonna stick this on while I work today. looking forward to it

Good to see I am not the only one likes song mode.

Got one question already, if you don’t mind? What machine are you using for bass around 2:20, for example? Seems to sit so well in the mix! I like GND-SIN for bass but it can feel a bit overpowering sometimes if it’s not carefully designed and ”eq’d”.

I’ll have to look it up to give you a full list! The “out of control” sound is definitely the delay feeding back on itself, it’s one of my favourite way to do “builds” as it breaks apart so wonderfully. I think the part at 2:20 that is doing sort of 2-bar root notes is likely a filtered saw wave. Around 3:30 the big fuzzy bass that comes in is a GND-PW machine with the second squarewave at 0 and the third at +1, making it this big unison monster.

Enjoying this now. Thanks for sharing it! Really like it. Impressive movement, from stark to big sounds, and super neat transitions. I have questions (you don’t have to answer

What is that box (with a VU meter?) to the right of your MD?

This Saturday I am playing a 45 minute all-Machinedrum (and only Machinedrum, well and a Bugbrand Stereo Compressor) live set in Ottawa, outside of a small record shop / art gallery called Possible Worlds (1165 Wellington St W) at 2:30PM. Powered by x.04 firmware. Tiny demo video for the set for those of you who are on IG: I intend on capturing the whole set so I’ll have it up on youtube afterwards and post it on the forum. Cheers

Wicked set, thanks for sharing!

Had to listen out for the reverb bug - you handled it so well, I wouldn’t have noticed.

So while the sequence plays I’m constantly tweaking or adjusting either one track or all the tracks with FUNC+knob, so that’s always different too, although as I practice I usually come up with preferred tweaks in most spots as I figure out what works best.

If you look at my Youtube history you can see some other machinedrum sets that were less prepared - in those I was just jumping from pattern to pattern and then doing the live mute + live adjustments. Those sort of proved to me that I could play this long on the machinedrum and keep it interesting, so I went to the next step and turned the whole set into a song.

It’s really powerful to be able to jam an idea, then sequence it as a song, all on one box. For example, the last 2 songs in the set, I wrote both of them 2 nights before the performance. Sat down, made the two patterns, then added the sequences to the song and came up with an arrangement on the mutes.

I think a key thing for me is that I know how to get the sound I want out of this box at this point, so I can go very fast. I’ve been using the Machinedrum now for years.

Thank you for taking the time for the detailed answer. Inspiring stuff. I’ll make sure to look at some of those earlier YT vids too. Thanks!

Seriously stunning work sir - bravo. So impressive how you massaged such great sounding (and sequenced!) synth sounds and just enough percussion to be interesting and not overwhelming (which is always so tempting with so many channels)!

This is what I call a great set.

Fantastic, should NOT have sold my Machinedrum a few years back, right before crazy prices started…

How many patterns are in this set? And did you use NFX?

I’d love to learn more about this set. I rarely get such great sounds out of my MD (no UW)

Thank you! The recent feedback on this is inspiring me to get back into it.

No NFX, this was made before NFX was released.

The whole set is one long “song”, with many looping sections. I use UW resampling often to sample and loop a bar and then mix in the next track part by part.

This set came out of a few months where I would write a pattern or two into the Machinedrum daily. Then I moved the ones I liked most into the first four banks and arranged the whole set. So the set spans the first four banks, but I would start each new song on patterns 1, 5,9, 13 to leave space to write additional progressions or transitionary patterns.

Songs where the progression is mostly live CTRL-AL and adding/removing parts are mostly 1 or 2 patterns long, and the more progressive thought out songs are maybe 4 or 5 patterns at most.

I found this process really natural and easy to make progress day over day. Write individual patterns and kits, then jam on twitch to find what worked and didn’t, then stitch it together into one large set.