Where to start in the Daw-less world?

So im a guitar player for a dozen of years that also produces electronic, hip hop, ambient music in ableton, including sampling my own sounds etc… For a while now, I’ve been wanting to get some music done but away from the computer. For that I started eyeing some groovebox, synths and then found some other cool stuff etc etc…

In all my researches I’ve been stumbling in these two machines to introduce me to the DAW-less world which seem to me would give me really cool possibilities.
Being those:

I do understand the purpose of both is waaaaay different but I can find them (MC 707 and OT mk1) used for the same price. Was just wondering what do you think considering it would be my first DAW-less hardware gear for music production.

Excited to get either one though!

PS: menu diving is not a problem for me. 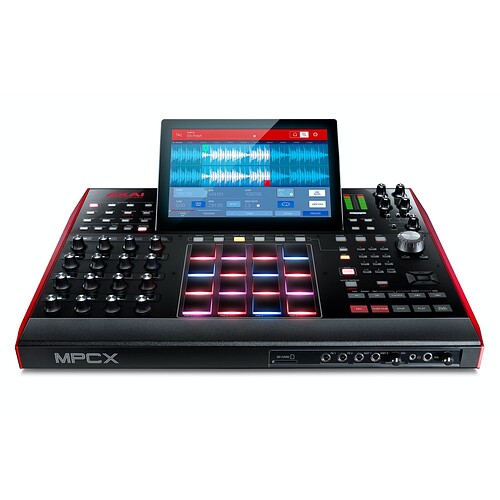 I would say the Digitakt is a great start if you have the budget. It’s limited but inspiring, and not as much of a time and money investment if it’s the first piece you get. For what it’s worth, I recommend you aim for fun gear before you aim for the elusive « all-rounder box », considering you may not love DAWless

At any rate, I hope you get something you end up loving

good luck and welcome aboard!

would be perfect but… …no faders

MC-707 is essentially a rompler based on jx/xv style architecture but updated a bit, so aside from retro synth sounds you also have acoustic samples as well as some digital stuff, the editing is quite comprehensive but not without a few annoyances - like being not able to save your own presets, there is a kind of workaround but it isn’t optimal. Sound quality, polyphony and fx are all quite good IMHO.

It isn’t too difficult to learn or use, and allows pretty quick knocking up of patterns, the sampling side is basic but ok.

Octatrack is much more open ended, not really a groovebox per se but can be used as such, but only 8 voices (1 per track at a time) but it can play back stems/longer audio files than 707.

This is also not a bad idea. Start slowly and not go to the deep end right away.
On the Digitakt similar realm range, do you think this one would be the most fun to mess around?

What’s your reason for wanting to get away from the computer? I ask because the 707 might not take you there.

If you want to do everything on the device itself I can’t recommend the 707. It sounds great and has a lot of features for the price, but it has long-standing bugs (or maybe just bad designs) relating to arrangement. For example, sequencing a pattern change will truncate the audio from the previous pattern. This means onboard arrangement is only viable if you’re happy with every pattern chopping off the previous one. It’s vexing because the arrangement system is very flexible, and has a lot of features that are rarely found outside of DAWs… but mine is back in its box at the moment, waiting to see if the next firmware update fixes things.

I’d agree that an MPC is the best all-in-one option right now, especially the One, which is cheaper than the 707 / OT and not far off the Digitakt. The array of sequencing tools, audio recording, FX and built-in synths makes for a comprehensive package. If you want to sample your guitar playing, it’s very easy to do so and you have a wealth of sound processing tools to work with.

The Octatrack is a great instrument and capable of serious creative mangling. It can do things the MPC can’t, and vice-versa. You are committing yourself to a unique workflow with the OT, whereas the MPC has a more straightforward interface and approach. Essentially I’d say the OT is a gamble - if it gels with you then it can be hugely rewarding, but if not you’re probably going to be frustrated by it.

I imagine a new MPC One and a second-hand first gen Octatrack are around the same price. Both are great, and I’d say the OT maybe has more depth while the MPC has more breadth - but it comes down to how you get on with them and how you use them. I put a simple saw wave through the MPCs arp, gated filter and looper the other night and was amused for hours. I can also pop a break into the OT and be similarly absorbed. So I’m afraid that’s not much use… I suppose my real message is, I’d take the 707 out of the equation and slip the MPC in its place.

Ah! Another option is the 1010 Blackbox, check the thread for that and the tracks that circuitghost has posted. Very capable sampler / sequencer, great for long samples, less immediately experimental than the OT and not as feature-rich as the MPC, but certainly capable of being a DAW-free production tool, and perhaps benefitting from a lack of endless distracting features (the original DAW problem, for me).

OT is a great place, drums from the samples and use midi to your synths, very tight

I’d recommend the MC-707 if you’re looking to work standalone. It’s easy to use, and the audio inputs make it accessible as an FX box. The sequencer on it is intuitive, and really just overall fun.

The most important thing, and this is quite a big important thing, is that all your work gets saved on an SD Card. (Some people lose all their hard work on Elektron gear when they upgrade the software on their machines… I’ve read it and it makes me not want to spend much time on the sequencer side of things knowing I may lose everything - I chose to sequence my midi on my laptop at all times, since it is generally safer on my hard drive)

I had an MC-101, but sold it just yesterday because I was only using it as a MIDI sequencer. The sounds were pretty nice, but I had a hard time liking it because I couldn’t really access many parameters at once. I knew this was going to happen, given it only has a few knobs, but I went ahead and got one anyways because it’s extremely versatile. I would have probably enjoyed the MC-707 a lot more tbh; but I had the chance to get an OT MKII in a trade and I went for it.

I would not recommend an Octatrack! You may need a laptop to get the most out of it. I’m digging my OT because I use a laptop at all times and work with midi exclusively. But I rarely use the OT the way it’s meant to be used - as a sampler.

Tape is the solution, always.

Have a lookout for the MPC One, you can do anything with it, sampling and sequencing is great, i also like the buildin synth and drum engine. Pretty hands on - cool box and cheap for starting in the daw less world. Also very portable device.

I loved the OP-Z as well, though it and I parted ways because I have a Model:Samples and OP-1, and that setup doesn’t make the OP-Z super attractive as it is a more tame version of both devices combined.
Plus the build quality is a big « meh ». It’s a great song writing machine though.

The Digitakt is fun and accessible, and you get deeper at your own rythm. There are many things I wish it could do that it doesn’t, but nothing is quite a deal breaker. It never quite becomes a DAW in a box, but for me as a musician, Digitakt is a great machine to fuel your creativity and sketch ideas quickly, then polish them a bit. Overbridge then comes in and makes transitioning to a DAW super nice for arranging, mixing and mastering.

That is my personal definition of « best of both worlds » : use a box for writing and getting in the flow, use a computer when you need to sit now, organize things and connect the pieces you have been crafting. The Octatrack seems to get you further down the production line of your songs, but at the cost of a steep learning curve, and a workflow that doesn’t ever seem to get immediate. Plus, no Overbridge when time comes to switch to a DAW. I have never tried it though.

Note : I don’t own a Digitakt, but have tried it extensively. I also want one really bad. If you want a glimpse into little things that show the Digitakt’s power, I recommend this video. It’s full of moments that make you go « ooooh, so THAT is a thing on the DT? ». They look like workarounds, but at the end of the day, they are still things you can do.

I always look at the new MPCS and just think… computer without a mouse or computer is still a computer. (I’m sure they’re fantastic)

I got an OT because I wanted a hub away from a computer screen & mouse. My set-up is small to moderate. My OT is sequencer, mixer and FX for my synths. I’m yet to get into sampling with it.

I like it, but I don’t love it. Yet. My use so far is fairly pedestrian. I’ve only learned enough to play and mix a couple of synth lines. I suspect the real love comes when you start finding those odd points between two workflows that only make sense in your own practice.

I bet the Octatrack also has a cpu.

computer without a mouse

I know what you mean. You also know what I mean though ;p