To get Everything Without Much (long winded post about setup ideology)

So one thing I’ve always tried to do with selecting machines to purchase is ask the question “Does it overlap too much with what I already have?” And by overlap, let me explain…

Overlap is something like…having two machines with one being a rompler AND sampler and another machine being a sampler. There is overlap there: the sampler aspect. If there is overlap, does the new machine I’m looking at add something in that realm of overlap that isn’t there? In terms of sampling, maybe the new machine has auto time stretch, or beat slice automation, etc. Maybe it can load stereo samples and the old machine cannot. It has to at least bring something to the table if it is going to overlap with another machine’s capabilities and central sound generation.

So with that, I have been quite minimalist in what I use for gear. I have no need for 4 synthesizers that have different ‘tonal qualities’ but essentially the same features. I have no need for 3 samplers with only minor performance or editing being a difference between them. There is no single box that does everything (well, maybe the Deluge with it’s new addition of wavetable synthesis, but my oh my, the entire package sounds rather thin to me…) and maybe there will never be, outside of expensive (and super huge) workstations like the Motif. But for grooveboxes and mini synths, I think I have found a setup that covers a lot of ground for the space (and price).

So first, the picture: 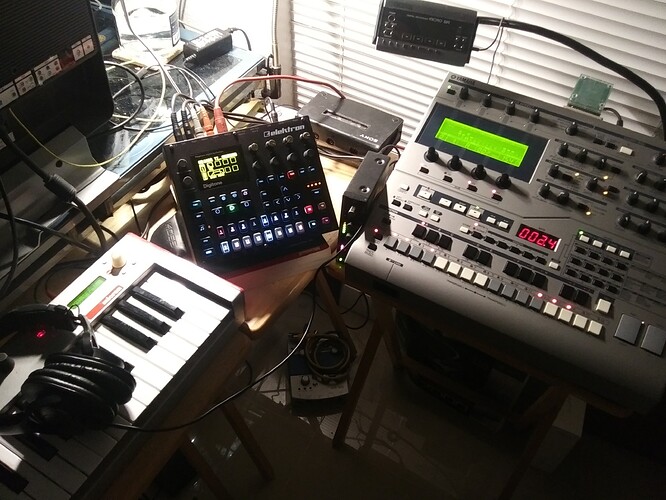 What we have here is a ‘dawless’ setup that covers quite a lot of sonic possibilities and can take a track from idea to final MP3 to upload.

The RS7K is essentially the RM1X and the SU700 wrapped up into a single box with additional per-channel EQ and master effects section. It’s the main machine most work happens on. To the left of that is the Digitone, Micron and NanoCompressor. The Digitone handles FM duties as it’s unique part of the setup. The Micron can do some FM, but is very limited, without even routing options, making it a wavetable 2 OP FM synth with a 5th wheel 3rd operator you kind of just ignore most days. And on top of that, the FM isn’t even the draw of it. It’s barrage of Zen-Core-like mimicking of famous machines of yore is. It’s a subtractive synth that has emulations/simulations/modelling (whatever the buzzword is today) of very unique and famous older synths. Filters from the 303, Moogs, Arps, etc. 3 envelopes and LFOs with a 16 part mod matrix to handle everything as well as 2 FX units that can be serial or parallel. I’ve recreated several famous sounds on it with no problem (though I will say it takes getting used to THE KNOB, but shortcuts through menus are everywhere so it’s not as bad as everyone wants to make it out to be). So that one box is a wall of expensive synths and new sounds made by combining all of the available ‘flagship sounds’ together. It and the Digitone are routed through the NanoCompressor before being fed into the audio input of the RS7K.

The Micron also acts as my keyboard for everything. I do play keyboard so that’s a non-sound-design thing that also is part of the ideology of ‘no overlap’. I don’t want 3 keyboards either!

So to recap for anyone looking for an idea of how to approach a hardware only setup that has maximum potential for audio exploration, here’s my idea. I have a ROMPLER, SAMPLER, FM SYNTH, SUBTRACTIVE SYNTH all controlled by a SEQUENCER that can kick the crap out of most stuff these days, at least when it comes to real time tomfoolery.

All of this is fed into the Boss MicroBR for final recording and maybe minor mastering, but I find that just taking the raw MultiBand Compressor output of the RS that everything feeds into is enough and generally use the Boss’ EQ sparingly to add a little sparkle or low end kick, but usually isn’t necessary.

As you would expect, the Digitone was the most expensive piece to add. The RS7K, I got essentially brand new 2 years ago in box and everything for 400$ USD. The Micron I bought brand new for 300$ on sale back in 2008 or something. The NanoCompressor I got used at a music shop for 25$ in 2014. I spent more on cables than I did for it. And then the Digitone…800$ shipped. The HD2SD solution for RS7K was an additional 100$ with another 20$ for the 4GB microSD card in it. This setup was built over years with one idea: do everything with as little as possible and, hopefully, not spend a lot of cash doing it.

I do have an MC101 which was a part of the setup originally. It was an additional rompler and what I would call a ‘sample editor’. What I’d use it for was to preprocess samples with it’s internal effects before sampling into the RS7K. But now that I have essentially unlimited sample storage space on the RS, I can do all of it internally via resampling, etc. I do plan on adding some of the better sounds on the MC101 into the RS’ hard drive, though.

So there it is. A very lengthy post about philosophical and ideological decisions made for a setup. As much as I’d love to just go hog wild and buy everything that tickles my fancy, that is a one way ticket to GAS. My wallet nor my studio real estate can stand that kind of torture. So it’s best to look at each piece of kit as “What does it do that the things I have don’t do at all or extremely poorly?” Sometimes it comes down to synthesis type, sometimes it comes down to midi features, sometimes it comes down to adding a lot of effects options, it’s really up to you what your ‘coverage’ needs. For me, it was sound types and synthesis types and just having a solid sequencer to run everything.

I hope folks out there get some ideas of ways to go about looking for their next purchase from this post. If not, I hope it wasn’t boring. If it was? Well…you didn’t have to read it and you certainly didn’t pay to read it.

Sorry for super bad sound quality, I didn’t really give much of a flip about audio quality, I was looking at final workflow feel.

But this is the setup in action.

Your stuff always sounds rad so clearly something is working

I definitely used to think this way more so, but now, for me, having access to different workflows that I think are interesting was in many ways more important than worrying about sonic capabilties overlap. Then stuff I create funnels down into one performance set up that then is used to make a song.