I’ve been thinking about this line mixer as an alternative to a regular desk, mainly because of all the stereo channels and 2 aux returns. Anybody on here have experience with it? I have a bunch of stereo boxes and this seems like a convenient option to sum them all together.

Yes I use one, nothing special, clean, basic, gets the job done.

Thanks. Do you use both the fx and mon sends for fx? Works as you’d expect?

Yep, its been in use for a couple of years, one weird thing sometimes happens on one of the channels the mute LED gets inverted, so when you turn it on sometimes the LED is showing that the channel is muted, but it isn’t, not a big deal as you can see from the switch that it isn’t muted, but it is kind of annoying.

But it is a cheap mixer, sounds better than expected, and there aren’t exactly many alternatives in rack format with the same number of channels and features.

I’m considering changing to a Tascam MZ223 but it doesn’t have as many channels.

it’s a solid mixer overall. knobs are a little wobbly but for the price, it’s to be expected. mostly I “set it and forget it” though so not a huge deal. another gripe is it’s kinda tricky trying to remember which mute button is for which channel at a glance, because the button locations alternate every other channel. the efx loop works well but I didn’t use it very often. I’m a big fan of employing a rack mixer with a patch bay and then just plugging into pedal effects as needed. that approach works great for me and saves a lot of space. I have upgraded to a Speck X.Sum and still use this approach, but I was quite happy with the Samson when I used it (and I occasionally still do if my setup starts to balloon even more, lol).

Kind of strange that there aren’t more line mixers with aux sends, i was looking for something to add to my setup enabling me to send different instruments to at least two outboards effects. Looked at Tascam but my experience with Tascam is not that good, okay for the money but quality and sound not great.

Looked at KL 8 which is really nice, but also only has one stereo aux.

In the end, I decided to add an ADAT expander instead, which enables me to create my own sends and returns. Of course, I need a computer to control the different mixes but it works for now. 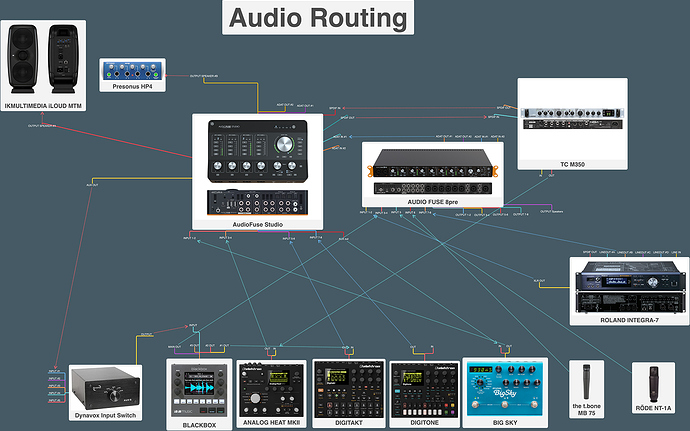 Trying to find the right mixer is a nightmare. I’m trying to setup a MD, Nord lead 2x, AR, A4, DFAM and Mother 32 with an eventide space and a delay pedal. So I need a mixer with 2 sends minimum and a few stereo inputs. Most mixers don’t have dedicated stereo return channels and so that’s 2 stereo channels gone straight away for the pedals…

I’m currently flip flopping between the Samson and a Zed 14, just because the faders, eq etc. seem like a nice thing to have.

yeah I think it depends upon how you approach recording and mixing. I prefer to EQ after I’ve recorded to get the mix to fit right, and tweak at the sources (synths/drum machines/samplers) to get close enough to that while writing. so EQ before I record isn’t necessary. but some aren’t like that and want it as close to perfect as possible before hitting record. both are fine!

I use mine with a patchbay also, and for the price I don’t think anything comes close for the number if stereo channels. I have all synths and stereo out from audio interface plugged into the mixer, but when I want to run them into the pc instead I’ll take them from the patchbay into an adat.

No quality issues with mine. I like having the stereo fx and monitor sends (though would prefer they were switchable pre/post fader so it was one less thing to think about). I also really like having the mono monitor send jack with volume on the front, which is handy for just leaving a lead going into a sampler or something without having to do it via the patchbay.

Never used the Samson but it sure looks good for what it is. To echo someone else’s statement here, there really is no perfect mixer. I’m currently using (studio only) a mackie lm3204 with two patchbays and a mackie 1202 as an aux mixer mostly for effects. Convoluted? You bet but it’s working for now. The 3204 is great but the prices are going up now. If you can find one cheap I’d recommend it. 16 stereo line channels in 5u from one of mackies better eras.