really, we should all support elektron on this recall.
“from best of times…to worst of times.”

hopefully they get it sorted promptly and can refocus on other aspects like overbridge, r & d, etc.

actually have no clue how many team dpts they have or if this will even affect any of them slowing down…but i just wanted to try and give some positive support.

just here reporting in from the unofficial hype squad.
(any community could always use a morale boost/more of it, rite)

I’m cheering for Elektron to grow from this. I hope every one of their employees can reminisce and remember the power they have brought to all the floors hot or cold 4 am or 420 bpm like they need to slow down. Maybe there under the bridge right now?

so, whoever has one in use and had no reason to complain about it yet, should keep it…

Let’s not venture into the world of offering advice or interpretation about a pretty clear cut recall … the guidance to cease using it is quite clear. For sure Elektron may realise this is a minuscule percentages thing, but rather than take that risk, they cover your back and cover their own.

Making it a one-size fits all solution is simplest and creates less long term worries. They take all the hit now and move on. We don’t know if this is a unique use-case manifesting issue, or a manufacturing error from a small batch or a rare susceptibility to damage or malfunction, but whatever it is, it’s clearly being taken as a safety-first decision whether it was likely to affect only a few, perhaps under certain conditions. Having ambiguity here with regards to this is not wise if it backfires in one situation, it seems like this would be their only option for all concerned even if some would never have come across any issues.

I had a nosey inside the tube to see how it hangs together and there’s some more complexity to the industrial design (if not the electrical design, which granted is simple) than is apparent externally. But without knowing how and where the short was manifesting none of us can know if it would happen in time, perhaps given certain contributing factors (e.g. not all AA batteries are the same size) or maybe it’s within the flexing cable that the tolerances of manufacture were off and shorting was possible. Indeed it looks conceptually simple and it may well be a victim of its neat design - i’d love to know how the +ve is carried from the right-hand closed end to the ring which the cable ‘pads’ connect with - this all seems well clear of the negative end/spring and the battery sleeve seems to be plastic (The handle itself it not conducting). So it’s a bit of a puzzler for me, but that’s not the point, if it was an easy fix i’d bet they’d still have to do a full recall on safety grounds in case somebody didn’t get the memo. I wish they’d bit the bullet like this when they spotted the low send levels in the AR FX sends, instead of retaining legacy mode to add a bit of confusion thus keeping a few folk happy. If there was a way to separate potentially dodgy devices from others it would still be too high a risk for the user and them to leave that element of doubt, it only takes one accident to take this in a different direction.

It’s a bummer for sure although still a nifty stand/handle, but for the sake of clarity let’s not cloud this with contrary voices unless you know that there’s a safe way to proceed for all owners. If Elektron can’t propose a path then it’s unwise (or dangerous) to suggest to anyone to take that gamble and keep it - this is clearly not advice you can offer without knowledge of the shorting mechanism - whatever it is it’s not obvious so there’s no way to disagree with the intent of the cease to use instruction which is pretty unequivocal.

Elektron | Within the music 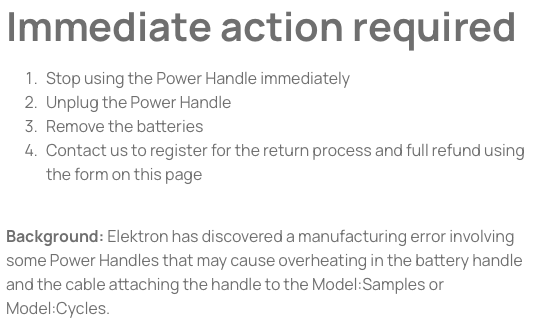 You can’t argue with that if you don’t know whether the manufacturing issue was marginal in nature, i.e. it could also manifest eventually in currently well performing units. I’ll mark your post with a cautionary note to prevent it being taken as a serious option by anyone browsing quickly

Yowza, what a disaster. I bet some folks at Elektron are wishing they’d just opted to do an internal battery on the model: series. A lot of the justifications for not having internal batteries to begin with were around shipping restrictions, etc., but it seems like between the monumental delays, price hike, and eventual recall, we can safely say the whole thing has been a proper fiasco.

I stopped using my DIY battery handle once I got an official one - it’s working fine, but I’m just going to send it back, and honestly I’ll be happy for it, since using AAs has been a huge pain in the ass. But before I do, I’ll try to take some better measurements based on the official device’s attachment mechanisms, that way I can make some improvements to the 3D models I have for the DIY battery system.

Before packing up the power handle for return, I used it to light one more joint, and toast one more marshmallow. Thank you Power Handle BP-1. I will miss these good times.

I’ts probably academic to even ponder why we can’t use the handle as is, but my curiosity about the origin (in case it may have been fixable somehow) took me to another thought in terms of where the issue could manifest. It could well be more plausible to envision it happening within the twisted-on plug body. In the pic you can see that the -ve spring (blue) is captive and relatively close (although apparently well shielded) to the nearby positive pad (red, 1 shown and also sprung) So these mechanical/moveable parts are quite close such that a bit of excess pressure might compress/twist the spring (which could itself have a fault/sharp-edge or be seated loose) or perhaps the shielding wasn’t moulded properly and can short within that area somehow - it seems like a busy little multifunctional part that is subject to the greatest variability of handling use in the field, has moving aspects plus needs force/twisting.

Pure speculation and pointless in any case, but from an academic interest and using a slightly more considered guess i wonder if there was some displacement of the spring either axially or rotationally such that the wiring within shorts, i.e. the tube seems less likely to be the culprit (in terms of facilitating the short) which could be a pity as the cable might have been a reworkable part - in any case there’d still be no option but to cease use given the potential realworld and PR implications. A recall is the safest/cleanest solution. It’s such a pity, it sold me on the convenience of going battery powered. This thread seems unusually quiet, i wonder what’s going down in social media channels or perhaps there just weren’t that many sold ? - i’d like them to redesign and rerelease but i’m 50/50 on that happening and i really doubt there’ll be any clues either way - now where did i put those rubber end caps, i knew i’d misplace them !?! 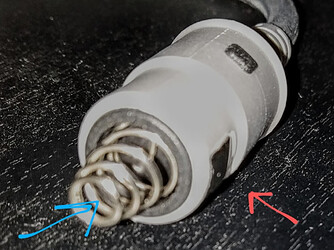 Ah shoot. Didn’t realize. Shame though as it would be killer! Especially with overbridge.

Sucks the power handle has some potential malfunctioning.

You got a legit belly laugh out of me with this one.

How does this recall affect the sound quality of the Octatrack?

Elektron’s transparency in this matter can only make the Octatrack’s already transparent sound even more transparent (assuming one disengages the filter).

Disappointed for the hard workers at elektron. I am sure the team will bounce back and remain positive. To those trying to use this as leverage for a new product release to make ‘everyone’ feel better, that’s pretty low act, not nice to kick them while they are down on this issue.

I respect honest people. Hope they get it sorted.

Although this is surely the right course of action, I’m so sorry to hear this! I can’t imagine how much stress the team is going through right now dealing with this. Industrial design is way over my head and mistakes happen. I hope a solution surfaces that everyone can be happy with. Take care and keep your heads up.

2 years delayed and now a recall? What a fiasco honestly

I definitely think you could be on the right lines with the spring being an issue. I still can’t understand why it was at that end - twisting action and springs is never going to end well.
There’s a reason every battery holder I’ve ever seen has them at the other end - that boing as you drop the batteries in is something I remember well from being a kid.

I’m not happy to see anything fail, but I do feel that the failure points of this design were, or at least should have been, pretty obvious from the beginning. So I’m pretty suprised it had to go this far, hence my disappointment in the whole thing.

i’d like them to redesign and rerelease but i’m 50/50 on that happening and i really doubt there’ll be any clues either way - now where did i put those rubber end caps, i knew i’d misplace them !?!

Someone on FB asked if there was going to be a replacement, and this was the answer. 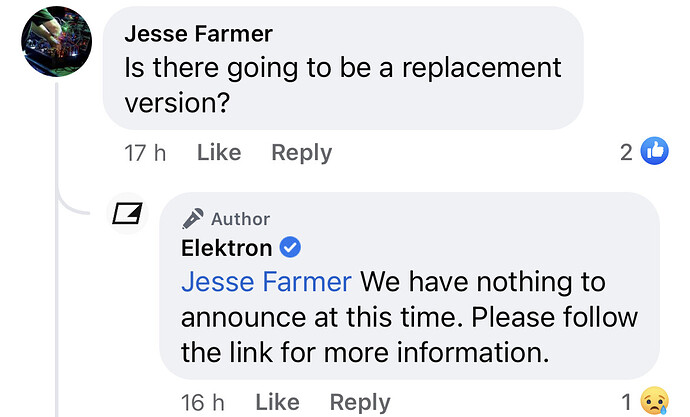 A non-commital corporate answer, but it is the only comment they replied to.

+1 on the rubber caps. I’m hoping I had the foresight to put them in the Power Handle box. Now just need to find the box.

That answer is in the FAQ Daren linked to above: Power Handle Safety Recall - #10 by darenager

To lazy to read everything but has anyone pulled a “analogue HEAT” joke yet!?