Hi… I was looking at some of the new Elektron sample packs for the model samples, they say the samples are at 48k and are compatible with the octatrack.

Is this correct re the compatibility? I’ve had problems in the past with samples not playing as they should because they’re at 48k.

Am I missing something?

You can play 48 khz 16/24 bit samples, they are played slower, around 1 semitone lower.

If you use them directly on OT they will be slowed a bit. It doesn’t matter for percussive stuff.

But otherwise you can convert them to 44.1 kHz without loosing much.

EDIT: @sezare56 is the Zorro of this place. OT’s Zorro.

Hey! Yes, that was my experience

Thanks for getting back to me… Yes that’s what I did with the samples I was given, but then strictly speaking 48k is not compatible with the octatrack

I thought I might be missing something in the octatrack when elektron said the samples are compatible!

While we’re here: I was about to do my own experiments, but do we get the same behaviour with lower sample rates i.e OT will act as if they are 44.1 and play them faster to compensate? I’ve got various stuff like old PC game audio @ 22050 and stuff like bloop from NOAA and kepler light curves from NASA come in @ 8000.

Converting is a breeze with sox but obviously no increase in quality, only file size.

I would think so but have never tried it!

do we get the same behaviour with lower sample rates i.e OT will act as if they are 44.1 and play them faster to compensate?

Yes, but it is highly improbable to get the exact value with Pitch, not very precise. Adding an lfo, you should be able to be pretty close.

I gave it a try. Nice flanger fx!

The closest I could get was pitch 1.4, with Depth 43 on lfo designer (designer value = 1 on step 1, dest = pitch, speed 0, Trig mode).
If someone has a better solution, I’m interested in!

Musically dangerous indeed!
Bad sample, no matter is the rate!

The comments suggest (amongst thousands that wanna tell you that sample rate can’t affect pitch - "don’t try to speak in sound engineers terms, cause you ain’t

) that it wasn’t the sample rate, but rather a guitar not being in tune (should have been changed for that song, but he didn’t take the guitar).
After the song he even hands the guitar off the stage.
Apparently, people compared footage from concerts and whatnot, anyways, the explanation made sense.

Either way, having backing tracks in the wrong sample rate sounds like a nice desaster indeed^^

Wow, I never expected to see anything like that… Its pure Spinal Tap

The youtube comments underneath are great, but it did make me wonder why he didn’t realise he was out of tune and whether or not other substances were involved. It reminds me of the scene in Wolf of Wall Street were Leonardo thinks he’s driven his Lamborghini home in one piece… 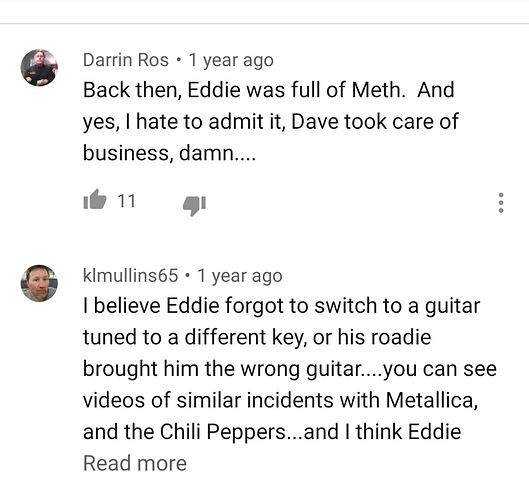 To me it seems like the guitar was out of tune, though^^
Why he didn´t notice, dunno…