I wrote this remix for a contest and for part of my live set over the last couple nights:

You can hear more of my live set here:

Using the octatrack finally clicked for me when I started approaching it as a “mixer with automatable FX”, sending other patterns into it instead of spending a ton of time chopping audio and arranging samples in the editor. I am finding this approach to music making extremely fast and rewarding, to build a pattern on the 3 boxes, then start looping the first x0xb0x pattern, switch x0xb0x patterns and start a second synth part with different FX to take on a separate role in the track.

The x0xb0x OS is slightly modified - I fixed a MIDI timing bug that has existed for over 10 years on it, and I modified it to respond to CC #0 (BANK SELECTION) as well as program change messages to change patterns. This lets me sequence the x0xb0x pattern changes from the octatrack without having to tie octatrack “parts” with x0xb0x sequences.

When I play live I also run this through a bugbrand stereo compressor just to give it an extra “oomph”.

Sounds great! I really like this 2-3 boxes plus OT as mixer approach too, works for me.

Hi Peter, thanks for inquiring!

March 3rd, 8pm-1am Shanghai Restaurant on Somerset in Ottawa. If you come, be sure to say hi!

Might use this thread to document the evolution of my live set if that’s cool.

So, after I wore out another TR606 pot and temporarily nuked the whole drum machine I decided to swap out the 606 for my machinedrum UW. To keep it simple and fast I just loaded it with MD909 and some x0x samples.

Now my time is being spent rewriting drum parts on the MD and trying to get my kick/snare to “pop”. I originally was just using the MD stereo out with master EQ and compression. It was ok but hard to get sounding great. I have now put my kick/snare on a dedicated out into the OT so I can compress and mix them separately from the rest of the drums. I think I will keep it like this for my show.

However long term I am not touching the MD that much live, and I think it might be more fun to have the OT handle drum loops in a similar fashion (lows and highs as separate loops, 2 tracks, maybe a third track for one shots). Then I’d have case space for a SH101, which would solve my other problem (the xoxbox can be a bit monotonous and I want to move past acid and more towards extrawelt-like minimal electro)

My show was last night! It went pretty well. I couldn’t hear myself super well, but the crowd liked it and the promoter wants to book me again and I might get a few other gigs out of it so that’s a big win.

Since my last post I added more complexity to my master chain. When I played last night, from the Octatrack I had a master stereo pair containing everything EXCEPT kick, snare, and sub. And then on the CUE bus I had a mono signal of just kick, snare, subwoofer. The stereo mix went into an alesis 3630, sidechained by the kick/snare/sub channel. Then it went into a little mixer which mixed the two sources, and then finally into the bugbrand stereo compressor. I had the 3630 only doing around 5-6db of gain reduction, just a touch. However read on as I don’t think it was really necessary to have such a complicated master bus setup. 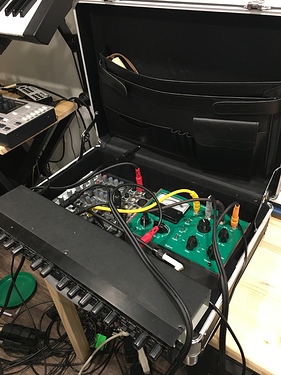 LESSONS I LEARNT / MISTAKES I MADE

The front of house speakers were in front of me but I was basically standing over the sub, so I felt like any low 303 notes were standing out compared to the rest of the pattern. I had a monitor pointed at me so that helped me hear what was going on… still hard to know what’s going on in front! I had a buddy in the crowd who is also a producer, he helped a lot giving me feedback on sound quality with some hand signals. But I wonder if people maybe set up instruments to either be “played on the sub” or “not played on the sub” either by EQing out the bass or just by choosing the pattern range to either hit the sub or not.

I believe I was overthinking it with the dual compressor scenario. In my head, I figured I needed to maximize my loudness so that I would be as loud as the DJ before me or whatever. In reality, we had the tiny rental PA at like 2/10 volume and it was shaking the walls of the place. The guy after me had a 303, 808, 909 into a mixer. No compressor. He just turned up much louder on the PA than I was and his set was so much punchier than mine because of that. I am going to try to snag the recording of his set because I want to compare the line-out VS the live feel of his set. I suspect his recording will be very dynamic, lots of head room, and feel much less produced on a recording.

The other side effect of having all that master bus gear was that I got exhausted setting everything up and didn’t bother recording video of the whole set… there wasn’t a great place to set up the tripod anyways. I regret not trying something anyways now that it’s over and I just have a few cell phone clips. Oh well.

My first pattern I played was supposed to be a “get people’s attention” sort of thing. It’s some robot voices repeating “gravitronic” (my current pseudonym although I chose it around 2008… might be time to change it) and then a bunch of noise swooshes and one shots and stuff. It’s also not similar to the rest of my set. So when I went on and pressed play, the mix felt way too loud and all over the place, and I started trying to fix specific channels instead of just turning down my main mix. So then my kick was super quiet for the next couple minutes. Also I think I spooked some people who then went to have a smoke and not listen to my noise, lol.

I had my cell phone in my live set case running a timer so I could see how long I was playing. This was super useful because on stage you have no real idea how long you’ve been up there for without some feedback. In my case, after I spooked myself on the intro, I rushed the next couple transitions and used up 5 minutes of music in 2 minutes… so I had to slow down stuff afterwards to extend the mix. This was really useful.

Also… I shook the sticker off the subwoofer and it fell on the ground.

I am quite glad it is over, I have been obsessing over this live set for the past 2 months. Now I’m going to record it into stems, back up all the project files, and keep evolving it. I might move away from the acid sound. It was a great starting point since it’s relatively fast to write patterns and tracks, but I want to be writing stuff that’s a bit more musically challenging and progressive. More SH-101 and machinedrum, less 303 and x0x drum samples. Also a lot of my favourite moments in my set are samples from the jx3p. I love that synth. Anyways.