Just a heads up for anyone who maybe interested…
http://www.motas-synth.uk 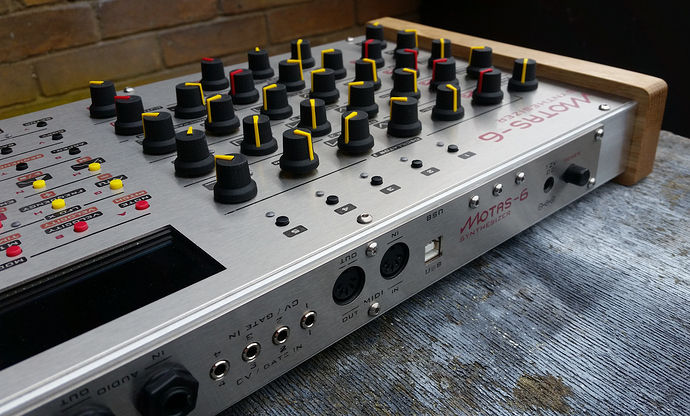 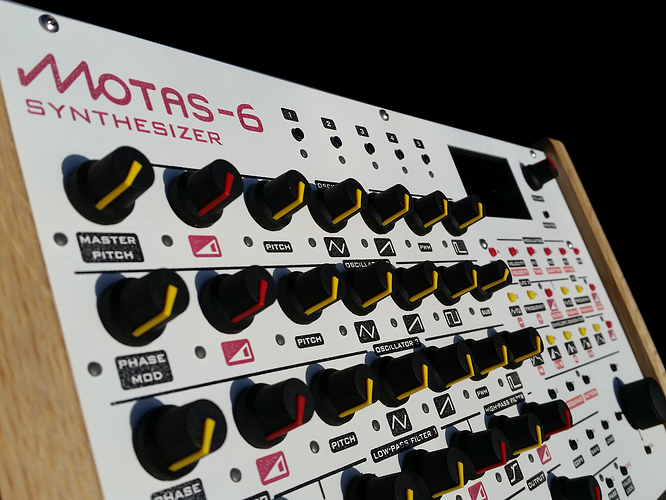 Sounds great! Thanks for sharing. I wish I could afford it!

Looks and sounds nice! I wish they had done some phase modulation demos. Or at least some that focused specifically on it. Curious about what’s inside.

I received an email from Reddog Music shop, apparently it’s exclusive to them so far…
Thought I’d whack it on the forum since it hadn’t been picked up by the phenomenal radar systems we have here

Been eyeing this up. Every parameter/knob has its own lfo and adsr, totally 37 lfos and 37 adsr inc master assignable lfos and adsr. 3 filters including a 303 model.

That’s some next level shizz right there, just the modulation options alone are a sound designer’s dream.
Has anyone actually seen one of these in the wild yet?

This synth seems to have largely gone unnoticed which is a shame, I recently took a bit of leap of faith buying this as there’s not a whole lot to go off in regards to demos but I’m really impressed with the sound of this thing and obviously the modulation options are out of this world!

Jon the designer of this is a really great guy, I asked him if he could add microtuning via scala files and to make the step lengths of the two sequencer lanes adjustable and a month later he’s done it as well as giving you the choice between unipolar and bipolar envelopes, I can’t think of any other synth that you’d get that with.

I’m planning to do a demo of this thing after I’ve finished moving house, if anyone has any requests for some patches they’d like to hear feel free to suggest some and I’ll do my best when I get around to it.

Jon the designer of this is a really great guy, I asked him if he could add microtuning via scala files and to make the step lengths of the two sequencer lanes adjustable and a month later he’s done it as well as giving you the choice between unipolar and bipolar envelopes, I can’t think of any other synth that you’d get that with.

PreenFM2. that’s how i got 8-timbral firmware version.

anyway, Motas-6 is verey interesting, never knew about it before.

I need to check out the preen at some point, how is it editing on it?

Here’s some new demos from Jon, the maker of the Motas 6:

I’ve got nothing to do with Motas but am really in love with this synth, The sound is very nice and there’s great depth for sound design possibilities.

I’ve been working on getting fully to grips with this thing so I can demo it, I was thinking I’d start off making a short demo which shows off some sounds that’ll give a good idea of it’s basic osc / filter / env character etc but I’m not someone who’d usually do this kind of thing so anyone have anything in particular that they’d like to hear from this?

I’m working on the demo now and as I’m doing so I’m constantly blown away by the range of sounds coming out of this thing! Was messing around with filter feedback yesterday and it sounds amazing and then there’s so much you can do to shape that with it’s various gain stages and saturation / distortion options.

I’ll probably do the first demo just showing the character of it’s various components (filters, osc, noise etc) as this was what made me most unsure about buying one of these in the first place; it was hard to tell what it’s basic character sounds like from the demos available at the time.

I made a couple more features requests to Jon the literally two days ago and he’s already got back to me on the first, letting me know that he’s figured it out and it’ll be in the next firmware update!

I’ll wait with mentioning the unconfirmed feature request but he’s confirmed this one:

It’s now going to be possible to set any lfo on the synth to track pitch giving the possibility of AM / FM aswell as a whole world of other audio rate effects! as expected, he said that as the lfo’s go beyond their normal Max speed, some aliasing of the lfo’s will occur especially with waves other than sine but that this in itself leads to very interesting sounds.

So anyone who was hoping for filter FM and sounds like that, it’s coming!

So far 3 / 4 of my features requests have made it onto the synth so I’m pretty confident the 4th one will make it too as Jon is a wizard!

For anyone considering the PRO 3 or anything like that, I really recommend you consider this too as I’m very happy I took the leap of faith with this thing

I am totally in love with this synth, and I’ve only had it for a few hours. It is, by far, the best monosynth I’ve ever used. 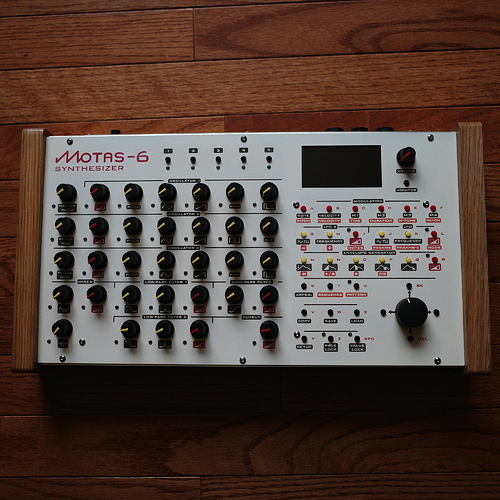 How do the knobs feel ?

Nice one! Happy that you love the synth as I’m completely in love with mine too

Be sure to keep an eye out for the next firmware update which should come next week, you’ll now have: Pitch synced audio rate lfo’s, The envelopes curve setting is no longer a 3 choice option but a gradient between Log and Exp going from -64 to +64 with the original Log and Exp settings being at -32 / +32 so the motas now goes way further into Log and Exp curves. Jon also said that there were some other things coming in this new firmware update that another user suggested so that’s very exciting.

Jon’s generally very happy to hear any suggestions you may have for improving the firmware as he wants to make this synth as good as possible so don’t hesitate to send him a message on the Motas FB or email. He’s so far implemented 4/4 of my feature requests!

I’d love 32/64 step patterns and a slide/glide parameter to do 303-ish type stuff with the sequencer.

Wow really seems like a wild synth… can you run all the filters at the same time with different routings and such? Have to say I am pretty attached to the flexibility of the sequencer on the pro2 and the ability to dial any modulation source amount + or - to a ton of destinations but this has so much individual modulation… pretty bonkers. Is there a sort of mod matrix for getting different parameters to interact or is it more each knob lives in it’s own world with it’s own modulations? Really interesting approach to a monosynth.

I’ve still not even come close to fully getting my head around this thing, I’ve not even touched the sequencer on it yet as I use my pyramid with it.

The filters can all be parallel or serial in any configuration, you can route the osc and noise separately, it’s all very flexible

You have 4 global lfo’s and 4 global which can be shared amongst all the parameters so you can use them. You also have 4 external modulation sources which can come from a CC / aftertouch / pitch bend or CV which can be assigned to any parameters you want and these along with note and velocity can all be assigned to a secondary parameter for every lfo / env on the synth, sorry if that’s not very clear lmao! You also have 2 sequencer lanes which you can use as a modulation source for all parameters and you have the vector morphing feature on top of this so you could set up 4 similar patches with varying modulation configurations and morph between them. All of this is also controllable via NRPN.

As well as the audio rate pitch tracked lfo’s and smoothly variable envelope curves in the next firmware update, Jon also mentioned that there was some other modulation features coming suggested by another user in the coming firmware update which should be available in the next week or so.

That patch vectoring demo was awesome. Reminds me of an analog version of the Lexicon Vortex.