I won’t say it looks interesting, because I don’t have any information. It does look blue. 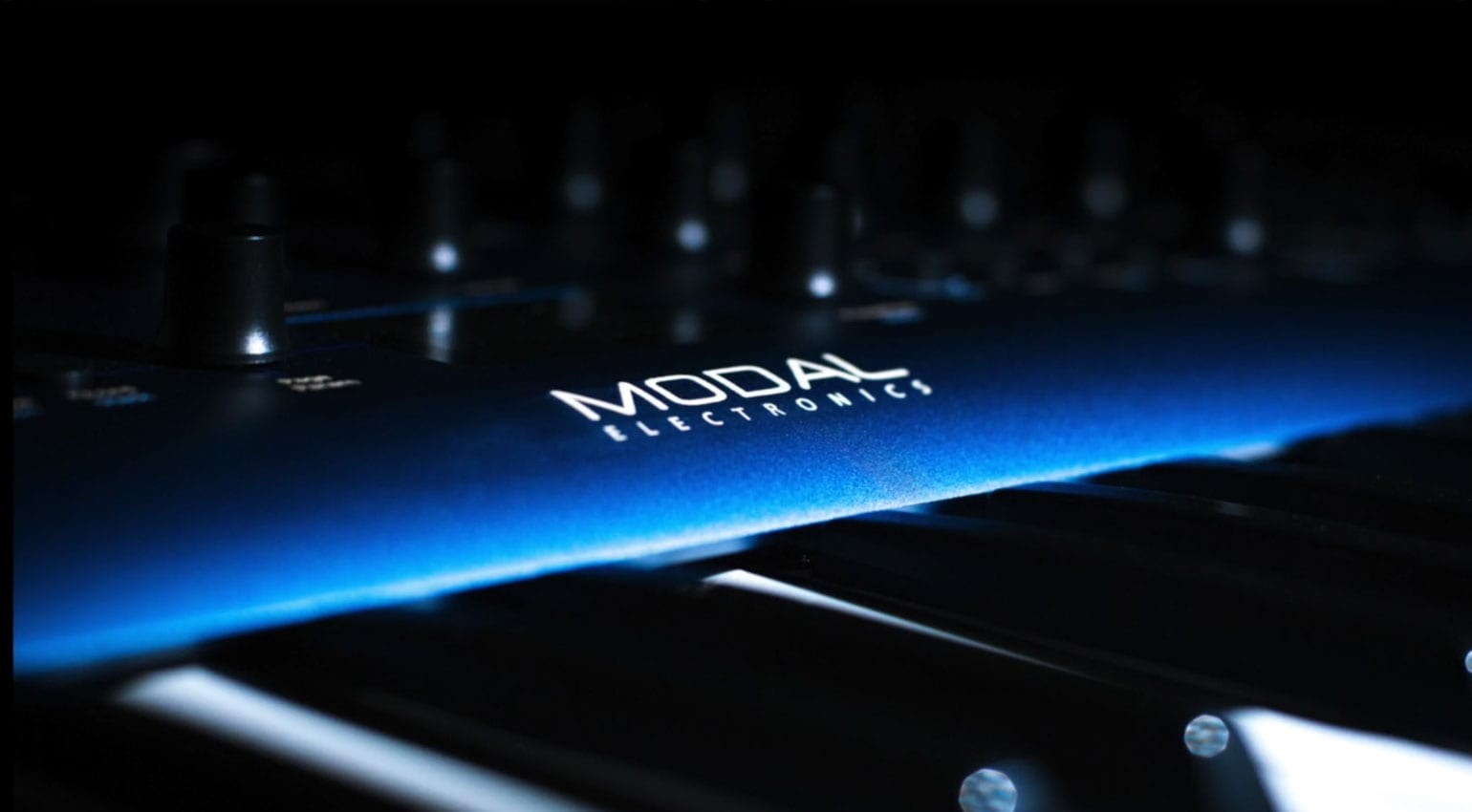 As part of virtual Synthfest 2020 Modal Electronics released a little video showing glimpses of their history and finished with a gorgeous shot of a mysterious blue synthesizer.

I’m not sure I buy the conclusion of the author that this will likely be an extension of the Argon range (what extension is left to be made?) – but time will tell.

Teased at Synthfest UK in this video:

It does look like the Argon, from that little bit in the photo. Maybe a little different direction withe Argon line? A trimmed down Mono synth, with some different, more aggressive filters? Or, maybe just a light refresh, with a paint job and a big firmware update?

Nothing in the teaser clip sounds distinctly “wavetable” to me @HoldMyBeer – although I am by my own admission quite bad at picking out synthesis techniques by ear, and having used the Argon, I also think it could be used to make similar sounds. I wonder if it’s perhaps a VA synth in the style of the Skulpt, though, or maybe an FM synth (some of the pads sound DX-y to me). All I can really say for certain is that it has a resonant filter.

I actually haven’t listened to it yet, I was just going off the photo. But you are right, it could very well be a grown up version of the Skulpt. I think the Skulpt sounded great, but never picked one up, because the interface looked so fiddly. And the Argon design would seems like it would be a good fit for that.

Same; I liked what I heard, but couldn’t imagine navigating the rat’s nest of controls.

Yeah, with all that angled text and whatnot. Just not a good design.

I got in on the early bird kickstarter for both the Skulpt and the Craft2. The Skulpt proved to be pretty easy to use if I’m honest, but I do think I was sensible in chosing the white version. The all-black looked nice cosmetically but it became too opaque to use. Weirdly, though the Craft2 proved to be much more difficult to use despite it not have off horizontal text and such like - but that was down to it having to many buttons combos and secondary functions. Neither are the most robust of machines but I’d never take the on the road and I don’t have any curious kids/cats/gerbils so it’s fine.

Modal’s history has certainly been a curious one.

From the start with, whatever your opinion was of them, super high end machines both analog and digital with the 002 and 008. And then the lurch to the bare circuit boards of the first Craft synth. And then moderating slightly to the middle with the Skulpt and especially the Argons.

I see at least two possible holes in their offerings, middle level analog — and they sure have the chops for that, and a digital one notch up from the Argon. I also like the suggestion above of something that solidifies the Skulpt design.

At least Modal got out from under financial doom, though i don’t imagine they’re flush with cash yet either.

Another question — is this one also a creation by Jackson Almond, or does Modal trot out another engineer as seems to be their past pattern. (I say this mostly in jest, i really expect this to be done by Jackson Almond. They had though at least three other very good engineers previous to Almond,)

Hi Jukka, Jackson, as one of our product marketing team, is often in videos we produce - but he is not one of the development engineering group. Products like Argon8, SKULPT, and CRAFTsynth 2.0 require many disciplines in hardware, firmware, application, and DSP engineering - no one person would be able to undertake ALL of these roles! Modal’s development team consists of a core group of eight engineers and many of these have been around since the original Modal 002 development.

There is a nice interview with Modal’s founder and CEO, Philip Taysom from Synthfest UK last weekend that also is worth watching: 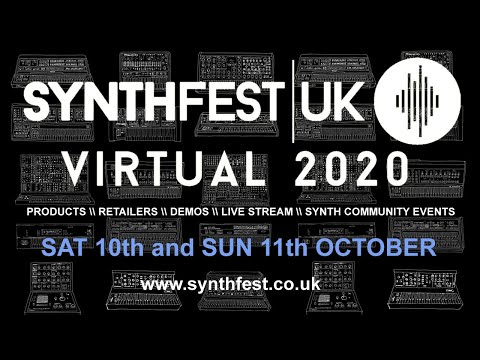 Thanks @ModalElectronics for the clarification.

For those familiar with Elektron, Jackson’s role is closer to Cenk’s.

Regarding this blue picture, I just saw it right now and it certainly has my interest!
A teaser like this is made to make people like me guess wildly at what it could be, and it’s working

It’s got me thinking…

Edit: After listening to the music in the teaser I hear a few instances of Argon8 (even the drums) so my guess is something multi-timbral. No idea if the teaser music is part of the hint, but that’s my guess

Could also be a special color limited anniversary edition.

I actually haven’t listened to it yet, I was just going off the photo. But you are right, it could very well be a grown up version of the Skulpt. I think the Skulpt sounded great, but never picked one up, because the interface looked so fiddly. And the Argon design would seems like it would be a good fit for that.

I bought one and immediately returned it. The sound was amazing but the build quality was awful. I was convinced I’d break it within a month of careful use.
That engine in a proper case with quality hardware would be awesome.

Usually these days I´d put my bets on a “black” -eerm sorry “stealth edition” but they´re alreday black. They did a fantastic job building the Argon, maybe this is a different synth engine in a similar case.

Hi Tom, what do you think was not ok with the built quality and what model did you try?

It was the Skulpt, I think I messaged you guys at the time about it (on FB maybe?).
It just felt really flimsy and plasticky - a lot of play in the knobs/connectors, and I assumed they were PCB mounted with no real support from the case? The on/off switch didn’t really seem to latch either as I remember.
The sound and architecture was awesome though - that in a proper enclosure (with 8 voices maybe?)

I get what you mean. With the benefits of portability in mind, there is always a certain compromise to make. However, the plastic chassis and the lid is comparably rugged from our point of view. But it also a question of the budget, a musician has available to spend. SKULPT has a lot to offer (it’s actually the most affordable MPE-compatible hardware synth), sounds fantastic and doesn’t need you to rob a bank.

I just want to let you know that Modal Electronics has probably lost a lot of customers with the decision to put poor quality knobs on their last devices (Skulpt, Argon, …). I’m one of them. When I heard the Skulpt for the first time, I was very impressed with the Sounds so I decided to buy one. Bought the synth, arrived home, unboxed the synth, put my fingers on the knobs, … , reboxed the synth and returned it to the store. I really wanted to love the synth but the FEEL wasn’t there. For me, it’s all about the Sound AND the Feel.

I do like the fact, though, that Modal Electronics took the time to bring their inputs into this Forum. I respect that a lot. I didn’t rule out having a Modal Electronics synth in my studio. I hope that the future devices will suit my needs.

I’m always interested in what Modal is doing. From the teaser picture, the layout looks identical to Argon. I would hope that this whole hype campaign doesn’t conclude with “We have Argon in blue now,” although that would be a good color for that instrument.

If the announcement was simply “We’re offering different colors for Argon, plus a huge firmware update which includes a whole slew of new features,” well that would be just fine.

I remember hearing that poly-chaining for Argon was just around the corner. Maybe this will be a 16-voice, multitimbral Argon.

Either way, it’s always great when synth makers continue to support and develop their own products.

No worries, ARGON8 will not change it’s colour.
Polychaing is already available for ARGON8 to expand the amount of voices and it works very well.

Seems to me that the layout is the same or at least similar but it will be a different type of synthesis for the blue synth. Can’t wait to see what it might be. FM maybe? Let’s wait and see