M:S Want to do tear down - to try pad modification

This is my first post. I want to ask if anybody has opened the M:S or has read somewhere a procedure or have see picture on how to do it. I want to open it just to see if there is a way to modify the pads in order to improve their sensitivity. I did this few years ago to my AKAI MPC and MPD. They both had manufacturing flaws. On the AKAI MPC I replaced the pads with new ones and on the MPD I tape modified the pads. Both now are are much better for finger drumming and jamming and I just want to see if there is possibility to do the same with M:S because I like the unit a lot but only have issue with the sensitivity of the pads.

I’ve been thinking of this as well. It’s even crossed my mind to 3D print new ones or purchasing a silicone tool to produce a sample pads. But that’s a lot of work.

Yeah something like that - 3D printing is also a good and affordable approach. To start with I was thinking of even more simple approach just to see it there is a gap between the rubber of the pad and the sensor underneath, and to fill the gap to see if the sensitivity and response will increase.

Let see if I can’t find any info online I suppose I will do it slowly my self.

Just use a pad controller or adjust to the pads as they are, can’t see this ending well with desired results. My 2 cents. Post your results if you modify it!

A guy on the Elektron Model:Samples FB group took his apart the other week to replace a dodgy FUNC button (part supplied to him by Elektron).

Here’s the instructions he posted that he said were given to him by Elektron. He posted photos too, but they’re not mine to share here. Note there’s a LOT of screws.

• Remove all encoder knobs. This can be a little bit tricky since they are quite tight. If you a have a guitar pick laying around, this can be used to heave the knob a little bit and then it will be easy to remove by hand.

• Remove the rubber feet under the unit.

• Remove the 5 screws to open the casing (one is located under the serial sticker).

• Carefully lift up the PCB.

• Put the new button rubber mat in place. Make sure the pads and FSR film is in the right place if it has moved, matted side of the film should be towards the PCB.

• Put everything back into the panel and fasten the screws.

• Put the bottom in place and fasten the screws, then put the rubber feet back.

Thanks very much phutyle !!
That was more or less exactly what I needed.

I will keep you updated in the coming weeks for the results.

Oh and if it’s not too much trouble. Pictures please!

I don’t have FB

Here’s photos of a Model:Samples being taken apart (to paint the enclosure): 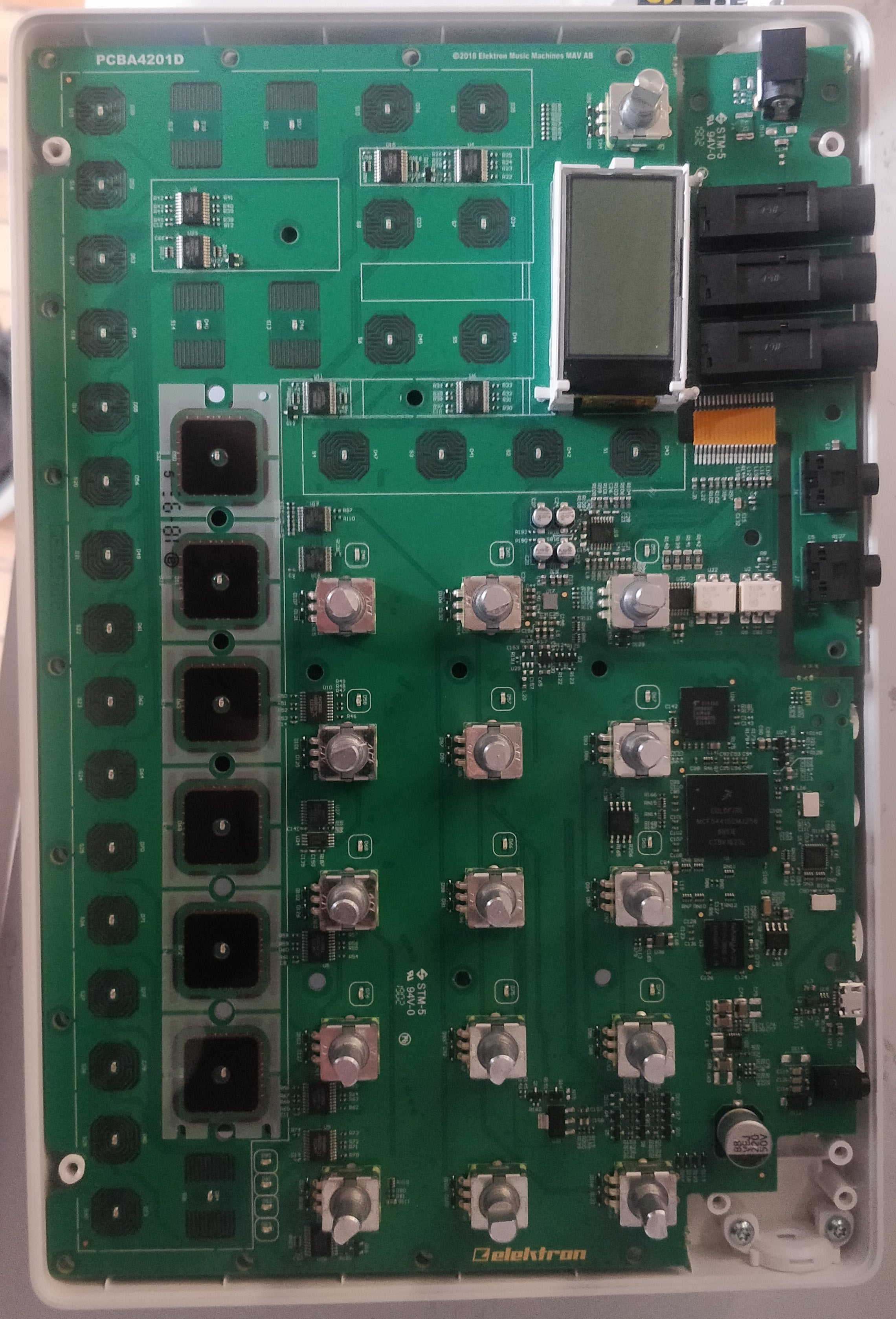 r/Model_Samples - Here are the pictures of the PCB. There might be repeat... 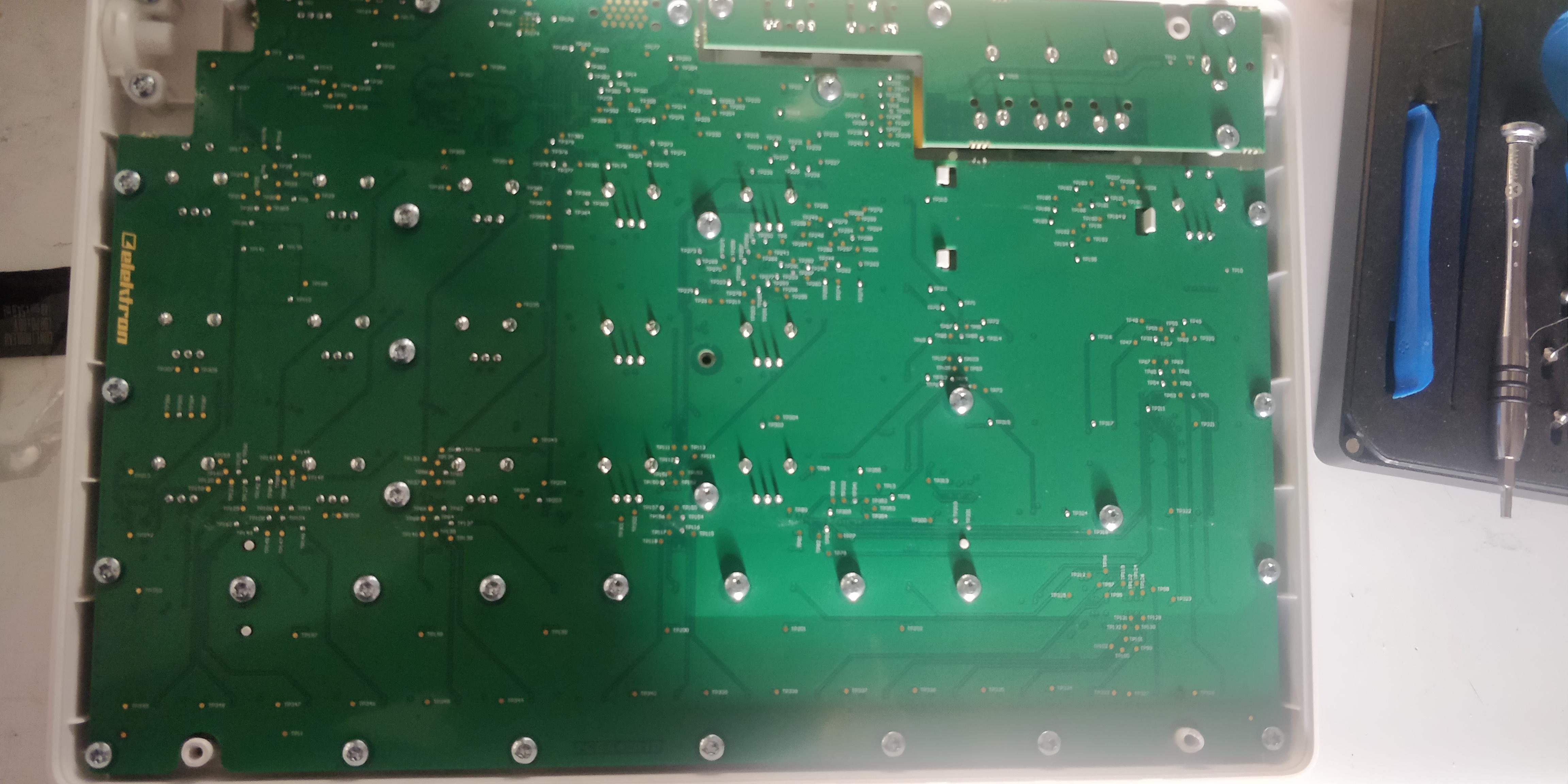 My little tip for removing the knobs/encoders: use a single piece of toilet paper, it gives you enough grip to pull them off by hand (pull straight up from the surface, don’t pull at an angle).

Any update on how this went?