Do any of you work with hardware loopers along with your other gear/instruments? Particularly using MIDI sync?

Over the years I’ve used quite a few and am looking at getting something new. Past loopers I’ve used that had decent to good MIDI sync are the Gibson Echoplex Digital Pro, Electro Harmonix 16 Second Delay Reissue, Damage Control Timeline, and maybe one or two others. The EDP by far was the best out of the bunch, but it is getting long in the tooth, and I’m not looking to buy something of that vintage.

By far, the LP-1 one stands out as the best in terms of features, but just wanted to see what other people had experienced with any/all of these.

Would consider an Octatrack, but overdubbing is a pretty huge feature for me as well as the immediacy that the guitar pedal format provides.

I know it’s not a pedal but the deluge looping is pretty bad ass. You can have a ton of overdubs which each records to their own track. So basically you can overdub as many times as you like and keep/mute/solo/delete each take. So much fun.

I use a Electro Harmonix 45000, for studio and live, midi synced, and overdubbing heavily. I use a midi pedal with it. To me it’s great, easy, flawless. I never tried the newer model (95000), but it’s probably even better.

Feel free to ask if you have any precise question about it.

I vote for the Pigtronix Infinity Looper because it packs in a lot of useful features, does it all well, it’s fun to use and it’s very quick in practice.

The only issue I had with it were some pops and crackles here and there, but I believe that was mostly due to clipping as a result of my negligence in setting up the proper gain-staging. In regards to that issue - the Boomerang III seems to handle it better. No strange pops or clips have ever come out of my Boomerang III. Not sure why that is.

Super-Long Edit: I just wanted to add that the Infinity looper somehow made overdubbing and un-doing easier. I don’t know it well enough yet, but the Boomerang seems more complicated for overdubbing and un-doing, maybe it’s because I don’t have the Sidecar (it’s pricey!). Also, I loved re-pitching with the Infinity and an expression pedal. It also re-pitches the audio when the tempo is changed. The Boomerang does not respond to tempo changes besides staying in sync, I suppose… and it has what seemed to be a more limited re-pitch functionality (when compared to Infinity), as well as a pretty limited but perhaps useful time-strech function which the Infinity does not feature.

The Infinity feels more modern and has received some interesting and useful firmware updates. I think the most recent update was about the beginning of 2019. The Boomerang seems longer in tooth in comparison, considering it hasn’t seen a firmware update for about 5 years now… but this may be due to the Infinity having a lot of issues that needed to be ironed out, yet some pretty cool features have been added along with that.

Finally, the Infinity records to a card (albeit installed within making it rather inaccessible), but that may be something to consider if having the original audio will be useful in your workflow.

I use two Rang III’s in my live rig, alongside several synths and drum machines… In my opinion, at least as far as live looping is concerned, they offer the most bang for the buck, and MIDI sync is rock solid. If you’re looking for loop storage though, they’d be useless. Otherwise, pound for dollar, they’re easily the most efficient and feature laden looper on the market.

What about Boss’ RC 202/505? They seem interesting, specially for hand operation

And the Boss RC30 as well. Cost-wise quite a bit more efficient than the ones mentioned here.

Yet, if money’s no issue, I’d go with the Boomerang 3 or the Boss RC300, which seems the most complete of them all, actually.

Had the Pigtronix Infinity but sold it for an iPad, foot controller and Quantiloop. My use case was around a live drummer with shifting tempos - Quantiloop can time stretch on the fly (i.e. use tap tempo to keep loops in sync) which a lot of hardware loopers find hard to do. It can also save loops and has comprehensive midi control. 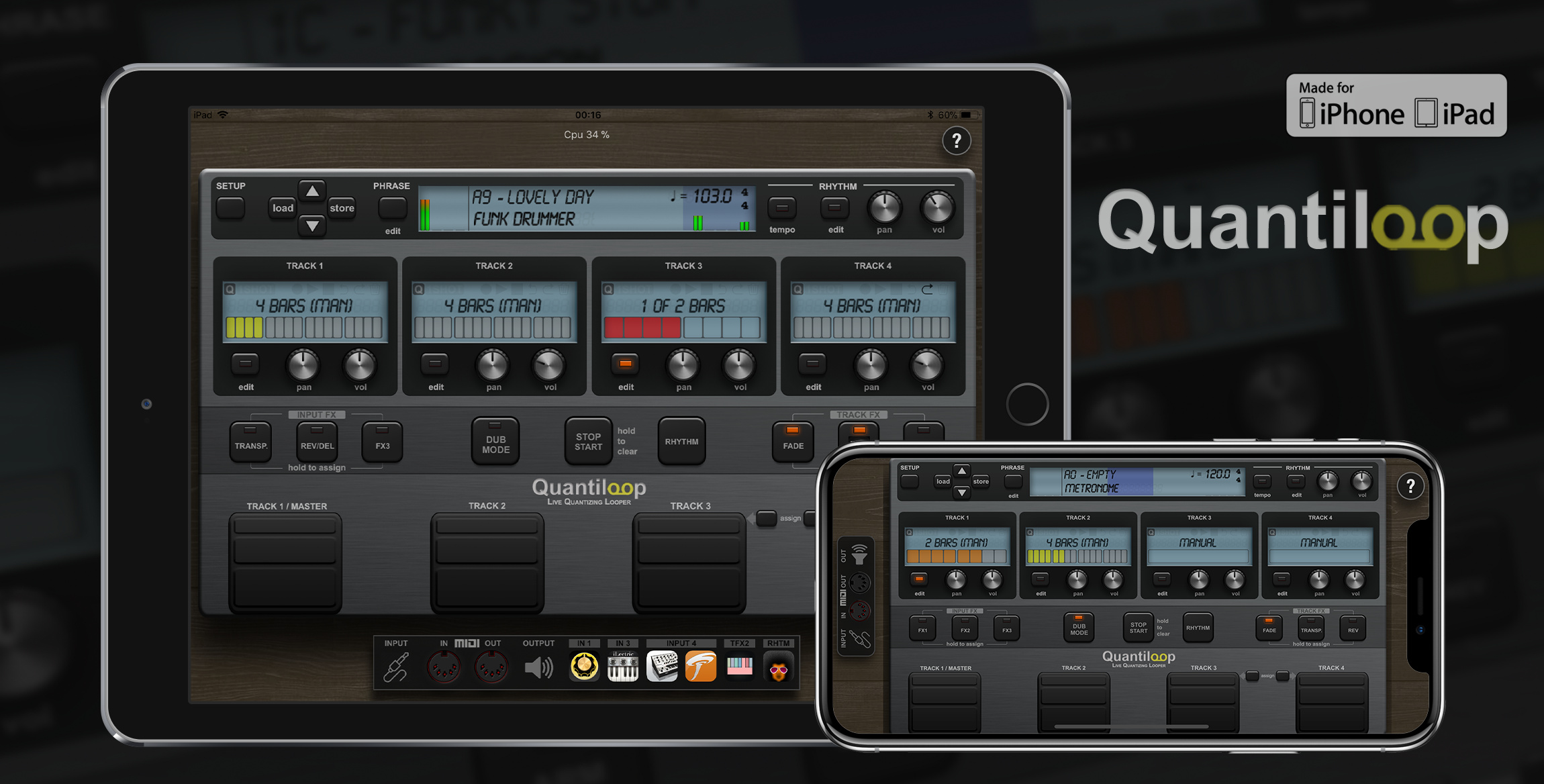 BUILT FOR LIVE PERFORMANCE Built for Live performance and hands free use, Quantiloop recreates the simplicity of a hardware loop pedal in an iOS app. Attach a MIDI foot controller and control it the...

I have quite some experience with the infinity, rc 505 and ditto x4

ditto x4: don’t do it! I love the looper, but the looper doesn’t love midi. my first worked perfectly and suddenly stopped syncing. at a gig! then it would decide when to sync or not by itself. I tried everything, but after searching online a lot of people seem to have unreliable ditto x4’s. I loked the looper so much that I bought another one 1 year later. new firmware, different problems… all midi sync related.

infinity: lovely looper! perfect sync. absolutely flawless. the only thing I liked less is that you have to select the track you want to record first. but great options. you need an aux switch for redo’s.

Boss 505: ugly ass spaceship, but I had a lot of fun with it. visual feedback is great on the looper. volume faders are worthless. 90% of the volume is in the first 10% of the fader. so it is a pain to adjust volumes quickly, you have to be very delicate. Midi sync is good. people say it doesn’t like to slave, but when you get all the configuration right it work perfectly. a lot of configuration though, because it can do a lot I don’t want or need…

from my days of trying to loop with the octatrack, I remember that the biggest problem is you can’t overdub when octatrack is slave, and when octatrack is master, it changes BPM while you’re playing (in lower bpm ranges). so when you’re playing at 70 bpm, and you record your first loopertrack, the octatrack jumps to 140 bpm. you could solve this by having a dummy master looper, but this wasn’t working well either, don’t remember what the problem there was.
I really wanted to use the octatrack and spend a week doing only that, but I gave up.

This, or just a Timefactor which is the same algo with more knobs. Only one layer but you can do loads of fun stuff with the buffer size, location and pitch, and it’s all midi controllable. Very tape-like. And I’m selling one

Just got one of these, and am just getting to know it. Is there a way to loop something you have going on another algorithm? Like let’s say, I have this crazy stuff going in with the tape delay… can I jump to the looper? I doubt it… maybe there’s a trick. RTFM right?

Just read the manual😮 on the looper. That was kinda a rtfm question. Not possible. But, what are you saying about tape like? Any tips? Thanx.

What type of realtime stuff can you do to the loop? One thing I loved about the EDP was multiplying, inserting, reversing etc. all while the loop is playing/overdubbing.

It seems like the new EHX loopers all are pretty static regarding messing with the loop. The one thing I really liked about the 16 Second Delay was its really funky Akai sounding timestretch. Extreme amounts got really cool and granular. Does the 45000 do anything like that?

Can you talk about repitching more? I read through both manuals for these, but how are extreme settings. Like I said about the EHX 16 SD, having some cool artifacts and character is kind of a plus, but if it just doesn’t work well/sounds bad that’d definitely be a negative.

Yeah, that Aeros looks very cool, especially for the size.

Can’t get behind the Headrush though. That thing is too enormous.

That sounds super awesome. I know I would not be able to deal with the whole iPad thing though. Just too many pieces of equipment to deal with, and ideally this would be easy to move around, plug into a patchbay, take up as little space as possible, etc.