Keep us posted with assembly pics too if possible

Plus, what’s your estimation of the space envelope (in particular could you have gone higher without fouling a PCB … i.e. is a 2x2 array of 1/4" TRS outlets a non starter) ?

Honestly I didn’t measure because I just assumed it wouldn’t fit, but It may be possible. It’s fairly tight in there - the control PCB rests ever so slightly above the MIDI jacks. Maybe staggering them in a zig-zag would provide the most plug clearance. The side-by-side approach is a little tight, but it was easy and I just wanted to get on with it.

Some people seem keen on a D-Sub connector instead of audio jacks, but the thought of milling out a clean hole for the D-Sub jack and then also having to make a project-specific cable/dongle to use it just seemed annoying down the line. I’d rather just use cables that I can use elsewhere or already have, and drilling circles is so much easier.

I still need to order the proper TRS jacks - I just used comparable Kobiconn jacks to test/measure. Chances are I’ll never use the outputs in stereo (I’ve yet to really do much with panning automation) but I might as well set it up proper if I’m doing it at all.

Actually, just reread your post and can say that 1/4" jacks are definitely out. You could get away with 2 side by side, but you’d have to cut the header pins off the main PCB that are situated in the space between the USB and power jacks. That’s a little too drastic for my preferences, so I just stuck with 3.5mm jacks

And so it ends 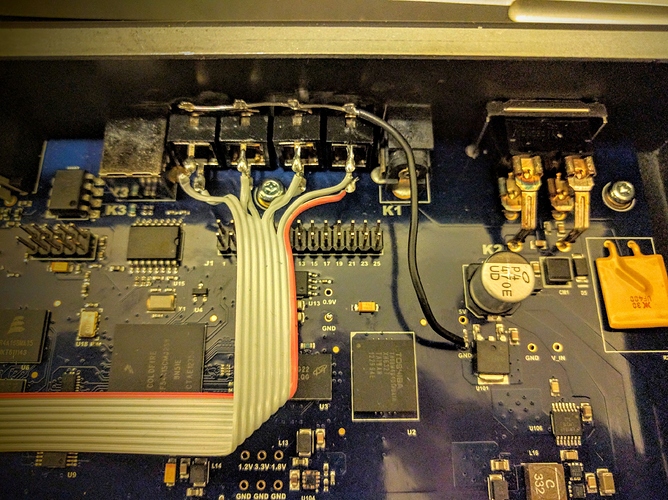 Wonderful to see this done, let us know how it sounds! Nice neat job too.

And so it ends

in the mail to you as we speak.

Without reading the rest of the thread, so have you “just” (and I use that word in the very loosest sense possible) tapped into the pcb and routed the four voices out seperately?

Is that pre/post fx or?

Pre FX, there’s no way to get them post FX, the FX are only on the stereo out.

By ‘tapped’, I mean soldered wires into the empty header footprint that already exists on the PCB. Elektron already did half the work for you!

Very nicely done! You sir are a True Pirate!

WOAH!
I gotta try this.
However, if I end up doing this it’ll make me wanna add a bigger mixer.

Now we just need to convince Elektron to make it so that the A4 input tracks can be sent to the FX independent of their through volume volume, essentially allowing the A4 to act as 100% wet FX loop for an external mixer!

I assume that using the Global / Routing page, and checking off “ROUTE TO MAIN” on each voice allows you to use the main outs as FX returns only, with all the voices only going through their individual voice outputs, 10 output/Analog Rytm style.

Not in front of my A4, but I remember the AK had this routing feature in the global section, and from the looks of the PDF manual, the A4 does too.

Yes, it does work this way. What I’d like is to be able to send other things from an external mixer to the A4’s FX and return just the 100% wet signal, essentially using the inputs and main stereo outputs as an aux send from the mixer.

that would be a lovely capability of the EXT in on the FX track! Adding EXT IN to the route to main menu should do it.
I suppose you could do that if you went through a voice / input OSC, but of course that costs a voice.

whoa think I’m going to need to do this

Pre FX, there’s no way to get them post FX, the FX are only on the stereo out.

By ‘tapped’, I mean soldered wires into the empty header footprint that already exists on the PCB. Elektron already did half the work for you!

Awesome stuff. I’d say you deserve another cookie but you’re already getting one, so, you know, just split that into four

So far all is working well, the only thing is that if you use a mono cable in an individual stereo output, it shorts one of the L/R channels out of the main mix. So the outputs could stand to be further buffered, but it works well enough for my uses so I’m just leaving it as-is.