How to send clock to a modular system?

First off, I have no business in modular, given my noob status. However, I’m getting, or 90% sure, I’m getting a Make Noise system cartesian. I don’t have enough pain and suffering in my life

So all I’m looking to do pretty much is
A. Be able to send patterns to the Cartesian (if I want, instead of using the on board sequencer (Rene’))
B. Send clock, start/stop from my Octatrack to the System Cartesian

I realize the OT does not have CV. My A4 is gone, so that’s out. The only other solution is getting a Kenton box, the solo MKII I think it’s called. I think that would solve that problem? What do you think?

I saw another post where someone used a rim shot on the queue output of the OT somehow. But there were not clear instructions and I assume I’d lose a track in order to do that.

Properly designed modules will “Trigger” to any sharp transient audio / click, so that’s why you can use a rimshot (or the Impulse machine in the Rytm) to trigger modules. You could even have a click track in your DAW go out to your eurorack.

kenton works fine, so does the roland sbx-1.
and there are some doepfer interfaces - but i don’t have any experience with those.

A cool trick is to send out a clock source via your headphone output to your clock input.
You take one of your track with a sample like pulse or trigger and then you cue this track to send to your headphones.

I’m currently using OT MIDI Out -> CV OCD (24 PPQN clock) -> Pamela’s New Workout to clock my modular via the octatrack. I’m also sending cv/gate signals out of the CV OCD using the octatrack sequencer to control some of my modules.

Looks great,how do you power this?

I’m using a One Spot power supply that I was previously using for guitar pedals. Most center negative barrel jack power supplies will work.

Don’t you have to use a web interface to change the parameters for that box? How is it to do that?

Yes. You use a web interface to edit what each of the outputs do commit it via sysex. It’s well documented and easy to setup granted you know what you want to do. I can post a screenshot of the config I use for the OT and explain it if you would like.

Here’s a quick rundown of how I currently have mine setup. 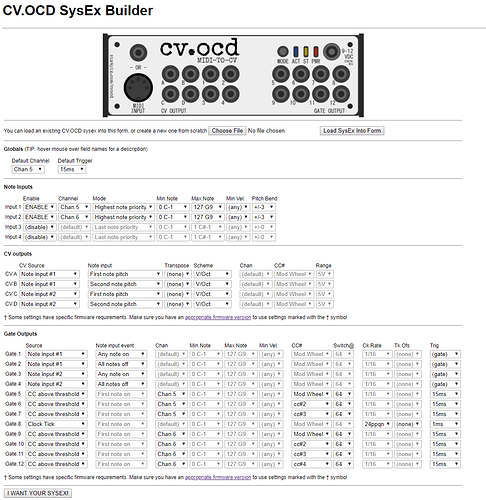 Basically I set mine up to run left to right with MIDI channel 5 controlling the top row and 6 on the bottom.

CV outs A/B are sending the first and second note pitches. You can set this up to have A/B/C/D send four pitch voltages from one midi channel to create chords, or send 4 independent mono sequences, but I chose to have two different sequences of two notes.

Gate 1 sends a gate when any note is triggered, while gate 2 only goes high when when no notes are active. It’s important to note that these can be set to triggers instead of gates, and the length can be specified.

The eight gate outputs on the right side can be set up more traditionally to trigger via a specified MIDI note but I’ve been experimenting with this setup recently. I’m mapping 5/6/7 to send a trigger when above the value 64 for the specified CC. I then send an LFO from the OT midi sequence that crosses the 64 line to send triggers to different modules.

Lastly, gate 8 is set to send a 24ppqn clock which my PNW receives and sends different clock divisions to all my other modules.

I didn’t go over the bottom section because it’s a mirror of the top besides having an extra CC for gate 12.

Let me know if I left anything out or you have any questions.

Lastly, gate 8 is set to send a 24ppqn clock which my PNW receives and sends different clock divisions to all my other modules.

You could checkout the erm multicclock sync sample…that uses 24ppqn.

Run that on a audio track sending out on cue output of OT.

I used to clock my modular via Ableton using essentially the same method with good results before I got the OCD.

It’s worth giving a try if you don’t want to spend any money, although I think all that goes out the window when you start buying modules.

I personally wouldn’t want to give up one of my tracks as a dedicated clock, but it could work well if you were just focused on sampling. I would love to own an actual multiclock though.

Hi everyone. Elektron Machinedrum SPS-1 UW MKII owner here. I’d consider my knowledge of its implementation mid level. I’ve recently decided to take the modular plunge and I’ve put together a small “hybrid system”. I was wondering if anyone has any experience trying to send clock from the Machinedrum out via midi into the Hexinverter Mutant brain then out to the Mutable Instruments Grids. I have my configuration where I can play any midi machine out on any channel to trigger my modules no problem. I’ve figured that out. But for creative purposes sometimes i like the variations and flexibility the Grids can give me, but i just can’t seem to figure out how to make my Machinedrum talk to its external clock reception via the Mutant Brain.

@iatroim do you find the 1ms pulse of the clock trigger to be long enough to trigger most modules? I have a similar setup and am trying to narrow down some unexpected behavior between my Mutant Brain, Pam’s, Steppy and Scales. Related to my clock signal.

Is there a standard or recommended pulse width for eurorack clock signals?

Ideally you’ll want to keep your trigger length short to avoid adding latency to your clock but you can generally get away with anything 5ms or shorter. I just experiment and find the shortest pulse I can get away with before I start seeing clock irregularities.

What does your clock signal path look like after it leaves the Mutant Brain?

Also, what kind of unexpected behavior are you seeing?

Just saw this. Did you work it out? I will often set up a couple of impulse machines (gn-im I think? I’m not at home to check) and use those to drive clocks and triggers in my modular. I don’t have a mutant brain, but I have used Yarns in the past with the MD midi stuff and it’s worked fine.

I have my Octatrack running into a midi quad thru, and then into the Mutant Brain. Mutant brain has two gate outs going to Pam’s to control the Run and Clock inputs. I was then using the outs on the Pam’s to control my Steppy and my Scales (trig in on the Scales).

I also have a Stop event set up on some of the Mutant Brain outs to trigger the reset on both my Steppy and Mimetic Digitalis.

My issue was, when I would Stop and then start up again, I would get a strange sound on step one. Or sometimes the sound would come when hitting stop… like my Scales was dropping by an octave or two.

I just tried setting up with clock coming directly out of MB, instead of routing through Pam’s. And then putting Pam’s into run/reset mode. So Pam’s never actually stops, but simply gets reset on Start.

This may have solved my issue, because I’m using a channel on Pam’s to offset Scales, using it as a make shift dynamic octave switch. And when I was also using Pam’s as an intermediary, to clock everything, I think there might be a micro second delay that it introduces in the chain.

Interesting to note that the default trigger length on the MB surgery, is 15ms. Wonder if that is too long?

TLDR, I may have solved it!

Kind of? I figured out that I had the Master/Slave clock option off on the Machinedrum so I corrected that. I can see the Yellow light in the top right corner flashing in tempo with what the clock speed is on the Machinedrum. Those two are talking. The problem is communication between the Brain and The Grids. I’m not sure what the setting should be on the Mutant Brain in the surgery. I’ve tried several options and just cant get it to match the BPM on Grids when I manually turn it up to 125 with the clock knob on Grids.