A typically sound was about 5-7 %
On my old Mac it could barely play a note with fx turned on. Possibly lower at 48k with low buffer though I got a few pops occasionally ( not due to cpu overhead which was odd)

So it’s basically a free virus B / C that is actually usable , very capable of making sample chains etc.

I’ve loaded the TI2 banks in too, along with a couple of aftermarket Psy soundpacks for TI2 and all seem to run without any issue.
Don’t have my TI2 desktop anymore so cannot make direct sound comparisons but to my ears they sound just as before. It’s great to have the Virus sound back! 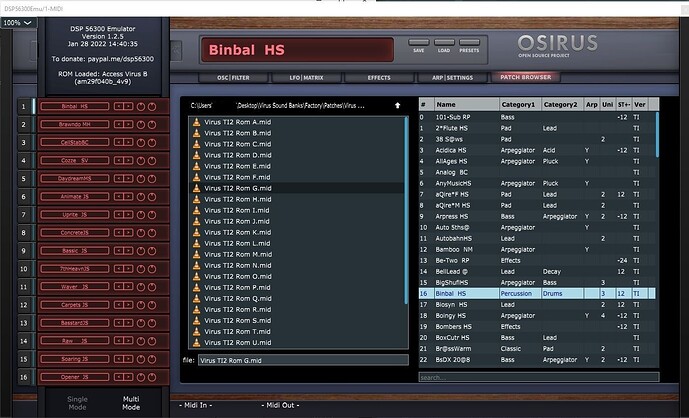 Wow, I’ve never seen this before! Pretty cool! Does anyone know how this compares to Viper overall? I guess in terms of usability, stability, CPU usage, etc since they’re very different approaches.

Viper had an update recently where it can natively import Virus patches and banks. The sound comparisons are very close. I was thinking about picking up a copy, but will take a look at this project as well.

Viper is a plug-in trying to replicate the virus

The emulator is the virus… same rom , waveforms etc etc. only difference is the hardware circuit dac / sound card hardware.

Correct, I understand the differences between the two. One is using the actual DSP code from the hardware ROM using a CPU emulator and the other is a traditional software emulation (recreation, imitation or whatever you want to call it). I was more wondering about the usability between the two.

I’ll just demo both myself, but seeing if anyone had already done so and had any insights to share.

Ran across this and sharing in case anyone is interested which addresses my question. Should have known to check YouTube first. 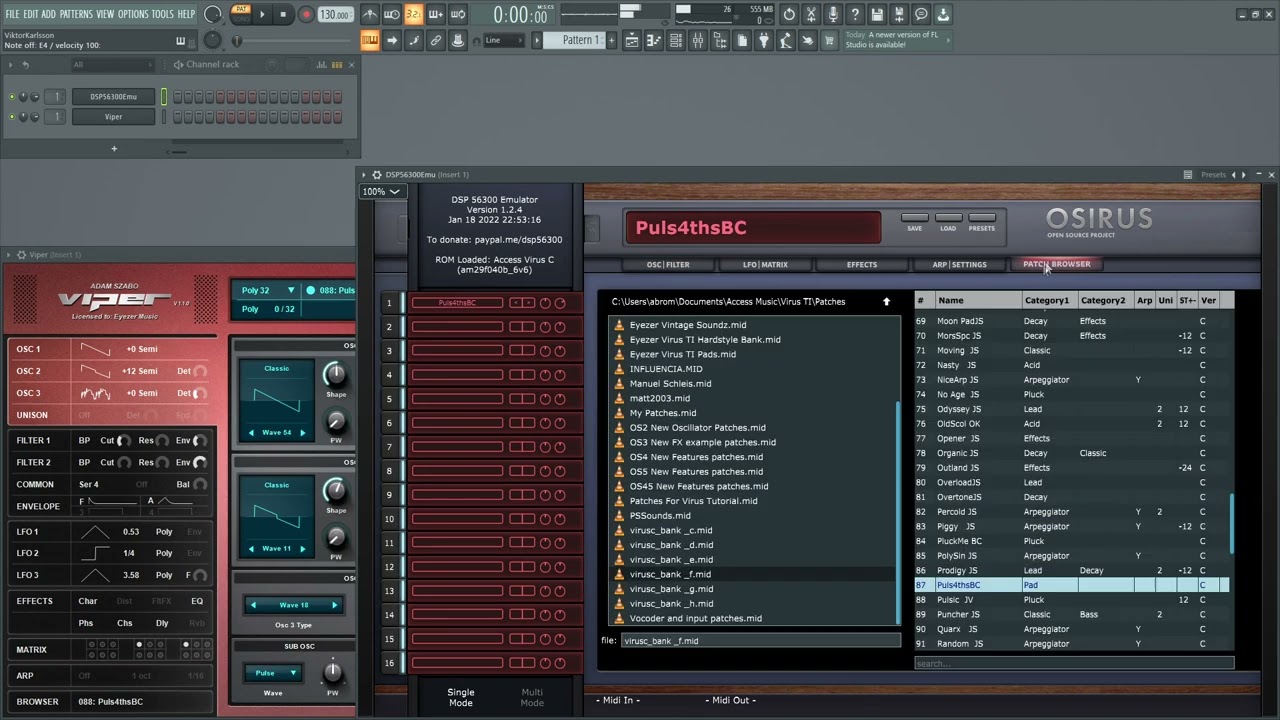 This actually works flawless. I use Tone2nanohost to make it standalone and sequencing it from digitone. 3% processor use on 96k 24 bit 64 buffer. Perfect!

I’m literally gob smacked by how good this thing is. Really quite unbelievable! They’re getting a donation from me for sure. It’s flawless so far on my PC in Bitwig and has loaded everything I’ve tried. Thankfully I saved everything from when I had one many years ago!

theres a good kawai K1 emulator out there too.

I just tried it and it works VERY well on my m1 Mac.
Even the GUI is very good and while not the most sexy, it’s very usable and commercial quality. It’s quite polished, you can double click to reset a knob, use the mouse wheel, or alt to fine tune etc …
I am very impressed, I will donate for sure!

But yes - very very usable on m1 , though to be fair everything should be.

I tried it on my HP Legion laptop with Ryzen 4800H cpu. If the laptop is plugged into the mains 56300 uses about 10 to 12% cpu in Ableton Live’s meter and runs without crackles. Running on battery alone the performance is terrible.

I am running a Mac Mini M1 and I get an error when opening a DAW saying it is not recognized and when I go into security, it will give me an option to accept it but it is stuck and won’t select.

I had read about a terminal script to put in but I haven’t got it to work?

Can someone please help me get this working? I am very interested in trying this out.

Thank you in advance!

Is this all legal? It looks like pirating hardware!
Surprised Behringer aren’t doing it commercially if its all above board!

Everything I use runs brilliantly on my Mac Mini M1. Light years ahead of my old PC and iMac 2017.

What the DSP56300 team is doing is perfectly legal. They’re simply writing a software emulation of a microprocessor that allows it to run code natively exactly as the original hardware does. A process that has been done for decades for many different types of CPU’s.

What’s questionable and more often than not illegal is the sharing of the ROM’s that are being utilized by the emulator. It’s copyright infringement to distribute that code, thus why the DSP56300 team doesn’t package it with the emulator and makes no mention of where to find it. You’re left on your own to decide to seek those materials out and utilize them.

Yeh, seems sensible but it’s a bit weird how freely this is spoken of (on all forums) yet if you were to even mention using pirated software you would probably be banned!

You’re not incorrect – it’s essentially the same thing. I can’t tell you why it’s generally not treated in the same light as ‘normal’ software piracy. We could try to get into all of the nuances, technicalities, “it hasn’t been manufactured in a decade”, “it’s preserving history” and blah blah… but in the end it’s still copyright infringement unless the original owner of the IP has open sourced it or expressly given consent to distribute it.

I think the important distinction here is that there’s no way to purchase a Virus B/C in a way in which Access see any money from it… so in this regard it’s more like a PlayStation emulator or downloading an old DOS game - it’s probably technically illegal, but there’s no legal route existing by which you could do it (except buying second hand, which doesn’t benefit the company who produced it either).

I guess the situation is a bit muddier because the Ti2 is still for sale which can do the same sounds, the emulation team have said they won’t release an emulator for Ti while it’s still on sale but you could argue people will use the emulator who might otherwise have bought a Ti (and will accept the missing features in exchange for free!).

I can see where you’re coming from. The key difference for me is that you can’t buy a Virus B/C (or software emulation) from Access, so they’re not really missing out on anything (in fact I have a real Indigo bought second hand in storage so I’m probably legally ok!).

But yeah, as the post above says, technically it’s not OK so it’s up to you as an individual if you feel comfortable with it!