Recently I had a conversation with a man who is in charge of mix’n’master (let’s call him NJ) of our incoming album (10+ songs). It is like a soft rock/alternative music style (with lot of electric guitar & acousitc guitars, bass guitar here and there) mixed with electronic beats and synth sounds. And I am the one responsible for these synths. I was using the Digitone heavily because I just love its sound. Since it’s really versatile I could use it almost in every situation. For me, it was really perfect device for our music. That’s my intro.

Now, what’s an issue? When NJ heard these synths while working on our tracks he stopped for a while like something is not quite right. He said that “it sounds like these synth records are too narrow. Like the panning/stereo spectrum is not very wide. And I am talking almost about all of them, it is everywhere.” I did not hear much of an issue there myself but I am far from being professional in sound design and stuff. According to him this can be a problem, since typically things like lead vocals occupy the middle of stereo field and synthesis voices should be much wider. Should not be there just where the singing is. He thinks “I feel like this sound is something of a fake. Especially pad sounds should occupy much wider space.”

To be honest it hurt cause I really love the sound. I am really not an expert in this area at all, but there must be something wrong with
A) my recording process (I recorded almost everything with OB, but when I compared these recordings and some sound I captured through DN audio outs I could not hear much difference)
B) with DN sounds in general (I hope A or some other letter is true)

That’s why I turn to you, dear Elektronauts, people who are using the DN much more often and maybe can say something. Do you think DN sounds are of a high quality? Have you ever dealt with issues like this using DN?

Thank you for any advices and shared experiences.

The only thing making DN stereo are the fx/ the panning.
I don’t have a DN but what i do with DT: use 2 tracks, pan one hard left and one hard right, and than change one of the sounds (pitch, microtiming, lfo phase, filter freq) I get some nice stereo width that way.

Just put Ozone Imager (or a similar plugin) on your Digitone recordings and adjust the stereo width. There, I saved you the costs of a mixer/masterer who doesn’t think this ‘problem’ is easily fixed

Well the Digitone can be as wide or narrow as you like in the stereo field.

It feels a bit like this NJ chap is being a bit of a knob. If he thinks there’s a problem, he could easily talk you though the solution, as this is all part of the mixing process. He should be working with you to help you realise the tracks’ full potential, and dismissing things for being “too narrow” doesn’t sound very helpful.

Do you think DN sounds are of a high quality? Have you ever dealt with issues like this using DN?

Dont conflate ‘high quality’ with your sound man’s preference for panning. Totally not the same thing.

‘Not wide enough’ is subjective. Totally mix dependent. Think of all the great records done in mono… no one ever says, huh, its not wide enough.

You can pan your synth voices inside DN, very easy. Have you got the pre mix vocal/guitar/drums etc tracks available to work with?

If so, set alll of those to centre, and pan Every thing your DN does accordingly. If you want to be pedantic, go hard pan LR.

Chorus and Unison mode are really useful too.
Communicate with the other band members, ask them what they want. Where the band wants their sounds. That includes you.

But, most important of all…

A mix/master engineer has no business at all passing judgment on the material presented to to them. Their job is to mix it, and master it. Thats it. They are not paid to have an opinion, they are paid for objectivity.

Don’t do this, those plugins do more damage than good

If you say so. They work for me!

The Digitone doesn’t really need em though, my post was more about that there are many easy ways to fix this supposed narrowness.

My favorite stereo widening plugins are M-stereo spread (Melda) and Wider. Both work well with mono compatibility. In my opinion, for many sounds, it is better to record synths mono, then add stereo later. If you do a lot of processing/ resampling in the computer, the stereo can cause problems. Especially unison spreading. Stereo spread Supersaws for example can really fall apart when you effect/resample them. And they mess up mono-compatibility. So, In my opinion, for a lot of sounds (like basses and leads), it is better to add stereo at the end. Of course everyone has their own ways. Just my 2 cents on the matter…

if he’s in charge of mixing this album, surely he has the ability (and responsibility…) to deal with questions like the panning/width of its elements?

Sounds like dude is a bit narrow-minded and has the idea that ‘synths are for pads and pads are always wide-panned and in the background’. He might not understand that they’re more than a background element. You need to have a chat about it.

something wrong with
A) my recording process

Sure, here’s one pad:
https://drive.google.com/drive/folders/1hjA8G8DYho7mVJpNC_wHf2v8rntKDa9h?usp=share_link

First of all. Yes he has that responsibility and he did deal with that. He used some tools to spread it to the sides…

And he is very nice, I am sorry if I depicted him as some kind of knob…

The thing is more about me and my thinking now: “ok, if this is the DN issue then what? Should I do something to spread it everytime I want to use the DN? What about live sessions and so?” And I am very glad for all your opinions and points. It is good to hear thoughts of other DN users!

And when I am listening to what you are saying… it looks like it’s more about some subjective preference than about an actual issue with the sound itself.

This. Wider is awesome, and really helped getting my mixes cleaner, by adding space in the stereo field. And it’s free !

looks like it’s more about some subjective preference than about an actual issue with the sound itself.

Correct. There’s bugger all wrong with the DN and the way it sounds, or what you can get out of it.

If the mix/master engineer is part of the band, then he totally has a right to bring opinions to the table. If he isnt, then yeah… as I mentioned before. Not his place.

However, you can also learn something. If someone says it sounds a bit narrow, then maybe its worth working on your DN panning, and see if that improves the over all sound of the entire track. Maybe it will make a difference, maybe it wont.

This kind of stuff should be a co-operative between all band members.

dude is a bit narrow-minded

oh wow that sucks.
most electronic instruments are mono, including all the famous synths and electric guitars.
and they only become stereo through editing them post factum.

my theory on why your sound guy said that is - you already had internal FX from Digitone on your recordings, which means its going to be more work for them to fit it inside the mix properly.

I think internal FX sound amazing on the Digitone, but if you are planning to use a lot of instruments, its better to add FX after you combine all of them together.

So dont fear, DN sounds as wide as any other instrument, its just for that specific usecase, the FX you dialed in may sound good and wide on its own, but for multi instrument piece youd have to push it even further, which can be difficult to guess during source recording.

P.S. i assume that you used internal DN effects like chorus, reverb and delay because you havent specified that you didnt, and many presets come with that enabled by default.

EDIT: I just gave example you gave a listen, so yeah, dude got groggy cause souds were already under FX, so its more work for him

EDIT EDIT: ok you also had dry signal there… which is how it should be done if you are recording separate from the band. If you also provided dry files to the sound guy and he was still complaining about it not being wide, then theres no excuse, its his skill issue.

I think the Digitone can be very wide. You can pan as much as you want, the unison spread is wide, and so is that stereo chorus.

I have the inverse problem as the OP here… If anything, I find myself overdoing stereo width because I love that wide chorus and often go nuts p-locking pan on each step. Width isn’t always easy to mix, so I’ve been trying to do it less and less.

Hahaha I see what you did there!

have you tried unison?

this is an example stereo content from a pad running through overbridge, no effects or panning applied at all, just unison at 3 with 3 voices locked: 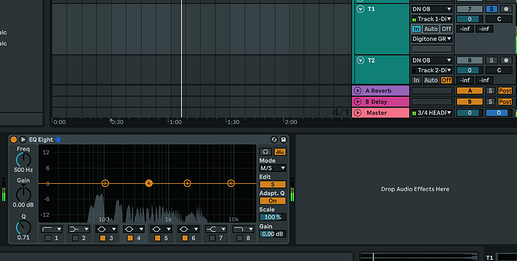 combine it with some chorus or short stereo delay and you have very very wide sounds. of course there are plenty other tricks to get a sound to be wide but imo just using the unison can be very wide