Above is a link to the video showing how to set it up.

I’ve tried this only with the Model:Samples but it might work with any external sequencer. This only works when the Digitakt is being sequenced externally, so any sequencer might work. I’m going to try the Octatrack next. If anyone tries it with other sequencers please confirm!

hmm… you probably could do this with the midi loop back also by having each midi track control a digitakt channel (with an instability risk). Very neat trick!

Not sure if it will ever make it into my workflow, generally I will just use another pattern and set the pattern change to a low number so I can do that sort of momentary stuff, and with that method you can also change the FX settings do sort of quasi transpositions with whatever is caught in the delay line. It does always change on beat while your method lets you do more of a unquantized live playing of them which seems cool.

The sequences coming from the Model:Samples (or possibly any external sequencer) are independent from the patterns on the Digitakt so there is that flexibility.
You can have 64 different scenes for a single pattern, and since there’s 128 patterns in a project, each project can have 8,192 different scenes. Switching to a new pattern on Digitakt brings up 64 fresh scenes, while staying on the same sequencer pattern from the external sequencer. This means the pattern can also be changed without altering the scenes, unless program change is turned on so there is that option also.

With that method when you change back to a new pattern does the pattern start from its start point? Like if I have pattern change to 1 step will it start the new pattern off beat of on beat? I always wanted one I could change the pattern but have it stay on the same step of the pattern.

Thanks for sharing this idea. I especially like it with the way you’re playing with the layers as you go. Very dope

This great, love it! I tried with it with Model:Cycles and works just the same

Can’t wait to play with it some more

wow, this thing is crazy. I dont really understand why it works in all the tracks when the locks are only being pressed in one track. I dont have a model samples and was wondering if it would work in a computer… maybe i try this later.

I know, this blows my mind and has changed the way I play. I’ve already contacted Elektron and asked that they not change this functionality. They said they leave bugs alone if they are being used to an advantage, and don’t get in the way of anything else. I think maybe the more people know about this the better!

Oh my, since I have both M:S and Digitakt and actually maybe too much gear, I was (only) starting to consider to let the M:S go. Now that I have seen this, I just might buy another Digitakt.

So I can us one as a regular DT and use the second DT in a separate ‘permanent’ setup.

MAN… this is huge! Probably the sickest Easter egg found in the Digitakt! Thank you so much for sharing this!

Just tried it out with an OP-Z sequencing the Digitakt. Works a treat!! What an amazing technique - thanks for sharing it

Edit - the param locks still seem to work even though I get the memory-full warning…are there any repercussions for doing this?? 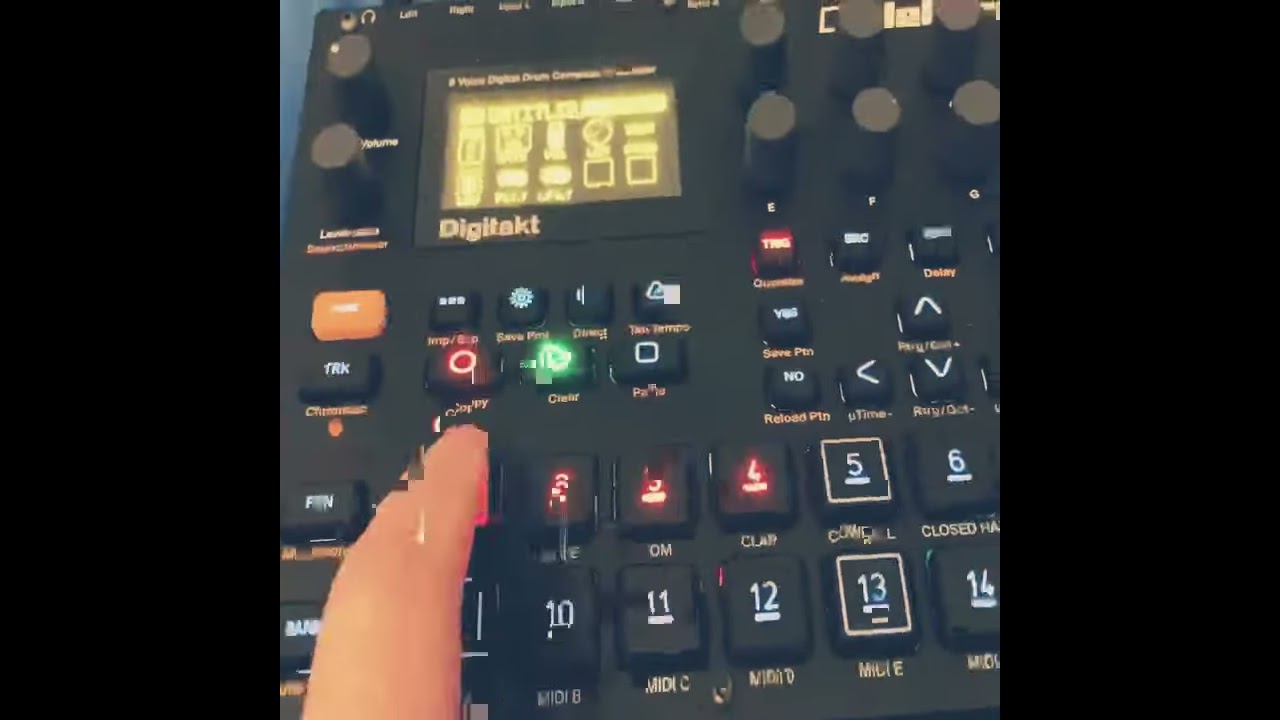 This is amazing!!! I have a M:C and a DT and can’t wait to try this! In theory it would even be possible to affect the scene, pulling of a filter for example, and then hit “Reload Ptn” to get the scene back to its original state! What a great trick!!!

Also works on the AK (and I guess on other Elektrons as well). I can hold any trigless trig that has p-locks and it will temporarily ‘p-lock’ incoming notes.

It might also work when the AK is sequenced from it’s own sequencer, but I haven’t done this for quite some time, so maybe I’m wrong on this one…

Does it plock everything across tracks that also a plock on the same step?

Yes it locks all tracks together, you just have to lock the track parameters while on that track, but then you can affect the scene from any track by pressing the same trig on the sequencer.

@Sponge thanks! Yeah I watched the video, it’s super cool

I actually meant to direct that question at @Schnork… but for either of you… does this also apply to plocks that are set on the MIDI channels?

I just tried the same setup for the midi channels instead of audio channels, sending midi ccs from DT to Typhon, and it works exactly the same. Midi scenes are also possible. The ccs changed just like the parameters of the audio tracks! I haven’t tested it deeply so I don’t know if there are limits, but it does work!
EDIT: Midi tracks and audio tracks share the same trigs so when you hold them down, they will activate the corresponding audio track scenes as well. This works the same way when an audio track is selected. It will trigger the midi scenes. They’re all part of the same scene. And since the Digitakt has 8 midi tracks, then 8 pages of midi assigned midi cc messages can all be included in a scene that controls the parameters of external gear. My Typhon now has scenes. And the 72 plock limit doesn’t seem to have any effect for midi tracks either, despite the “p lock memory full” message on the screen. Just ignore it and keep creating scenes.

yeah I couldn’t figure out if I just wasn’t noticing the p locks elsewhere being disabled or not.
What usually happens when you exceed plock memory limit of 72? I’ve never reached it in “normal” operation…
Gotta try the midi scenes this evening… it’s so much fun!