Atlas, XO, other sample managers - your favs and why pls

Software deals on both Atlas 2 and XO got me thinking about getting a sample manager.

I’ve checked out some vids and some comments on both - but I’d like to hear your take on them or others. Why you like one vs another, or even if you feel sample managers are maybe not that useful.

Smart bunch here, so curious to hear your thoughts!

I got XO on a deal a while back and really like it.

I might grab Atlas during this sale just because it’ll work with 16 samples and export MPC programs, whereas XO is 8 tracks/samples per program, still really good though.

I see a lot of crossover between the two platforms…

I’m trying to absorb info to see/understand what the strength and weaknesses of each are… before the sales run out - haha.

I own Atlas and I helped with the beta for V2. I am also trialling XO during the sale.

Atlas arguably has fewer features although it works perfectly well for what it does, and at $49 it’s a perfectly decent one-shot drum machine. The sample map is less sophisticated than XO which has extra features for filtering the map by type (kick, snare etc) and other characteristics like length. It has extra features for intelligently swapping sounds and finding new ones as well as for experimenting with changes to patterns.

To be honest, I basically bought Atlas because XO didn’t run well on my old machine whereas it now runs great on my new M1 Mac.

What I will say is this - the Atlas developer was very receptive to my input during the beta and he’s a nice guy. It’s in active development so you can expect new features. People generally seem to suggest that XLN aren’t receptive to feature requests and that the product is what it is with little or no new features since release. This may well be true as Addictive Drums looks identical to when I last looked at it a couple of years ago, although I haven’t checked every detail carefully.

I reckon at half price they are both decent tools that will unlock value from the massive and unwieldy drum sample libraries many of us own. Personally, having had a few days with XO I suspect I’ll buy it at the discount price. It has some minor shortcomings (mainly with the fairly basic sequencer) but it does what it does very well and it’s fun to use and encourages exploration.

Does XO fair any better than Atlas at sorting out non-percussive sounds?

I understand that’s not the focus of either of these, but if one did have an edge there that would be good to note, for me.

Actually, yes it does. It has more categories of sounds and you can move a slider called “druminess” to filter for more or less drum-like sounds. I tried it today and when I filter for less “druminess” I ended up with lots of synth notes, bass sounds, zaps and stuff like that.

https://www.sononym.net/ also has clever categorisation and covers leads, bass, pads etc but in practise it’s more of a utility for curating samples rather than a creative tool to make music. Not a criticism, just an observation. It may be just what you’re looking for if you’re happy with your existing drum sequencers and samplers.

I’m really enjoying XO. It’s fun and that’s a big one for me!

Whoa - Sononym looks really interesting! Hadn’t heard of it before… Thanks!

Now, if they’ll just discount their stuff like everyone else, I can more easily rationalize the purchase - haha.

Spent about an hour today testing Atlas and XO. Both are really fast ways to navigate my sample library and get a drum set up and running. I think XO is a bit better at finding samples. Both are competent sampler drum machines in their own right, offer multiple outputs, and will let me export midi or samples to my daw/other drum machine of my choice (which is good because I have and have been learning Speedrum for the past few months).

Thankfully, I have another week to demo both and see what’s what. So far, I’d say I could use Atlas by itself, but not XO because Atlas will allow me to pass in MIDI from FL studio and apply randomization to that, but XO will only allow for basic swing and only if I use the built in sequencer. Neither allows layers that I set up with round robins or velocity layers on a single pad, a-la FPC or Speedrum, however Atlas lets me drag and drop samples to speedrum easily enough. XO I haven’t figured that out yet as it wants to render everything to a folder first and then bring that back in for some reason.

Oh also, seriously who is making a paid drum sampler in 2021 that doesn’t let me reverse the sample on a pad XLN? Speedrum and Atlas are both cheaper and have this figured out.

so where are the Sononym cats at, it ain’t a party til it’s a party?

I have both Atlas 2 and XO but much prefer Atlas in almost every way.

XO was definitely better than Atlas 1 imo but Atlas 2 is much better for me.

Drum kits: I love drum kits Atlas produces for me. Way more interesting and usable than XO. This will be personal for you.

Randomise both drum kits and sequencer: I get the best loops out of this, absolutely love it and really inspiring.

UI: just find this easier and more fluid than XO

XO could have been updated many times over the years, but they choose to ignore user requests and do nothing. The Atlas dev is definitely more active

You can reverse samples in XO

@jb I figured out sample reverse, took another look to see it. I think XO’s built in sample editor is a bit faster and more intuitive, and I like that you get separate highpass and lowpass filters in XO versus Atlas you just get a single filter. So within the plugin XO wins, but so far Atlas wins for better integrating with my existing workflow in FL Studio.

Ultimately it comes back to just swing in XO versus velocity, pan, filter, pitch, AND time randomization per pad in Atlas. Just setting that randomization to get a groove to gel versus going through FL studio’s piano roll and randomizing each of those parameters for each drum in MIDI is a huge timesaver for me (it’s why I bought Speedrum). And for all XO can offer, it’s a huge step backwards in how I have to deal with drum MIDI to get the results I’m after. I think I’m going to go with Atlas.

I’m reading the replies with a lot of interest. I’m probably going to try test out both XO and Atlas but, man, that takes time I don’t have much of these days (and that’s why reading the comments here is helpful).

The randomization aspect of Atlas sounds pretty compelling all on its own, actually. Like others around here I imagine, I’m now pretty much conditioned to almost immediately pounce to see if whatever I’m considering has some sort of randomizing features (or better yet, conditional stuff! Ha).

And @captain8, I’m with you - gotta get a Sononym shake out going! Step one, of course: trot over to YT and see what’s there…

So much choice, so little time!

The randomization aspect of Atlas sounds pretty compelling all on its own, actually. Like others around here I imagine, I’m now pretty much conditioned to almost immediately pounce to see if whatever I’m considering has some sort of randomizing features (or better yet, conditional stuff! Ha).

XO also has randomisation features, you can scroll through similar samples and also randomise that list of samples. You can randomise entire kits and lock the stuff you don’t want to change. I think Atlas has this too. I know it’s a boring answer but they really do have an awful lot of crossover, however the approach and UX is different enough to warrant trying both.

So much choice, so little time!

No doubt, in terms of software we probably have too many choices! Option paralysis! 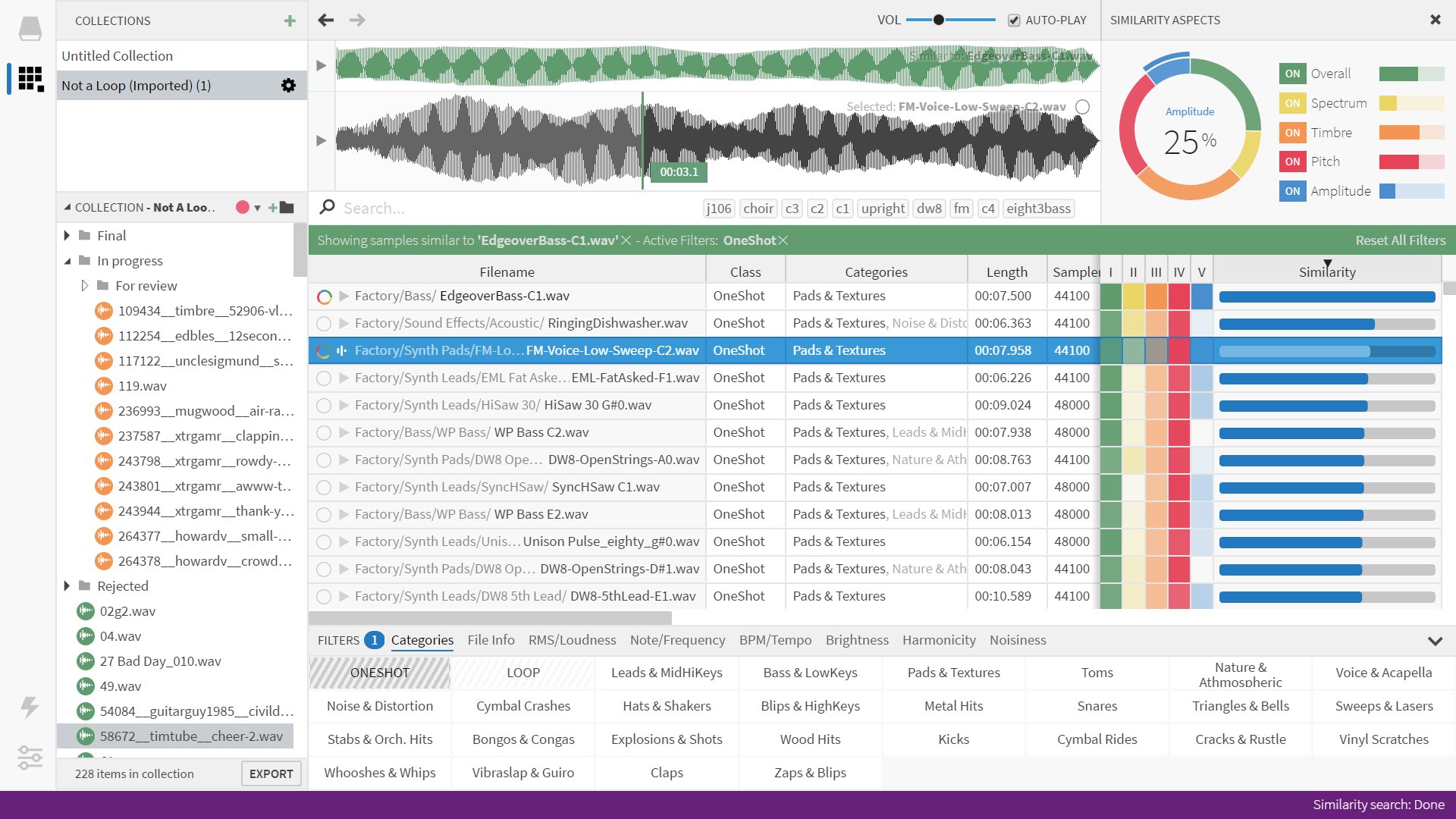 Sononym is an innovative sample browser for Windows, MacOS and Linux.

Another contender on sale

I find XO is missing out a lot of revenue by not offering / selling lots of samples / drum patterns packs — is there even a way to share them if I wanted? No idea… there are some nice presets though … could be more. An active community sharing their presets would be terrific.

Just got Atlas after watching a few vids. This will probably be my only software purchase this sale. Inspiration is at an all time low with no music made for months but I do recognize just how useful it is if you have thousands of sounds in different folders.
I used to do a similar thing Atlas can do in Reason where i would program a sequence in a drum machine and load different kits until i got something cool, so this will be like that on steroids

Check out Ample for mac. Not as fancy as XO, but free and very useful for sample management.