Which would you choose for something that can cover a wide variety of pads, arp and pluck type sounds. From what I have read the korg is much better built but the freak can get into wild territory.

I do own the digitone and I am trying to get better at it. maybe I’m just not digging deep enough. I’m not looking to get rid of it, because I am getting some good stuff out of it but I have to put a good bit of time to get what I want. it’s not as immediate when I just want to dial in my own pad or pluck sound and just jam.

I guess the good thing is I have lots of time to research and get input because my next purchase is probably 6 months away haha.

Anyone have one or both? Thoughts?

The freak is paraphonic so maybe not so good for pads. Not a lot of modulation options for the mini unless you use cv. I think modal’s argon sounds better than both tho. Just my taste tho. 8 voice too

id probably go XD as its got fx built in.

though if you bought microfreak 2nd hand you’d probably get your money back.

I have both and they are extremely different of course but for what you are describing you want you should probably go for the XD. The built in FX make for a bigger playground.
I really like them both and you can definitely easily create some wonderful and wacky sounds on the Microfreak as it is so versatile and the mod matrix is brilliant but then if you want pads you’re gonna want to process the sound a bit further with FX.
Even though they are both immediate I prefer creating sounds on the Microfreak as it’s extremely well thought out. It’s something you can learn to use and it becomes second nature very quickly.
The XD on the other hand has some buried and more complex functionality.
Soundwise the I find the XD is quite beautiful and very rich whereas the Microfreak is kind of dirty, gnarly and a bit noisy - some of it’s synth engines remind me of the OP-1.

I had both.What i loved about the Mini was the 3rd Oscillator and many of the additional Osc and FX.Did not like the filter very much,WAY better in the freak imo.

Sold both.Mini to fund Elektron gear and the freak mainly because the display is (although i like oleds) really too small,It’s the smallest oled on a synth i know and while the display on the Mini has a perfect size i think Monologue display size is minimum.And Arturia is still smaller.My eyes are not THAT bad but even with glasses it was exhausting to work with,Don’t underestimate this,with both synths you’ll find yourself a lot of times editing via display if you want to go beyond standard stuff.

Sequencer in the Mini is ace but only 16 steps (Korg,i’ll never forgive u this one).

On the freak up to 64 steps but much less fun and way less intuitiv than Korg (imo).

don’t know about the Korg, but I recently got a used MF and it’s a lot of fun to play with. It makes some pretty cool sounds once you start playing. I like the touch control keybed more than i thought i would. Bonus is that its super light and powers off a battery pack so its portable as heck. Honestly, even for the retail price, it’s totally worth it.

I eventually I plan to get the hydrasynth for more complex (8 voice) sounds, but until then the MF is producing some nice chords for me. It does do some nice bass duty too, but I have a Grandmother so she handles that around here. I think even once i have the HS, I will keep the MF, cuz it’s worth having around too…

nuff synths… maybe, but no.

Microfreak do not have any on board FX ?

I had the MF and sold it to get a XD. I think the KORG is one of the most intuitive synths I’ve ever had. It’s very versatile and can do most sounds (plus even more with user oscs and Fx). It can sound classic analog as well as digital. Not sure about pluck sounds though. The envelopes are perhaps not that snappy (I might be wrong). The seq is great.

Had the Microfreak and it’s a cool gadget. but on it’s on it falls short IMHO.
(by it’s own I refer to no external effects or controller)
My thoughts on it for my use.

It’s a cool idea, and it looks neat. In practice it’s pretty much useless for anything but randomness. Since it’s highly sensitive to humidity and is affected by the moisture or lack thereof on your hands, the key does not respond equally to the same velocity. So while fun and cool to start with, it gets old real fast.

-Effects-
No onboard effects so the mono output is dry and flat, quite underwhelming, as first synth and you do not have any other references it might passable, but other than that you will need to run it through some external effect to be usable and come alive. Korg NTS-1 is proof that it doesn’t have to cost a lot to get some basic effects. Which of course makes it a good pair with the MF.

-Presets/MCC-
Microfreak needs to be connected to the computer via USB to connect to MCC. The connection is slow even though its USB transferring presets is slow and organizing them on the computer is not possible if you do not transfer them to the Microfreak first and then back to your computer. I think the fact Arturia uses “on the fly live sync” isn’t helping. The Keystep is a lot more consistent in its connection, while the Microfreak often needs a reboot to connect to MCC, this tested on both Windows 10 and OSX Mojave.

-Build/quality-
It is actually more than decent for the money, I mean it won’t compare to Elektron boxes or Minilogue XD, but it’s also in a different price category. Apart from the Keybed, I find the build to be good for the money. Encoders feel solid enough and it’s easy to navigate the UI with the controls albeit a little plasticky.

-Arp/Sequencing-
Fun and easy to use, although limited I would say it’s plus on the overall package.

-Bottomline for me-
The underwhelming output and its keybed was the main reason I could not warrant keeping it.

Cannot speak for the Korg but the MF is a beast if:

The Keystep is a lot more consistent in its connection, while the Microfreak often needs a reboot to connect to MCC, this tested on both Windows 10 and OSX Mojave.

True on Sierra as well.
MCC is painful.

MLXD owner here, so happy with it.

It feels ‘greater than the sum of it’s parts’ especially when paired with an Elektron box. Build quality is amazing, the effects are great so it’s very versatile but IMO especially good at atmospheric pads and deep, dubby chords etc. Aside from a bit of comp and EQ the sounds it makes feel finished to me.

Microfreak looks fun and I wouldn’t mind owning one for the price, but the XD seems like more of a proper instrument or studio tool than the MF after watching / listening to demos.

Thanks everyone for chiming in. Man tough choice.

Like I said I got a while so I’m going to use what I have already and dig even deeper! I see that some synths excel at one or two things and both have their strong points and weak points. I wonder if the Minilogue will get even more custom oscillators due to the NtS-1 DIY synth. Pretty brilliant move putting that out to give a taster of what the Minilogue XD and Prologue are all about.

I’m going to try to make plucks and pads on the Monologue AND get better with the DN Because I know the DN can do both well, just for me, not quickly. I bet with some practice I could get faster.

I do have outboard delay and reverb effects. I’m mostly trying to use the reverb as a giant send effect so I can create a “space” for the pads and plucks and percussion to live inside and go backwards and forwards and up and down in the mix.

Consider you already own the Digitone , the MF is kind of obsolete imho. The XD is a better match in terms of sound, build and UI imho.

I do not own the MLXD but if i where to choose between it and the MF it would be a no brainer to be honest. The only factor is budget as the MF is pretty much half the price of the MLXD.

yes. stick with digitone! you dont need freak or xd…

I recorded two livesets using only the Microfreak. I play ambient and sequencer music, maybe it helps you to get an idea of this synth. I like it a lot and use it more often the longer I have it.
They keyboard is a problem, back in the days where we used to play gigs with people I had one venue where the keyboard was not working at all. The other day it was very humid and it added random notes to what I programmed in the sequencer before. 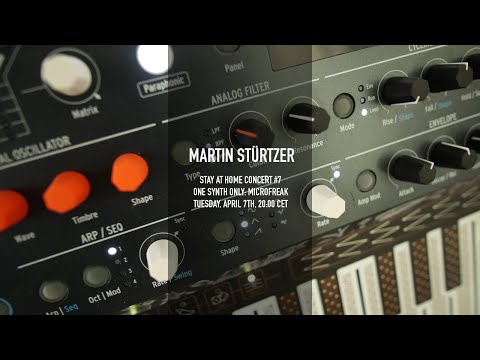 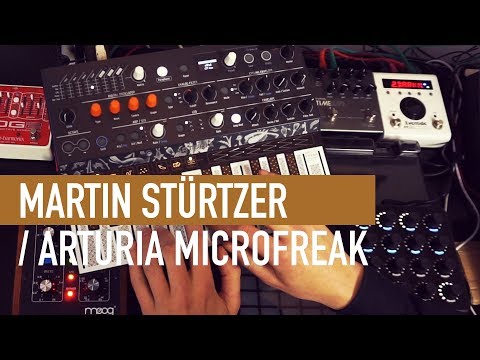 if you are experiencing issues with the keybed, you can adjust the sensitivity. i personally have not had any issues with this, but maybe the adjustment setting could help. certainly isn’t a key players keybed, but for those of us who don’t play, it can yield some cool results. Velocity isn’t really a thing on it, so it uses surface area for that. I also like that you can hold down the Paraphonic button, play in a chord structure, and then a single key press will get you that chord. You can also take this function and play “chords of chords”… Anyways, it’s fun, for the price, but yes other more expensive synths offer more options and probably a larger sonic palette.

After a bit of getting used to i like the keyboard of the MF a lot. You can play very fast, or tapping it. And Never had problems with sensitivity (never noticed at least, but i like a bit of unpredictability). So it may be very personal if you like it or not.