My brief background, in the 1970’s through the latter part of the 1980’s I was a Recording Engineer and Producer in NYC. I also owned my own 16 Track Recording Studio in my Home in Bayside Queens. I was one of the very first people to own an ARP 2600 in New York. I purchased it from Manny’s Music in 1972. I developed quite some skills using that machine and at one point owned two of them. I would often be called into various Studios to assist with Patch ideas. I also owned a Mini Moog. ARP String Ensemble and several other Synths.

Anyway, in the early 1980’s Sony Corp. took a look at entering into the arena of Musical Synthesizers. It think it was late 1980 when they introduced their first “Digital Musical Synthesizer” Code Name PCM at the Audio Engineering Society Convention at the Waldorf Astoria in NYC. The NY Staff at the Sony Showroom had no idea what it was or how to use it. Through a friend who designed their Booth I was hired a week in advance to demonstrate it at the Convention. I spent a week in the Sony 5th Ave. Showroom’s back room learning how it worked, how to program it etc. with no help from anyone, as the engineering team who developed it were all still in Japan.

For the entire week of the Convention I gave demonstrations of it with the little knowledge and experience I had with it but it did garner quite a bit of interest. The rumor going around Sony that it was going to be sent to Stevie Wonder after the show but I don’t know if that really happened ( I doubt it ).

My understanding at the time was Sony tried to gain more interest in it before going into any large production but gave up after Yamaha launched the DX7. I’d love to know if this machine or any others they may have made as prototypes still exist (I was told from Sony insiders that a few were made as prototypes with some different internal algorithms)

Here are a few pics of me giving a demo, and yes that is Tom Oberheim. 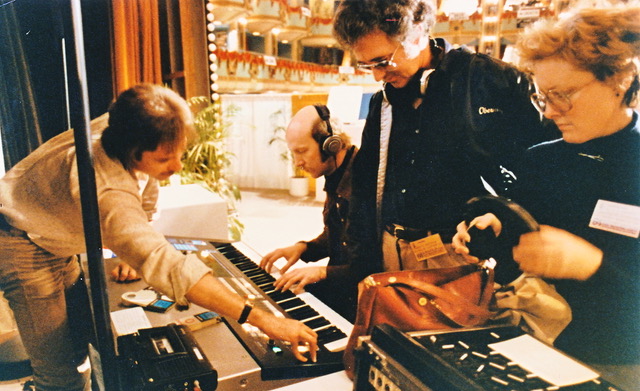 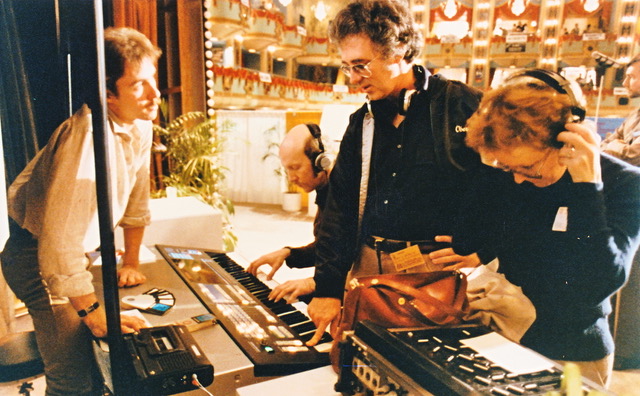 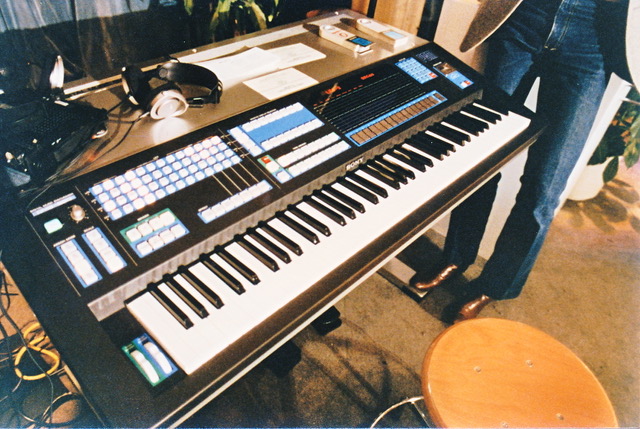 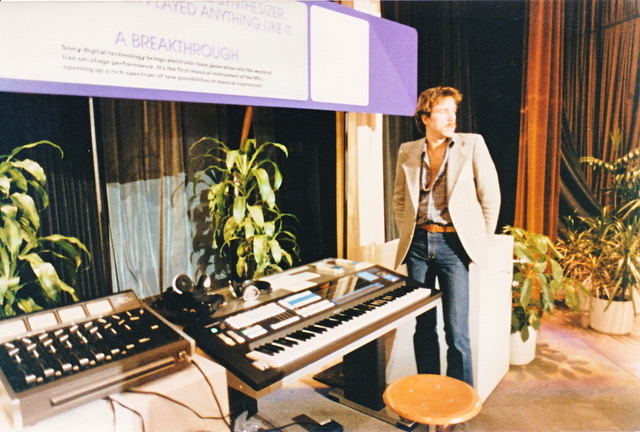 Welcome to the forum! That looks like a beast of a synth! Great story too, thanks for sharing.

fantastic story. i hope more info comes up. Also, what an awesome fit in the last picture.

Bunker, thank you. It was quite a monster. Truth is in the week I got to experiment with it I got some very interesing sounds out of it. When I got my DX7 I never was able to get that machine to do miuch more then the presets. The Menu Sysem was just so convoluted.

Is that not a young Les McQueen trying it out? 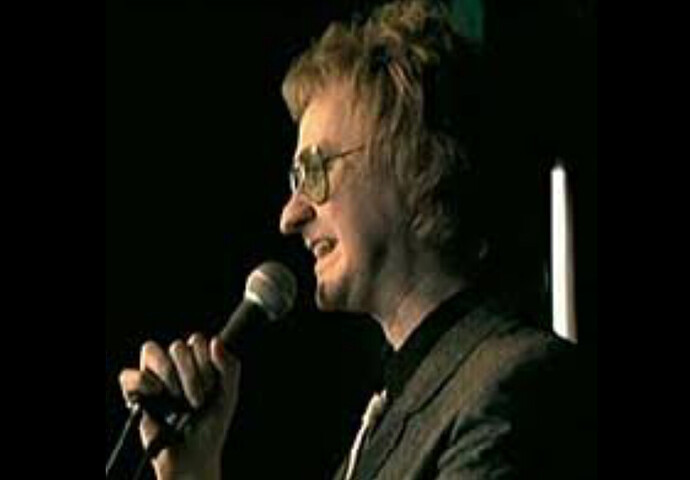 Looks similar but as you can see he is quite bald. LOL.

Welcome! That’s a great story. Looks like a ton of development had already gone into it… what did it sound like?

I’ve had a few experiences with synths that weren’t supposed to exist. One time there was an ad in the local classifieds that just said “EH Guitar Synth $275” and I had no idea what that could be, but was hoping maybe it was a vintage Electro Harmonix Microsynth. In reality it was a silver 3U rackmount guitar-tracking Minimoogish clone just called “Guitar Synthesizer”. It sounded serious but the tracking was terrible, and there was no midi or CV inputs (but I’m sure it could have been easily modded to have them…)

So I contacted Mike Matthews directly who was very nice but had no recollection of it- “It was the 70’s, man!”- but he asked around the office and had figured out it was one of two prototypes built before the whole project was deemed unfeasable.

Donovan, great story too. I was hoping my post would spark some good stories about some gear we never saw or heard of. The Sony Synth was very similar in sound to what Yamaha produced with the DX7. The Sony had these Magnetic Cards with a Magnetic Card reader on the side for saving Preset Sounds which was quite novel…when it worked. Being a Prototype I had some issues with it at the AES Convention.

I read elsewhere that this synth was designated DSM-320. Is that correct ?

Fascinating story! This is definitely not something I was aware of.

Jukka, the one I worked with was only designated PCM for A PCM synthesizer It used samples as it’s primary sound source. PCM stands for Pulse Code Modulation. You can see the PCM on the top right in one of the photo. However, you are correct, I do think one of the Prototypes was designated DSM320. It looked very similar. Here is a rather poor photo of it.

ha ha, i guess that’s one kind of desktop synth

Interesting to consider a hypothetical universe where Sony did enter the market, and produced many families of products, changing the competition – maybe the DX-7 was just a sidenote – and being one of the legacy companies for forty years now. Imagine what they might have innovated.

Cool story! It looks like it would have been an expensive synth–lots of electromechanical buttons, microprocessors and memory. What a trip, trying to sort out a new prototype synth in a few days. My father was an electrical and acoustic engineer and used to be active in AES. He met Bob Moog there, so I guess it was useful as a venue for early synth makers to make contacts.

In about the same period of time ( 1981 ) i worked with someone, who will remain nameless, who built a cool digital polyphonic keyboard synth. It was virtual analog, though i don’t think that was what that was called back then. He put an analog filter with it. Don’t recall detail, but i do recall it had some cool features. The processor used was unique for synths, the AMD AM29116, a 16 bit bit-slice processor, that ran extremely hot and fast, written all in assembly language. Two or three people put an awful lot of work into that prototype, but decided that they could not compete with the “cheap” Japanese synths of the time. Their company name was to be Hex Music.

He and i a year or so later went on to do a high end, relatively inexpensive graphics computer ( with bit-blit ), using the same processor, that was more a high end specialized Mac, back in the early early Mac days.

A Japanese Fairlight, so to speak? Very interesting.
(without the abilty to actually sample I guess… so rather a proto-rompler)

The top right area, is that an LED matrix?

What a cool story, crazy that they had to hire a complete outsider to demo.
Great photos as well, thanks for sharing! (and welcome btw…)

Great story! I saw that photo of the DSM 320 a while back, but couldn’t find any more info on it.
Please tell us more about the synth and how it worked

Bob was a regular at the AES Convention. I use to see him all the time and had the privilage to sit with him on a few occasions and talk about the current state of the music industry and how his and other Synthesizers were really shaping the future. I was still just a kid in my twenties but had been in the music and recording industry since I was 17. I first met Bob quite by chance. I was invited by a fellow Chief Recording Engineer friend of mine to Eric Siday’s apartment in Manhattan. He wanted me to meet him and see some of the things he was doing with a Moog System he had just commissioned. I remember it was 1972 because I was just 18 and I had just purchased my ARP 2600 earlier that year.

I knew of Eric Siday’s name from his work as a session musician in a London jazz and dance band
I learned about his Maxwell House commercial where he used an electronic type of machine to creat the Perculator sound. If was sometime later that he commissioned Robert Moog to create the first percussion synthesizer, which he used in his television work.

Anyway I walk into his apartment and who is sitting right beside him, yes, Robert Moog. I was just in awe. I sat there with them for what seem like forever watching and listening to the amzing sounds coming from his Synthsizer. I was hooked!