What was your first studio recording experience

Shamelessly piggy backing @rob_lee thread on first bits of gear I got thinking about my first time recording in a studio. What are your memories of the first time you got the money together to go in the studio and make a recording? I’d love to hear your stories.

Mine was with the 4pc guitar band I played bass in. I responded to an ad in the Loot and we booked 8 hours in a little 8 track called FAB In Higher Broughton, Salford. Would have been late 92/early 93. It was in the guys cellar in a big Victorian terrace house. Don’t remember the desk but I’m sure the multitrack was a Tascam 38 or something similar from memory. He had a really cool little set up. Anyway we got three tracks done with overdubs etc and we were buzzing! It was a per hour rate but the guy cut us a deal. Can’t remember what we paid but I can remember us discussing getting the money together ASAP to go back in there. As it happened second time was in Star Trax behind Piccadilly station. Happy days!

Used to be a store here called Rock City then changed to Sound Control they went bust though, had a mate that worked there and let me record on all the gear.
I started messing with keyboards back in 1988 whilst still Dj’ng… one day I had made a few patches for a Yamaha SY85 lol and sent some demos out to places like Waldorf Music etc… Well later in 2006 I started talking to Stefan and Wolfram and they started sending Blofeld etc for sound design etc, I also made the factory patches in Pulse 2… have a look prefix RL - They’re my sounds.
Also did stuff at Motu, I also did stuff for Xenophone Hypersynth and stuff for Rob Papen and Urs Heckman and more but Waldorf always looked after me over the years.
I still do sound design but I want to focus more on my live stuff Bunker.

My first studio experience was in 1991.

I paid to go to a professional studio in Redhill. It was called F.O.R. Studios.

I spent 2 days there creating 3 hardcore/rave tunes. I have some photos I’ll try and find.

The next experience was at a studio called music garden or sound garden in Arnos Groove.

That led to the creation of a relatively famous/renound sample cd, Called Danger 1 (Dangerous CD company) + me working at Frankfurt Musikmesse launching the sample cd there.

The guy in this photo is Brian Teasdale. He was the owner of the studio & The Dangerous Cd Company. This was taken (by me) at the Frankfurt Musikmesse in 91 or 92. 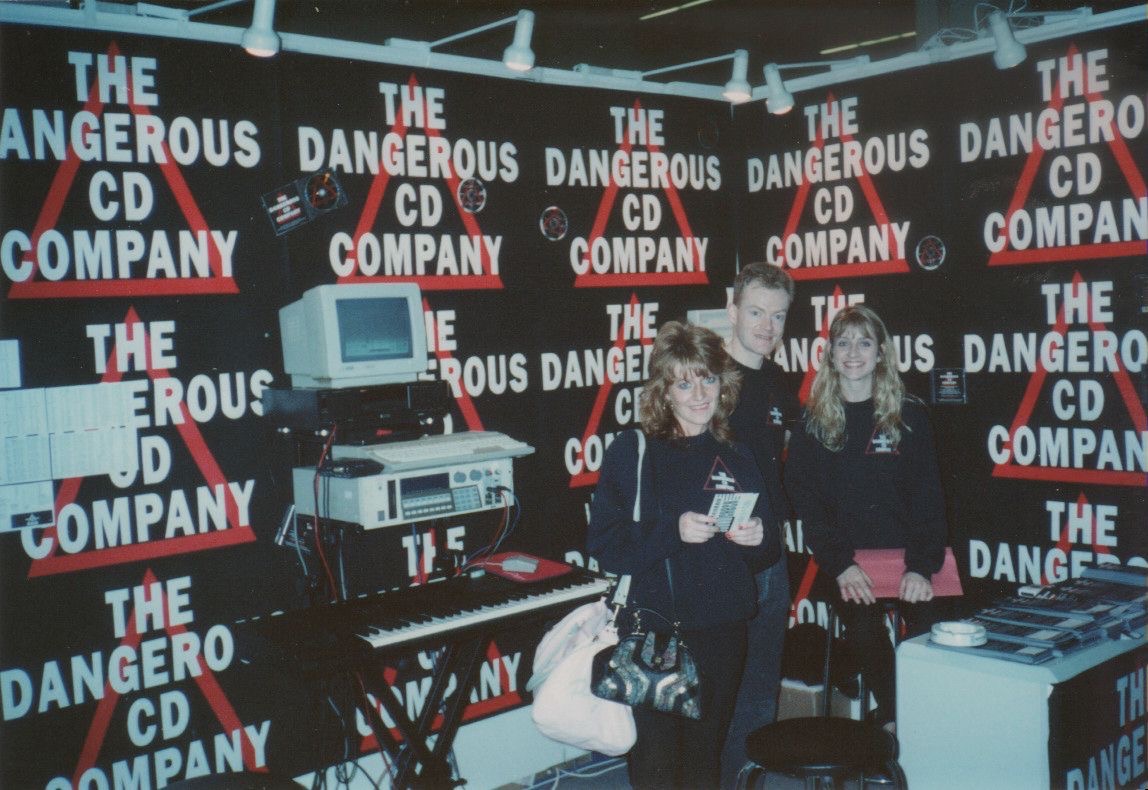 Here’s some info i posted a few years back, on a few other forums.

"The samples for Danger Vol 1 were recorded/compiled at a studio in Arnos Grove. The studio was called either Sound Garden or Music Garden Studios (I can’t quite remember) A lot of the samples were taken from my own record collection. The guy behind the Dangerous Cd Company is called Brian Teasdale (RED) I’m not entirely sure about the content of Volume 2 though. I think this might have been released after i stopped seeing Brian.

I first went to his studio around 91/92 to record some Hardcore demos. i was about 19 years old. When Brian heard the records i was sampling from he asked if he could borrow my collection. That’s how this sample cd came about. Together with Brian’s sister & girlfriend we went to the Frankfurt Musikmesse & launched the cd there.

That first night after Musikmesse was very bizarre. Brian & me ended up in a dodgy situation one evening. Brian liked his drink. He passed out in a bar & i was unable to rouse him. This young lady in the bar offered to take us back to her apartment. We all ended up in her bed. Then there was a knock at the door. She freaked out & ran back in saying it was her boyfriend, back from National Services. He was yelling telling me he was going to get his friends to fuck us up. I was shitting myself. Brian thought it was hilarious. We managed to get out & find a taxi but Brian said he didn’t know where we were staying. We basically drove around Frankfurt until morning & went straight back to Musikmesse. A fantastic memory now, but i barely knew Brian & the whole thing freaked me out.

I don’t think i saw much of Brian after that. Maybe a few times, but we eventually lost contact.

I tried to contact him a few years back. He’s still around but he’s had health issues. i thought it best to leave things as they were"

Here’s one of me in 1990, DJing in my bedroom. The guy in the background covering his face is Dub Techno producer G.R.I.T. All his earliest demos were created here. 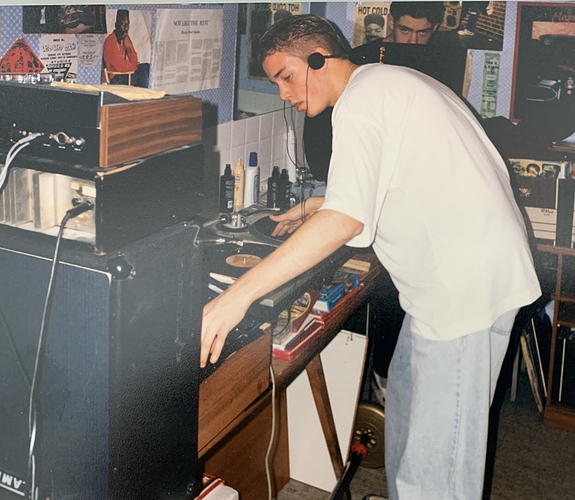 First time was 90/91, use to go to a local studio in Essex that was fully kitted out with all the classic dance/techno gear, £60 a day, we used to get 3-4 tracks recorded some days, everything was recorded straight to stereo DAT, no multitracking. We used to go in with no gear or material and make it all up as we went along. Probably recorded 30 tracks there, some were released as 12” on small labels, for most of which we did not get paid, shitty labels, shitty distributors.

94/95 used to record at ASM studios in Kennington, London right opposite the Oval cricket ground, it was a studio in the basement of the music shop of the same name, same kind of setup as the other place, the record label owned the studio and we had as much time as needed to record the album, I think we ended up with about 30 tracks there too.

Interesting times for a younger me, learned a lot of lessons the hard way, the best and most valuable of which was to not let others influence my artistic decisions, I was far too easy going and took too much notice of other people, when I’d have been better off doing my own thing. I trusted people too much, even if they didn’t really have a clue, which turned out to be the case most of the time.

Since then I’ve been a lone wolf, doing what I want

early 1992.
it was a recording of my very 1st basement punk band in live-in-the-studio format.
we’ve done 30 min recording in a single evening.
it was really really cheap for us, because sound engineer needed some band to try out new mixing desk

p.s. basement should be taken literally here — it was in a basement.

Did a load of remixes back in 91/92 etc on white label mainly mixed in the back of the music store.
Last couple of Tech House tracks I did was back in 2011, couple here below, might release some stuff next year with the Elektron gear.

BACK TO DETROIT - BEATPORT

around 1993 in one of those booths at an amusement park. the ones where they play the track without vocals and you sing over it, then you get a CD of it to take home. me, a skate buddy and two girls we were fighting over sang Beastie Boys: “(You Gotta) Fight For Your Right (To Party)” and it turned out absolutely awful.

Maybe 1993 ,somewhere in Denton TX.
Played in a psych band called Thorazine Dreams.
We had been recording our stuff on 4 tracks. Lot’s of effects and crappy equipment.
We saved up some money to go to this guys studio and record all the tracks live, and then add a few overdubs.
We would say stuff like, “We want to put this amp at the end of the hall turn it all the way up, record it, then wash it out in reverb.”
They guy said, “Why on earth would you want to do that!?”
That’s when we knew we F’d up and should just try and mix what we got and get out of there.
It turned out nothing like we had hoped.
Our studio recordings never did.
4 track cassettes and reel to reels seemed to be our only success.

Had a sort of similar experience at one of the Star Trax sessions. Out singer was part genius, part, well, I’m not too sure… anyway when we were Overdubbing he could get really picky and one particular time we spent a full day arsing about to the point there was nearly a full blown fist fight…the poor engineer didn’t know where to look😂

Needless to say he paid for the extra day(s) incurred.

Same session the engineer had our rhythm guitarist playing the engineers own vintage Gibson 335 while he bent the neck back and forth for vibrato…his idea too! Nutter!