I recently set this peavey pc1600 to control my rig which includes an AR. I had to utilize an iConnect2 to filter/route my midi messages so they wouldn’t overlap. Working out well here 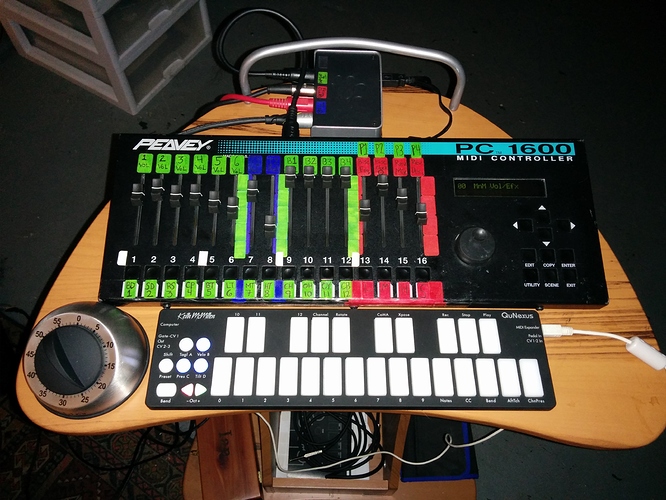 I have a TFP, waiting for bomebox to become available so I can start making various AR-specific scripts for the TFP

I’m setting my sights on reacquiring an AR. Though a controller will be absolutely necessary for various reasons. Mainly I’m thinking at least something to control the volumes of the tracks so that whatever I feed in will sit comfortably within the earthquake of the RYTM. I hadn’t thought of using my Maschine controller for some odd reason. But that will be brilliant! AND using the pads to trigger scenes while the knobs can create a nice option for ushering in perf modulations that I need to be precise and stay while using the unit pads to have a sporadic wavelike nature to them.

Also that means I don’t have to buy another controller!!!

Thanks for the idea!

Even though I have a lot of controllers already, the upcoming faderfox analog rytm controller (MX12) tempts me… Mostly because of its DIN MIDI i/o. Two ins and outs means that I wont have to faff around with merge/split boxes

LarsErik, interesting solution. I just tried that with no success. How do you set it up so it works? Any templates? Thanks

Control All on Rytm

It’s not a controler, but provide lot of lfo and other goodies : Squarp Pyramid.
I keep my hands on Rytm, but boost it’s abilities with another sequencer.
So cool.

There are multiple ways, but basically you just set each pad to send to the corresponding midi channel of the AR. The MIDI specification holds the key to what CC values and midi channels to use.

I’ve just been toying with my ancient M-Audio Trigger Finger controlling the AR’s track levels with its sliders and pots. I much liked having hands-on control over those, but not so much the form factor of this controller for that purpose. Looking into better options, though not many around with 12 sliders (Faderfox MX12). Though I could probably live with 8 faders and the remaining 4 track levels on pots.

Having performance controls mapped on the midi controller as well would be cool. Then I’d just flip between mutes and scenes on the AR.

One thing I’m wondering about: how do you guys/girls deal with parameter jumps when moving to a new pattern and kit while the MIDI controller is still in the previous kit state? Especially thinking of live gigging here.

A controller with parameter value feedback via MIDI in and snap/take over mode could solve that but I don’t think many do that (again, MX12). I do have an elderly BCR2000 that would do it but it’s way to large for this purpose (trying to keep my live setup compact) and the rotary encoders aren’t very nice for mixing levels.

For feedback to work I’d have to loop back AR’s MIDI output into the controller. I have 5 devices MIDI clocked by the AR, meaning I’d either have to use a MIDI splitter or loop back at the end of the chain. This also means most of these other devices have to have MIDI CC i/o turned off, given that the AR uses 13 channels. For my current setup this could work.

Anyone else cracked this nut and wanting to share thoughts/experiences?

Also, I think I once read there’s a special MIDI message that makes the AR output all its parameter values. Have I dreamed that or is it real? Couldn’t find it back…

No, that’s on the OT. You need to use sysex to request the values on the RYTM.

Ok thanks. Where is this documented? Didn t see it in the midi charts.

Where is this documented? Didn t see it in the midi charts.

The Rytm SysEx implementation is not officially published. Certain intrepid developers have investigated it.

I see. I m a max/msp expert and have much electronics experience so not scared of a little hack ‘n dev work

But say such route is not taken, and referring back to my earlier questions, then when switching kits on the AR there is no other way to match a controller’s knobs and faders to the new kit settings other than moving each knob/slider to make the AR parameter jump to it?

Correct, you would need to send the sysex Kit Request message, then decode and parse the data using libanalogrytm (https://github.com/bsp2/libanalogrytm)

I had found that in the meantime

But it s a bummer such thing won t be possible from a controller like the MX12. Feature request sent to Elektron!

So back to my questions: how do people deal with the parameter jumps in a live setting?